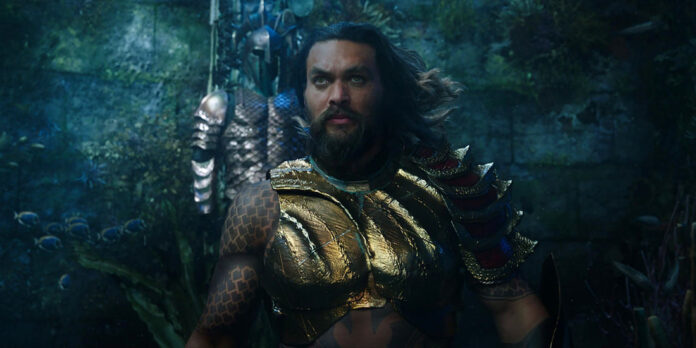 THE STORY – Aquaman finds himself caught between a surface world that ravages the sea and the underwater Atlanteans who are ready to revolt.
​
THE CAST – Jason Momoa, Amber Heard, Willem Dafoe, Patrick Wilson, Dolph Lundgren, Yahya Abdul-Mateen II & Nicole Kidman

​​​​​It’s no secret that the DC Cinematic Universe has had some serious missteps despite the money it has brought in. After the extremely mixed reception to 2017’s “Justice League,” it was clear that it was time for the franchise to change. James Wan (“The Conjuring“) delivered on that change with this year’s “Aquaman” by providing a bright, colorful world that doesn’t shy away from infusing the film with both humor and a more classic superhero flavor. In addition to that challenge, there was the need to make the character of Aquaman more interesting than he is generally thought of. Being a man who can breathe underwater and talk to fish isn’t high on many people’s list of heroic traits. The solution to this was to provide a rich backstory and several strong acting talents as side characters who make their performances more interesting than the film has any right to be based on the script.

The film opens with a voice-over by Arthur (Jason Momoa), who tells us the story of how his lighthouse keeper father Tom (Temuera Morrison) finds his mother Atlanna (Nicole Kidman) washed up on the rocks, how they fell in love, and how Atlanna was eventually dragged back to Atlantis to face the arranged marriage she had fled. We are then returned to the future, where Arthur is rescuing Russian submarines and playing the hero at his leisure. It isn’t long before another Atlantean, Mera (Amber Heard), comes calling to warn him of an impending war on the surface by Atlantis and she demands he come with her to help put a stop to it. After an unnatural tidal wave almost brings total disaster to his life Arthur agrees to accompany her beneath the waves.

The film changes perspective in one of the first truly gorgeous shots of the film, a sculptured stone structure deep in the ocean where we are introduced to Arthur’s half-brother King Orm (Patrick Wilson) as he meets with another Atlantean King (Dolph Lundgren). The scene serves to act as one of the many info dumps on the background of Atlantis and to give us a glimmer of insight into the workings behind the film’s villain. When he arrives in Atlantis, Arthur learns the hard way that in order to stop the war, he must find the lost Trident of King Atlan which lies somewhere deep in the Sahara Desert or his world may be lost. From there the film is almost like a roller coaster as it takes us through a fast-paced adventure of Arthur and Mera desperately struggling against long odds to save their worlds. Unfortunately, it also takes long and awkward pauses to show Arthur’s experiences growing up, which may provide some helpful background into the character but it also slows the story down at some of the most inopportune times.

Visually “Aquaman” is the most brilliant of all the DC films, with visual effects that put the others to shame. The underwater cities are filled with flowing architecture, glowing plants and animals and unique technology that truly makes it feel like a different world. There are several different cultures that are part of Atlantis and each one has its own design and while we don’t really get to explore more than two, what we do see is intriguing and leaves the viewer wanting more. Since so much of “Aquaman” takes place underwater, more than half of the scenes are digitally created and while most of them are very well done, the realistic effect breaks down once the action really starts to speed up.

In “Justice League,” Jason Momoa was able to stick to the comic relief and since his character was not front and center his limited acting range was easy to overlook. In “Aquaman” however, he was required to shoulder a much bigger load and whether it is the script which makes him something of a thoughtless bro or Momoa’s own lack of skill, his performance as Arthur feels formulaic and somewhat forced. Perhaps the creative team and casting folks knew this as they surrounded him with some great actors and gave them larger roles than is usual in a superhero film. Amber Heard does a great job at elevating Mera with her performance. Nicole Kidman and Temuera Morrison have only a few scenes together, but when they are both on screen their chemistry sparks and their relationship has the most emotional weight of the entire film.

While “Aquaman” is one of the better DC films, it is still fairly uneven. It gives us a glimpse at a whole new mythos and makes the world of Atlantis feel ancient, creating a fantasy story that offers something different for DC fans. But it also tries to cram in the Arthur character from the previous films whose wisecracking, cynical ways are at odds with the tone of the rest of the movie. The first 30 minutes, in particular, are all over the place as the film struggles to gather all the players, set up the story, and remind us just how cool Arthur is with far too many quips and needle drops. Once the adventure has begun, the film begins to coalesce into an interesting story that mostly keeps viewers engaged despite its near 2 and a half hour run time. “Aquaman” may not be the best superhero movie of the year, but it is a huge step forward for DC in regard to allowing their characters to have a unique style and storylines, which is hopefully a sign of better things to come.