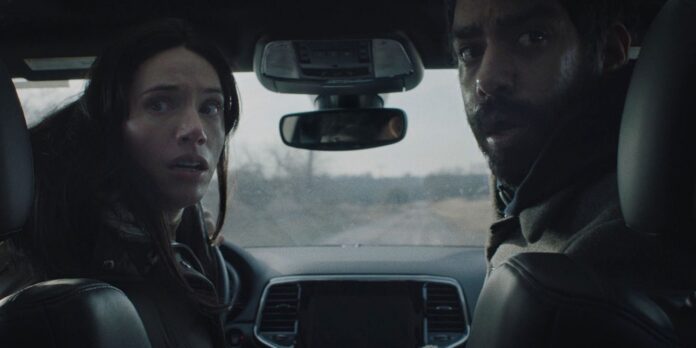 THE STORY – After humanity confirms the existence of an afterlife, a research scientist launches a study in which volunteers commit painless suicide. Traveling from New York to San Francisco, two strangers share a rental car as they go to end their lives.

There are several avenues one can take when attempting to craft an intimate character study that explores the inner lives of certain individuals. A quiet backdrop that hones in on the surrounding intimacy is often effective, but there are methods one can employ to shape the texture of this setting into something unique. This is where the realm of science-fiction can play a role, adding an element of intrigue and inventiveness to make a piece of story feel utterly unique. “Next Exit” places itself in an environment slightly askew from the modern era but infused with resonant internal commentary. Its results are fascinating, even if it struggles to coalesce into a completely satisfying whole.

The film is set in a time when a major scientific breakthrough has occurred. Dr. Stevensen (Karen Gillan) has just provided documented proof that ghosts are a real phenomenon and that some form of consciousness exists after death. This drives the world into a chaotic frenzy, but further study is calling for volunteers to participate in more research. This requires a select few coming to a facility and willingly terminating their life. Among these participants is Rose (Katie Parker), a loner with a dark past who is outrunning her literal demons. By happenstance, she meets Teddy (Rahul Kohli), another traveler who has enlisted in this operation. While antagonistic to each other initially, their long road trip forces them to forge a deeper connection, revealing more about the other’s past and what they may truly want from an uncertain future.

The bulk of the success to be found here lies in the interplay between Parker and Kohli; both do a commendable job of providing compelling portrayals. Parker instills within her role a harshness that feels authentic to a person grappling with a damaged core, and she taps into a nuance that elevates many endearing qualities. Kohli starts as a more boisterous persona, full of wit and charm that harbors his own profound sadness. Between the pair, Kohli stands a little more impressive as his performance feels more layered in the swings of emotion he must convey and does deliver some devastating moments as well. Yet, both share a warm chemistry that is nicely tailored to inviting the audience along this journey. As Gillan provides merely an extended cameo in a hollow role, the main focus of this small cast is placed solely on the main protagonists.

Writer-director Mali Elfman makes her feature debut here, and there is an appreciation for the minimalist filmmaking used to establish an atmospheric ambiance. When the narrative’s focus is tightly honed in on the dynamics between its central players, the storytelling is far more successful. More often than not, however, the film struggles to overcome the sluggish momentum, hindered greatly by the lack of detail in the overall world-building. The genre elements may be only there to set up the stakes, but such aspects to give texture to this place are muddled and shallow. The film also wrestles with maintaining a consistent tone, sometimes indulging in somber dread but also going for a lighter touch. This imbalance is only exacerbated by the erratic score that completely undermines nearly any sincerity. Elfman’s efforts have a solid foundation with an execution that sometimes lacks cohesion.

There is a captivating observation at the heart of “Next Exit” that is valuable to dissect. The nature of grief and regret being carried as a burden while staring directly into an inevitable demise is a thematically rich tapestry to analyze. There are many points where this film gracefully examines this premise with a tender and engrossing touch. At the same time, there is a frustration with the overall method of the storytelling, leaving many sections feeling disorganized and unfulfilled. Still, the central performances greatly keep one engaged with the material, which goes a long way in cultivating an alluring quality. The experience is a flawed yet enticing tale that excels far better at its narrow viewpoint than a larger plot.

<b>THE GOOD - </b>The endearing performances from Katie Parker and Rahul Kohli are the highlight of the film, each capturing a captivating persona with profound sadness to make them engaging portrayals. The intimacy of the character study is the strongest element of the storytelling, with some emotionally resonant themes to explore.<br><br> <b>THE BAD - </b>The narrative lacks details in the world-building to give sufficient texture, leaving an impression of a hollow and muddled environment. The film is tonally inconsistent, with mood swings that break the flow and contribute to a sluggish sense of momentum.<br><br> <b>THE OSCAR PROSPECTS - </b>None<br><br> <b>THE FINAL SCORE - </b>6/10<br><br>"NEXT EXIT"