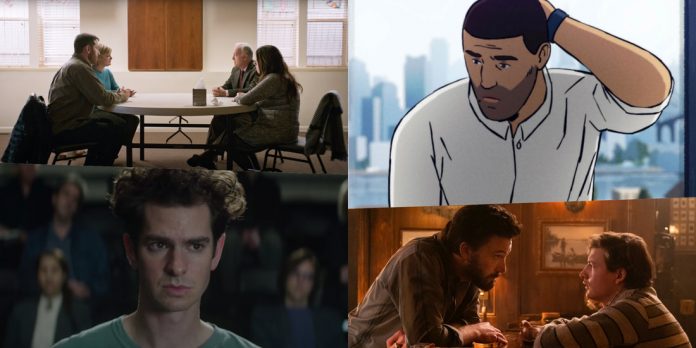 By Robert Dougherty
​
​In a particular context, the prospective field for Best Picture looks pretty crowded, with early festival breakouts like “Belfast,” “The Power of the Dog,” “King Richard,” “Spencer,” “Dune,” and “The Tragedy of Macbeth” and projected fall contenders like “West Side Story,” “Licorice Pizza,” “Nightmare Alley,” “House of Gucci,” and “Don’t Look Up.” With a field of ten, this lineup would be more than enough to fill it out – assuming this will be the lineup by the end.

​In truth, the odds are good that at least one or two of the big five fall mystery films will flop out of awards season and that at least one or two of the six early festival favorites will not have the legs or support for the long run. Yet, at this early stage of awards season, these eleven movies are far and away ahead of the rest of the field, to the point where no other film is on more than two Best Picture ballots among Next Best Picture’s team of prognosticators.

Nonetheless, it seems a safe bet that something we’re not paying attention to yet will break out and forge its place in the final ten. At this point last season, not many envisioned “Sound of Metal,” “Promising Young Woman,” or even “Minari” as Best Picture nominees, let alone winners in other categories. By that measure, a few movies outside of the top eleven early contenders are bound to make a significant charge once room opens up – even if it’s hard to see what those movies could be right now.

There are still some possibilities out there who have buzz and prospects in other categories but who might not be seen as likely Best Picture nominees yet. Some of those possibilities are listed below, in advance of their potential rise up the charts if a few things break their way.

“Mass”
The big test for this Sundance critical favorite is coming soon enough, with its forthcoming limited release on Oct. 8. Though its incendiary subject matter and acting tour-de-force made headlines at Sundance, distributor and relatively inexperienced Oscar season studio Bleecker Street chose not to make a similar splash in the Telluride, Toronto, or New York festivals. Now with a fairly early release to the general public, will its award season buzz drop off soon afterward as fellow Sundance favorite “CODA” did, or can critics and pundits keep it in the conversation for the long haul?

Should they do so, it will immediately boost Jason Isaacs in a wide-open Supporting Actor category, Ann Dowd in a crowded Supporting Actress category, and perhaps even the script in the competitive Original Screenplay category. In such a scenario, Best Picture prospects would also go up before too long – and if “Don’t Look Up” doesn’t pan out, then “Mass” could supplant it as the most topical and tragically relevant film in the Best Picture field.

“tick…tick…Boom!”
If “Don’t Look Up” is a letdown, then it would leave room for a different Netflix film to join “The Power of the Dog” as the studio’s second Best Picture nominee. Although the likes of “The Lost Daughter,” “Passing,” “The Hand of God,” and others have already made their case, “tick…tick…Boom!” may have the tools to do more than that.

Andrew Garfield is already poised to put this movie on the award season map if his early Best Actor buzz as “Rent” creator Jonathan Larson pans out. Between that and having Lin-Manuel Miranda make the campaign rounds for his directorial debut, Netflix could easily swing plenty of voters to sing its tune. And in a year that looked so promising for musicals, yet hit speedbumps with the disappointing box office performance of Manuel’s own “In the Heights” and the infamy of “Dear Evan Hansen” – with “West Side Story” and “Cyrano” still to come – it would be ironic if a less hyped musical were the one to carry the genre’s torch at the Oscars instead.

Any of the year’s best foreign films
After “Roma” and “Parasite,” foreign films took a step back from the Best Picture race in 2020 – unless one counts “Minari” as a foreign film like the Golden Globes did. But in 2021, there’s already a case to be made that the Best International Film category should have expanded to a field of ten as well.

Not only does this field have a potential International and Animation nominee in “Flee,” it has “Parallel Mothers” with potential Best Actress nominee Penelope Cruz, critically adored films like “The Worst Person in the World,” “A Hero,” “Petite Maman” and preseason favorite, “The Hand of God.” Even Palme D’Or winner “Titane” is unlikely to break into this field, though that’s as much for its extreme content as it is for France’s other potential submissions.

This is an era where foreign films and nominees have broken barriers in the last few years, even before Best Picture expanded. Now in a field of ten, it should presumably be much easier for movies outside of America to break into the top category. Should a few prospective Best Picture favorites slip up, there are more than a few foreign possibilities this year – the only question is which one will get a big enough push to make the leap.

“Being the Ricardos”
Last year Aaron Sorkin’s “The Trial of the Chicago 7” was presumed as the Best Picture leader much of the season, even when reviews and Film Twitter buzz fell way behind the likes of “Nomadland.” It took an Oscar night shutout to realize its frontrunner status was hyped up – or feared – long after it stopped being a genuine Best Picture threat. So in that context, maybe this year’s Sorkin streaming movie about controversial real-life figures from decades past will do far better under the radar.

As soon Amazon releases a trailer or any footage of Nicole Kidman as Lucille Ball, Javier Bardem as Desi Arnaz, and the latest gaggle of Sorkin one-liners, the usual rounds of arguments over Sorkin and his treatment – and casting – of history will begin again. Unlike last year, few are doing any advanced awards speculation or handwringing over it, so maybe this time, Sorkin will surprise people in more ways than one. If so, it could be Amazon’s big Oscar push, Kidman’s return to Oscar season after spending years in Emmy season, a chance for Bardem to join the Supporting Actor masses if they’re still up for the taking, and another chance for Sorkin to be celebrated and denounced anew.

“Swan Song”
If this prospective Apple+ challenger breaks through, it will officially confirm there can’t be one award season without Glenn Close hanging over it anymore – at least until she finally wins something for it. In contrast to Close, Mahershala Ali won two Oscars in basically his first two tries out of the gate. But “Swan Song” may let Ali leap out of Supporting Actor and into Best Actor this time, as a terminally ill man in the future given “an alternative solution” for his impending death by Close’s doctor.

Its AFI Fest premiere in November will answer if it has a real case to make. If it does, both Ali and Close’s track records suggest it could be a long one, win or lose. Yet Apple+ hasn’t done well so far in its first shot at Oscar season with “CODA,” and time will tell if “The Tragedy of Macbeth” will give it a better shot beyond nominations for Denzel Washington and Frances McDormand. If not, “Swan Song” could be Apple+’s best opportunity for a bigger breakthrough – though Ali and especially Close haven’t always needed their movies to do much for their campaigns lately.

“CODA”
What if Apple+ didn’t completely ruin “CODA’s” storybook tale by skipping the fall festivals and putting it on streaming in the dead of August? And if “Swan Song” doesn’t pan out and “The Tragedy of Macbeth” is only palatable enough to get Oscar votes for Washington and McDormand, can Apple+ pivot back to pushing its first award season hopeful?

“CODA” had the early makings of hitting the Academy sweet spot, in being a step forward for inclusion for the deaf community, and being abroad, crowd-pleasing and occasionally musical tearjerker. Now the likes of “Belfast” and “King Richard” have taken over the baton for broad crowd-pleasing family dramas this season. Yet if Marlee Matlin can stay in the Supporting Actress crowd, Troy Kotsur can get into the Supporting Actor conversation, and if Apple+ spares a few bucks to push Sundance’s biggest winner all over again – only the right way this time – then “CODA” could still help make 2021 a comeback awards season for sentimental family films after all.

“The Tender Bar”
The existence of director George Clooney’s latest film only got on the radar a few weeks ago, but word from its first screenings this past weekend stands to keep it there. At the moment, it may mostly look like an awards play for Ben Affleck, in a potential Supporting Actor crashing part as the uncle and favorite bartender of a fatherless youth.

Yet if there’s room and time for Affleck to make a run – after falling short on the other side of the bar with “The Way Back” last year – and if fellow Oscar-winning writer William Monahan can squeeze into a shaky Adapted Screenplay category, then perhaps the momentum won’t end there. With the resources of Amazon, the campaign experience of Affleck and Clooney, and an expanded category to benefit from, there could be a fair share of tenderness for this late arrival.

What do you think will be nominated for Best Picture this year? Check out the NBP team’s latest predictions here. Let us know your thoughts in the comments section below or on our Twitter account.