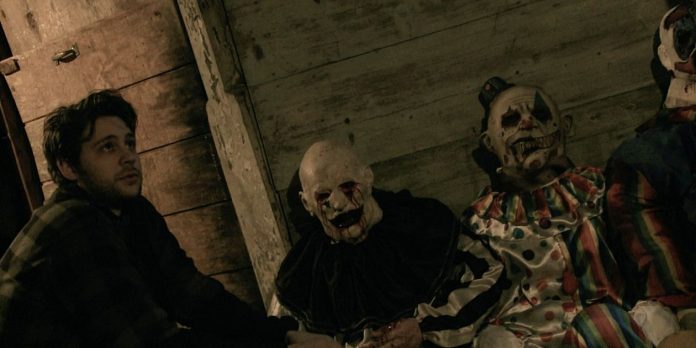 In honor of Halloween, I’ll be exploring five underappreciated horror films throughout the month of October. This week, I’m making the case for why you should watch the found footage film “Hell House LLC.” Check out my previous articles on “Lake Mungo” and “The Village.”

Found footage horror films are nothing new, but the trend really accelerated into the zeitgeist with 2009’s “Paranormal Activity.” The unexpected success of this micro-budget film made studios and filmmakers realize that they could do a lot, or rather, earn a lot, with little expense on their part. A veritable avalanche of cheap found footage horrors followed, often to box office success and critical dismissal. And while they may not be the most artistically minded endeavors, I have to admit that I often find myself drawn to this sub-genre. Something about the scrappiness and resourcefulness of these films appeals to me. But obviously, I’m more often than not let down by their actual quality and scare factor. So, when someone recommended “Hell House LLC” to me, I was skeptical. Upon watching, however, I was delighted to find a found footage horror film that’s well-constructed, fun, and truly terrifying.

The film utilizes a mockumentary style to explore the tragedy that occurred at an amateur haunted house in upstate New York. The fictional investigative team is given first-hand footage by the only surviving member of the attraction’s crew (Ryan Jennifer Jones), and they use these tapes to try and piece together the mystery of how exactly multiple people died in the haunted house. The first footage we see of the house is actually shot by an anonymous member of the public who attended it and made it out alive, and the ambiguously terrifying video we see makes the audience curious and nervous to see what exactly happened.

The structure of the film is smart and helpful in building tension. Much of the early footage shows the crew setting up the haunted house, and the film uses these moments to subtly teach the audience the layout of the house. This will be important later on when the camera often flies through the house and it’s necessary to know without the help of dialogue where exactly we are. What further helps put the audience on edge is just how lackluster the haunted house that’s being put together is. The scenes and set pieces the characters create lack coherence or structure, which makes the genuine scares they are subjected to even more terrifying by comparison. As most found footage movies do, “Hell House LLC” keeps the earlier scares minimal so that they may build and build in intensity before the film’s finale unleashes everything it has on its poor victims.

Let me tell you, this film has some damn good scares. There are certain sequences that frightened me so deeply that, the first time I watched the movie, I had to pause it and finish it the next day when the sun was out. I won’t reveal specifically what the film does to scare you, but it uses old-fashioned practical effects and classic suspense-building techniques to great effect. Oftentimes, the frights come from simple “now you see it, now you don’t” tactics, and it’s genuinely surprising how well they work.

The name of the game in “Hell House LLC” is set-up and pay-off. The film is so good at establishing things early that will only become relevant much later on in the film. This allows the final act’s set pieces to move at a propulsive pace, and the themes and images that were only briefly mentioned or shown early on are finally given their moment in the spotlight in terrifying fashion.

“Hell House LLC” is a worthy successor to the best found footage movies that came before it. It owes a lot to classics like “The Blair Witch Project,” and it carries on its legacy admirably. Have you seen “Hell House LLC?” What do you think of it? What horror movies are you watching for this year’s Halloween? Let us know in the comments section below or on our Twitter account.