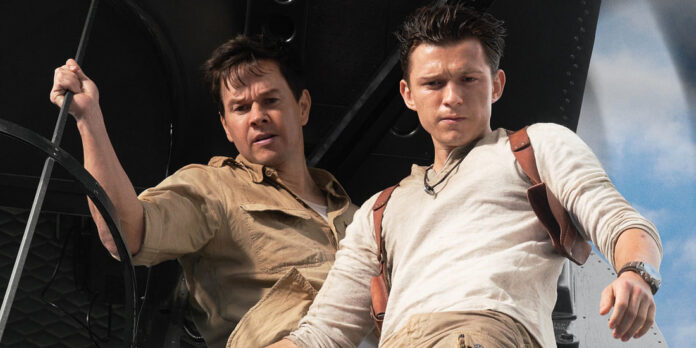 ​After a long pre-production with numerous delays, script re-writes, casting, and director changes, the feature-length adaptation of Sony Playstation’s popular videogame franchise “Uncharted” is finally here. Directed by Ruben Fleischer, who is no stranger to injecting a mainstream blockbuster-style into his films, the origin story of thief and treasure hunter Nathan Drake stays relatively faithful to its source material, supplying an action-adventure that will remind you of classics such as “Indiana Jones,” “National Treasure” and “Pirates Of The Caribbean.” It will also remind you why those films are superior as the mediocre script and uneven casting bog down what should’ve been an emotionally gripping and epic thrill ride.

Nathan Drake (Tom Holland) is a New York City bartender who also happens to be a massive history buff. Fifteen years earlier, his brother Sam (Rudy Pankow) left him behind with a promise to one day return and never did. In comes Victor “Sully” Sullivan (Mark Wahlberg), a seasoned fortune hunter who is searching for a long-lost treasure left behind by Ferdinand Magellan, the first man to circumnavigate the world (Only he didn’t, as Nathan keeps reminding everyone). The treasure would be worth $5 billion; however, it’s not the money that brings Nathan in but rather the promise that he can be reunited with his brother. Nathan and Sully are joined by an associate of Sully’s named Chloe Frazer (Sophia Ali), who holds one of two keys the trio needs to find the treasure. The other key is in the hands of the ruthless and wealthy Santiago Moncada (Antonio Banderas), whose family has been searching for the treasure for generations, and his associate, the equally cunning and dangerous Jo Braddock (Tati Gabrielle). Traveling across the globe, exploring, solving puzzles, and falling at really high altitudes, Nathan goes on an adventure where he’ll constantly be reminded he cannot trust anyone and, in the words of his brother, learn that some things are not gone, but simply lost and thus, they can be found.

“Uncharted” opens with an action sequence that takes place later in the film as Nathan is free-falling through the sky, his leg caught on a piece of cargo flying out of the back of a plane. You’re half expecting the frame to freeze and for Tom Holland’s voice to say, “You’re probably wondering how I ended up here.” Luckily, nothing that cheesy happens in the near two hours we spend with Nathan Drake, but that doesn’t stop the screenplay from being hollow, devoid of originality, and filled with enough plot holes to sink a ship.

Part of the disappointment with “Uncharted” comes back to the casting. Tom Holland is a naturally gifted performer who has amassed a ton of popularity playing Spider-Man in the Marvel Cinematic Universe. The dedication he brings to each of his roles cannot be overstated. We’ve seen him grow up right before our very eyes over the years, and although he’s put on more muscle mass, he still brings the same level of poise and precision he brought to his dancing on “Billy Elliott” all of those years ago. When it comes to the stunts and the choreography, Holland excels. However, this is another case (the last time being “Cherry”) where one can get the sense that Holland is in an awkward phase of his career, too young to be a commanding masculine movie star and too old to be the innocent and naive kid still. Nathan Drake may be older in the videogames, and who knows what that could’ve produced here if the studio had gone a different route. Still, as Nathan, Holland does a commendable job, even if it is awkward having to listen to Wahlberg constantly refer to him as “kid” throughout the movie when his actions and attitude say anything but that.

Mark Wahlberg was at one time set to play Nathan Drake, but this was over a decade ago, and now at fifty years old, he’s almost a convincing Sully, but there’s something inherently missing in Wahlberg’s performance. Whether it’s because he secretly deep down still would’ve liked to have played Nathan Drake, or he’s fed up with the project, his performance comes across as so dispassionate. If anything, by the end of this movie, we’re supposed to get the sense that the bond between Nathan and Sully should be as strong as the bond Nathan had with his brother, but you would never guess based on how Wahlberg plays it. Part of that is a failing on the screenplay. Sully’s introduction to Nathan is incredibly quick and doesn’t effectively take the time to help expand their relationship before they’re onto their first mission together to perform a heist at an auction. Every time it seems like the two men are taking a step forward in the development of their relationship, Sully keeps giving Nathan reasons to distrust him, and their relationship takes two steps back.

Antonio Banderas is barely given anything to do as Santiago Moncada outside of being menacing by deepening his voice to make every line of simple dialogue sound as intimidating as it can be. A subplot involving his father selling their family’s fortune is quickly dispatched with, and just when his character starts to get a little interesting, he too is quickly cast aside in favor of Tati Gabrielle’s Jo Braddock, who, despite her own physical commitment to the role, can’t match Banderas for sheer screen presence.

There are maps, caves, gravity-defying stunts, some really questionable CGI, an uneven cast, and an uninspired screenplay (“Nuns. why does it always gotta be nuns?” is a lame and lazy direct reference to Indiana Jones’ classic “Snakes” quote). It may not be the grand adventure we all wanted, but I can think of several ways how “Uncharted” could’ve been much worse. Tom Holland remains as committed as ever, but even his charm, physicality, and sheer likability can’t elevate this to be one of the great videogames to screen adaptations (a small list already). I guess we’ll have to wait for the inevitable sequel to see if the continuing adventures of Nathan Drake can improve upon what Ruben Fleischer has delivered.