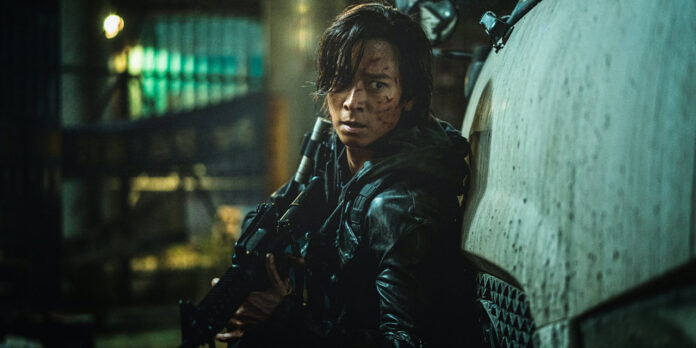 THE STORY – A soldier and his team battle hordes of post-apocalyptic zombies in the wastelands of the Korean Peninsula.​
​
THE CAST – Gang Dong-won, Lee Jung-hyun & Lee Re

Yeon Sang-ho’s “Train to Busan” established itself as one of the strongest additions to the zombie genre, largely by keeping it simple. It took a few likable characters, stuck them in a claustrophobic location, and provided a lean, efficient plot that maintained a constant sense of urgency. And while Yeon’s sequel, “Peninsula,” (or as it’s presented in the U.S., “Train To Busan Presents: Peninsula”) deserves credit for opting not to create a lazy retread of the original film, there’s something to be said for, “If it ain’t broke, don’t fix it.”

The film starts promisingly enough – an infection starts on a boat ferrying refugees away from an infected Korea in a sequence that features the anxiety and pathos the original film had in abundance. But quickly, we are given a (stunningly flat) recap of the four years that have passed, providing the film with a dystopian sci-fi feel, and before we know it, we find ourselves tangled up with Hong Kong-based American crime lords.

Four characters with next to no characterization willingly set foot back in abandoned Korea for purely mercenary reasons and find themselves facing off against human “Mad Max”-esque savages. After an initial chase through abandoned city streets, the film effectively becomes something else entirely: A zombie movie curiously uninterested in zombies.

“Peninsula” boasts a bigger budget this time around, but bigger doesn’t always mean better. By transforming the film into a full-tilt action picture, complete with car chases and cage matches, we get fun action but no reason to care. And with little to no plot to speak of, the film limps from set piece to set piece with no real sense of urgency, which is toxic for a film that is hoping to generate suspense.

Director Yeon Sang-ho has a talent for staging action. A city-spanning car chase is dynamically shot and edited, but the real show stopper, though, is a human-zombie cage match. It’s spectacularly staged and full of chaos and confusion. It could have been genuinely terrifying if we had any reason to care about the characters involved. Despite the thin writing, the film overplays deaths, dialing up the swelling music and reactions to 1000 for characters we don’t know or mind dying.

And yet, despite all of this, “Peninsula” is still better than the majority of zombie films in that it’s technically well crafted and watchable. The action sequences genuinely are impressive. With a better script, the film could have been something special. Instead, it has to settle for being a moderately enjoyable distraction during quarantine.

Powered by JustWatch
Share
Facebook
Twitter
Copy URL
Previous article
The Next Best Picture Podcast: Episode 208 – “Tenet” Reactions & Trailers For “The Batman,” “On The Rocks” & “Death On The Nile”
Next article
“centigrade”