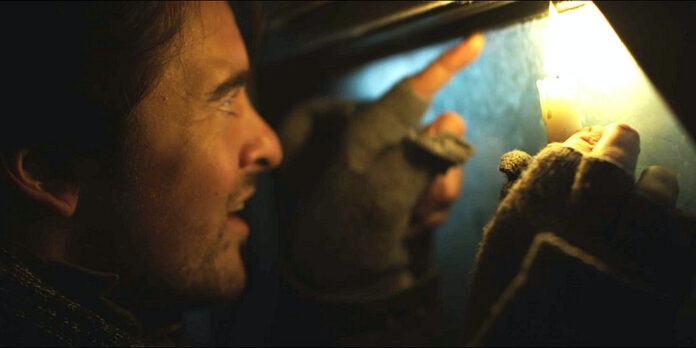 THE STORY – A married couple finds themselves trapped in their car after it’s buried in a blizzard and struggle to survive and maintain sanity.​
​
THE CAST – Genesis Rodriguez & Vincent Piazza

Think of some of the worst scenarios in which you could possibly find yourself. Okay, now combine some of those scenarios into one singular nightmare, and imagine that you’re stuck in it for weeks. That’s essentially what the new thriller “Centigrade” does to its characters. This stressful little movie from director Brendan Walsh puts its two-person ensemble through absolute hell, and we are stuck in their situation with them with little hope for a break. Sure, it may get a bit repetitive after a while, but the moments of total tension are unyielding and appropriately unbearable.

A young American couple, Naomi (Genesis Rodriguez) and Matt (Vincent Piazza), are visiting Norway for Naomi’s book signing. After getting stuck in a blizzard, they decide it’s safer to pull their car over for the night rather than continue driving. Unfortunately, they wake up the next day to find their car completely buried in snow with no way of escaping. Supplies are low, there’s no cell service, and oh, Naomi is extremely pregnant. A battle of patience, ingenuity, and survival plays out through the course of the film, all shot from within the couple’s encased car.

The claustrophobic environment lends itself well to some smart directorial choices. As the characters’ days add up, we see the car and the characters change in appearance realistically. The camerawork is thankfully varied, with many different angles used that wouldn’t be possible to shoot in an actual car. Even though it’s clearly a set, it never seems unrealistic or false. All of this is important in keeping the film from becoming visually repetitive. Adding to the realism of the story is the way the characters react to their situation. When they first become aware of their predicament, they’re panicked before self-soothing by telling themselves that they’ll be fine. They then quickly and begrudgingly accept their fate in a way that feels true to life. There’s no crying hysterics, just pragmatic rationing of their supplies and plan-making.

What does become a bit much, however, is the constant bickering. For a good portion of the film’s first act, the couple argues excessively about their situation. There’s plenty of discussion about who’s to blame and how they should go about attempting to make their escape. It becomes tiring quickly. Not helping matters is the repetitive nature of the story. As their days in their ice-bound prison accumulate, their routines and discussions become fairly monotonous. Perhaps this is to make the audience feel as trapped as the characters, and in that sense, it’s a success, but that doesn’t mean that it’s fun to watch.

A lot is riding on the two actors playing the husband and wife as they are the only actors in the film, and they both deliver. Piazza as Matt is sturdy and reliable in his rationality, making us believe that he’s a grounded and realistically-minded man. Rodriguez’s portrayal of Naomi is appropriately flustered without being pitiable. She’s especially fantastic in the latter parts of the film, where she’s tasked with some challenging emotional moments.

“Centigrade” is a stressful, tense watch that makes you feel as if you’re as trapped as its two characters. It may get somewhat tiresome at times, but overall it admirably uses the abilities of film to transport its audience into the characters’ unfortunate situation.