Trailer – “One Night In Miami…” 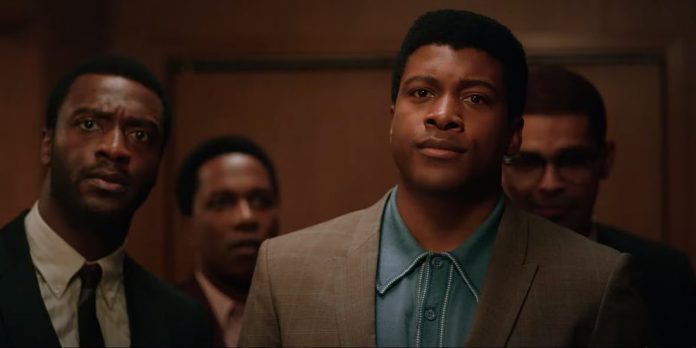 By Matt Neglia
​
Amazon Studios has released the trailer for “One Night In Miami…” starring Kingsley Ben-Adir, Eli Goree, Aldis Hodge & Leslie Odom Jr.. It marks the directorial debut of Oscar winner Regina King (“If Beale Street Could Talk“) and will be released in theaters December 25th, before being released digitally on Prime Video on January 15th 2021.
​
​Click below to see the trailer.

​Plot Synopsis: On the night of Feb. 25, 1964, in Miami, Cassius Clay joins Jim Brown, Sam Cooke and Malcom X, and they discuss the responsibility of being successful black men during the civil rights movement.

What do you all think of the trailer? Having seen the film back at its premiere at TIFF, I can tell you that the four main actors completely inhabit their real-life characters with enthusiasm and complexity. It is so well-staged by Regina King, who really impresses in her directorial debut while the writing by Kemp Powers is some of the best of the year. While people’s opinions vary on which of the four actors is best-in-show, for me it was Kingsley Bed-Adir who managed to make Malcolm X completely his own, even with Denzel Washington’s towering performance of the man in the 1992 Spike Lee film existing as a comparison. This will definitely be an Oscar contender to watch out for this season. Let us know your thoughts in the comments below or on our Twitter account.