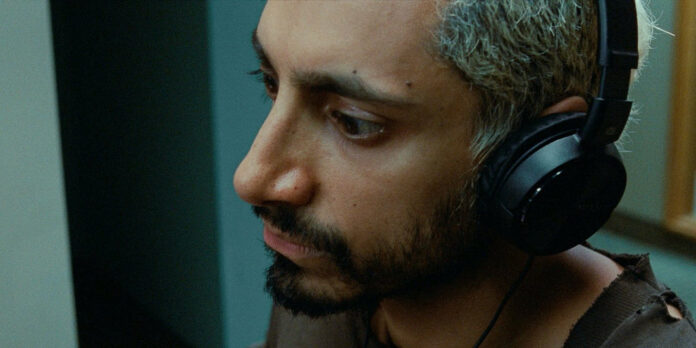 ​​​Director Darius Marder’s “Sound Of Metal” premiered at the 2019 Toronto International Film Festival to strong reviews, especially for its star, Riz Ahmed (“Nightcrawler“). The film has had a long road towards its eventual release, due to strategic timing and the COVID-19 pandemic. But now, over a year later, “Sound Of Metal” is here and now has the benefit of standing out even more in a less crowded year of awards season contenders. Featuring the best feature film performance of Riz Ahmed’s career to date, some awe-inspiring sound work (the title pretty much demands that this area of the film be immaculate) and surprising touches of empathy and subtlety throughout its story, “Sound Of Metal” is a movie that is unlike what you’re expecting but it’s that much better for it.

Ruben Stone (Ahmed) is a drummer in a metal band with his guitarist/singer/girlfriend Lou (Olivia Cooke) called Blackgammon. Their underground, hard-hitting music is not exactly for the mainstream, so Ruben and Lou live in their trailer, traveling across the country, looking for gigs to play in order to stay afloat with hopes that one day their music will catch on. The two have also had their share of ups and downs as Ruben and Lou are both former heroin drug addicts who are supporting each other in their sobriety. However, things take a turn when Ruben starts to lose his hearing and slowly becomes deaf with only 24% of hearing in his left ear and 28% in his right ear. Although he doesn’t want to give up the tour, Ruben’s sponsor puts him in touch with Joe (Paul Raci), a former Vietnam veteran and alcoholic who now leads a deaf community. Although Ruben is looking for a quick solution to his newfound circumstances, Joe tries to help Ruben to accept his situation and be at peace with it.

As the film begins, we hear the sound of guitar feedback that slowly morphs into a high pitched ringing noise, simulating what it must sound like for Ruben, as familiar sounds are lost forever. Every element of the sound work in this movie is top-tier. From the hard and aggressive sound of the concert music that Ruben and Lou play together, to the muffled deterioration of Ruben’s remaining hearing and then to something more distorted and unclear in the film’s extraordinary third act, this is not only some of the best sound work of the year but some of the best you are likely to hear for the rest of the decade.

The movie wouldn’t work without a committed actor at the forefront who could capture our sympathies and Riz Ahmed not only rises to the challenge but he brilliantly underplays the anguish and horror such a drastic change in one’s life can bring emotionally. His performance is grounded, measured and completely believable in every single scene as he takes us on Ruben’s new journey of grief, tackling emotions of denial, anger, bargaining, depression and eventually, acceptance. Ruben needs to learn to be ok with stillness and it’s only through his bond with Lou and newfound friend and mentor Joe that he’s able to find it. A special shoutout must be given to Raci, who is the hearing son of two deaf parents and really did serve two tours in Vietnam as a medic. He perfectly plays the calm community house manager that is guiding lost souls towards newfound purpose and in the case of Ruben, towards redemption. He’s a complete natural and his back and forth scenes with Ruben carry a heavy emotional weight to them that helps the film’s overall mood as it builds towards its serene climax. It’s that emotional support of needing to be saved and saving others that gives “Sound Of Metal” its unexpected power, as Ruben slowly discovers that this isn’t a problem to be fixed – it’s something that needs to be adapted to.

“Sound Of Metal” subverts expectations at every turn to deliver a respectful and patient story that honors the work of the deaf community and gives them a voice in this exceptional movie. Ruben not only spends time with them (many played by real-life members of the deaf community), learning ASL and how to psychologically grapple with his deafness but the movie teaches us to recognize that such a disability is not the end but a new beginning. Director and writer Darius Marder (along with his co-writer Abraham Marder) could’ve taken this story in an exploitive direction, filled with cheap drama and a lack of inclusivity and understanding. Luckily, that’s not the case. Riz Ahmed is as vulnerable as he’s ever been, giving an outstanding performance that should rightfully bring him his first Oscar nomination. The sound work is world-class, delivering a unique auditory experience that is unlike anything else you’ll hear all year. And the supporting work from both Olivia Cooke (although, I do wish she had more screentime) and Paul Rasci help to round things out. You may have heard about “Sound Of Metal” but pretty soon you’ll finally be able to see why this is one of the year’s best.