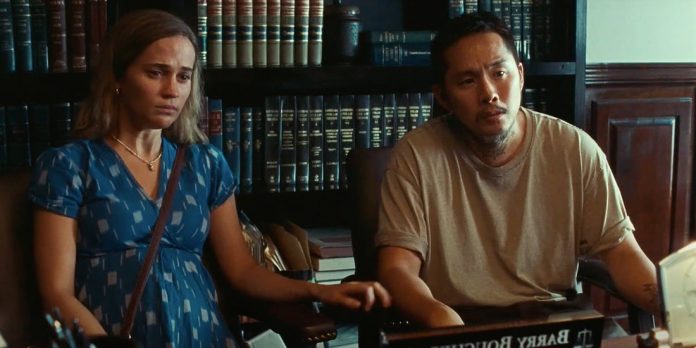 By Matt Neglia
​
Focus Features has released the trailer for “Blue Bayou” starring Justin Chon (who also writes and directs) & Alicia Vikander. The film had its world premiere today at the 2021 Cannes Film Festival and will be released in theaters on September 17th.

Plot Synopsis: An official selection of the 2021 Cannes Film Festival from award-winning writer/director Justin Chon, Blue Bayou is the moving and timely story of a uniquely American family fighting for their future. Antonio LeBlanc (Chon), a Korean adoptee raised in a small town in the Louisiana bayou, is married to the love of his life Kathy (Alicia Vikander) and step-dad to their beloved daughter Jessie. Struggling to make a better life for his family, he must confront the ghosts of his past when he discovers that he could be deported from the only country he has ever called home.

What do you all think of the trailer? This looks like one of the better dramas to come out this year. Based on the early reactions so far out of the festival, that feeling doesn’t seem to be too far off. Justin Chon (whose previous work includes starring in the “Twilight” films and directing “Ms. Purple”) certainly looks like a highlight, as the trailer shows him pouring his heart and soul into every inch of this project, but opposite him, we have Alicia Vikander. The latter is in desperate need of a critical hit after her career has slowed down since winning the Oscar for “The Danish Girl” way back in 2015. She looks excellent here, and I cannot wait to have this film tug on my heartstrings. If it emotionally connects, the same way something like “Minari” did last year, watch out for this come awards season! What do you think though? Let us know your thoughts though in the comments below or on our Twitter account.