“DIE IN A GUNFIGHT” 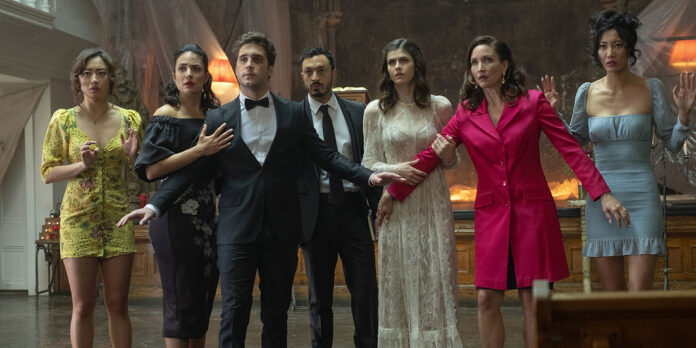 THE STORY – A man and his old flame cross paths with an assortment of schemers and killers.

​​​​​​The story of “Romeo & Juliet” has been told and re-told countless times since the 1500s. Both audiences and artists are continually drawn to those star-crossed lovers and their two families, both alike in dignity and locked in an immortal feud. We’ve seen all manner of film adaptations, from Franco Zefferelli’s classical version to Baz Luhrmann’s wild and crazy modern-dress take to the classic New York musical “West Side Story” (itself being remade this year by none other than Steven Spielberg). There are many different directions an adaptation of the source material can go, so it’s a little surprising that Collin Schiffli’s “Die in a Gunfight” begins as a shockingly straightforward modern update: The Montagues and Capulets are now the Gibbons and the Rathcarts, respectively, and they own rival media companies locked in a centuries-old “blood feud.” Ben Gibbon (Diego Boneta) is a disaffected Millennial who purposely gets into trouble in the hopes of feeling something until he meets Mary Rathcart (Alexandra Daddario), and they fall in love. Her parents ship her off to France before they’re able to run away together, and Ben flees to Mexico in a depression.

This all takes place in an animated sequence at the start of the film, the first sign that Schiffli is going all out with his direction. This just so happens to be the best part of the film, utilizing an arch Billy Crudup voiceover to serve the same purpose as the Prologue in Shakespeare’s play. Romeo’s dissatisfaction with life and Juliet’s lack of autonomy from her parents are seamlessly brought into the 21st century, and the family rivalry is given a clever modern twist. Even Tybalt receives an intriguing reimagining: Now named Terrence Uberahl (Justin Chatwin), he has fallen in love with Mary after being tasked by her father with being her unseen security guard. After that well-imagined set-up, though, it doesn’t take long for everything to fall apart.

The first act of “Die in a Gunfight” veers wildly between different tonal registers, to the point that it’s an open question whether or not Schiffli and writers Andrew Barrer and Gabriel Ferrari are purposely going for camp. The madcap pacing of the opening scenes certainly begs for the kind of over-the-top scenery-chewing that Chatwin and Travis Fimmel (as a loony assassin named Wayne) are engaging in. Still, no one else is entirely at their level, and as soon as Ben and Mary reconnect, the pace and overall tone shift downward and stay there. It’s a pity because the film is such a mess for the first thirty minutes or so that it’s exciting. There is not a single trick in the cinematic book that isn’t thrown at the wall to see what sticks: animation, slow-mo, freeze frames, rewinds, split screens… it’s all here. But as the film goes on, it becomes more and more apparent that these are the signs of a director desperate to enliven a sinking script.

As “Die in a Gunfight” limps towards its woebegone conclusion, nearly everything that was once interesting about it falls away. The slightly droll archness of the first act gets replaced with clunky dialogue, and neither Boneta nor Daddario are strong enough actors to overcome it. The plot also veers ever further away from the source material, up to and including a finale so misguided that it beggars belief. Schiffli tries to the very end, playing with lighting and film effects in an attempt to give the film a boost of energy, but unfortunately, the film is long past the point of no return. The same creativity that was applied to the set-up doesn’t carry over to the rest of the film, stranding the performers and director in a crypt with no way out. Alas! Alack! This could have been a fun update to a classic story, but it ends up a story full of woe, not because of the emotions of the story, but because of the choices made in how this oft-told tale was told.