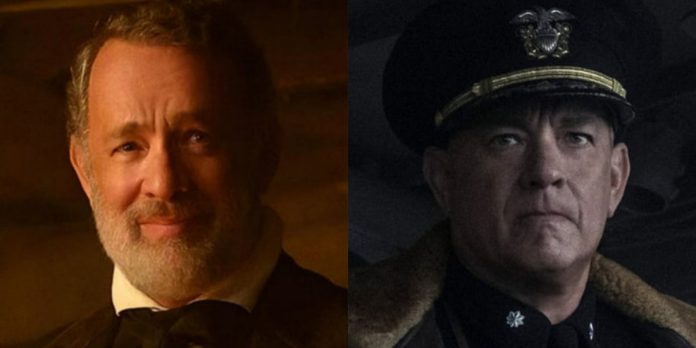 By Michael Schwartz
​
​​Tom Hanks has long been considered one of the most beloved American icons. Right up there with the flag and apple pie, Hanks has carved out a place in history that allows him to be the rare celebrity beloved by just about everyone in these otherwise polarizing times. He is wise. He is comforting. He is America’s dad. As Hanks’ latest film, “News of the World,” is set to open on Christmas Day, it is interesting to look at where both this film and role factor into his place in this tumultuous year.

2020 started off on a high-note for Tom Hanks. In early January, he was the recipient of the honorary Cecil B. DeMille award at the Golden Globe Awards, delivering a speech full of his trademark heart and emotion. Noting how he is made better by the work of his colleagues and co-stars, Hanks held the room in the palm of his hand while expressing gratitude and imparting wisdom. It was the perfect reminder of how beloved this man is in an industry he has been part of for nearly 40 years.

Weeks after his Golden Globes speech, Hanks would find himself an Oscar-nominee for the first time since “Cast Away,” nearly 20 years prior. As a Best Supporting Actor nominee for his work in “A Beautiful Day in the Neighborhood,” Hanks returned to the Oscar scene sitting front and center in the Dolby Theater. His nuanced performance as Fred Rogers earned critical acclaim and was a nice note to bring him back to the awards conversation after a few surprising snubs. An honorary Golden Globe and a long-overdue Oscar nomination seemed to spell out a good year for the nicest man in the industry. However, the universe had other plans in store.

On March 11th, it was revealed that Hanks and his wife, Rita Wilson, had tested positive for COVID-19 while he was filming in Australia. Given that their dual diagnosis came very early on in the pandemic, Hanks and Wilson became the model for how people could potentially expect to respond to the virus. Through their candor and hope, Hanks and Wilson used their experience with COVID-19 as an example, alleviating fear and spreading wise words of wisdom to navigate through the difficult times. Once Hanks and Wilson were able to return stateside and make a full recovery, they donated plasma to be used for vaccine research. By simply being honest and upfront, the couple was able to act as examples in a time where thousands were falling ill to a strange virus. Not long after, Hanks would go on to host “Saturday Night Live” from his living room. While he didn’t participate in any sketches, just his mere presence alone was comforting and inspiring to see. Not knowing what was to come, the sense of familiarity was a beautiful sight in such trying times.

After his bout with COVID-19, summer saw Hanks return to the big screen, so to speak, for the first time since 2019. A far cry from Mister Rogers, “Greyhound” found Hanks writing and starring as Commander Ernest Krause, the officer of the USS Keeling, an Allied convoy being attacked by German submarines. The film was a technical exercise that found Hanks back in his straightforward style. The Apple TV+ release would go onto be one of the more notable streaming titles of the summer and continues to remain in the Oscar conversation through the nearly re-named Best Sound category.

But the big Tom Hanks film of the season, likeliest to make a dent in the awards conversation, is Paul Greengrass’ “News of the World.” The film finds Hanks in an atypical setting and genre: the wild west. The western is not exactly the environment we expect to see the everyman actor in. Yet, what makes the performance work is that Hanks gets to serve as the protective parental figure we root for and want to see save the day with his kindness. As Captain Jefferson Kyle Kidd, Hanks is a widowed Civil War veteran who travels the country delivering news of the world to live audiences, county to county. When Kidd finds himself tasked with returning a kidnapped girl back to her family, he becomes the heart and soul of the film. Seeing Hanks in this light as a guardian of sorts calls to mind previous roles where his presence as an ordinary man in extraordinary circumstances makes all the difference.

​From “Philadelphia” and “Forrest Gump” to “Bridge of Spies” and “Sully,” we’ve seen Hanks work in this style before. But in a new environment and after the year we’ve just been through, it reinforces what we have come to love about the man. His reliability and everyman charms make him someone we feel as if we can trust. At a time where it seems as if the world as we know is in a state of flux, watching a familiar Hanks performance can be the perfect balm. And following his Oscar comeback from last season, his strong work in “News of the World” may very well find him back in the mix again.

Have you seen “News of the World” yet? If so, what did you think? Let us know in the comments section below or on our Twitter account.