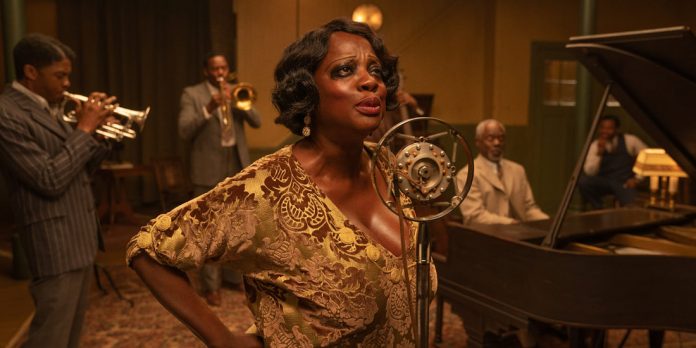 Two weeks ago, I went through the Next Best Picture team’s below-the-line Oscar predictions and averaged them together to see what our consensus predictions looked like. I’ll once again be taking a look at the below-the-line categories outside of the above-the-line categories, which Matt covered last week. Now that critics groups have begun handing out their end-of-year awards, let’s take a look at our current collective predictions and see what’s up, what’s down, and what’s stayed the same in the past two weeks.

Dropped Out: The Trial of the Chicago 7

Our top three contenders are holding firm, with the acclaimed camerawork of “Mank” and “Nomadland” in a tight race for the top slot, closely followed by overall craft contender “News of the World.” “Ma Rainey’s Black Bottom” jumped an impressive three slots after its lauded Netflix debut. This rise is contrasted by the fall of another Netflix contender, “The Midnight Sky,” which received mixed notices since its critical embargo was lifted. “Minari” is a new addition to this lineup after kicking out the previous tenth spot holder, “The Trial of the Chicago 7.” “Mank” and “Nomadland” should be secure in their peak positions for practically the entire season, unless an unknown contender like “Judas and the Black Messiah” impresses voters.

Somewhat surprisingly, our predictions for Best Costume Design have not changed at all in the past two weeks. The subsequent premiere of “Ma Rainey’s Black Bottom” only seemed to solidify its firm grasp on the top spot, with “Mank” not far behind. The yet-unseen “The United States vs. Billie Holiday” stands the best chance at breaking into the top five with its sure-to-be lavish period costumes.

“The Trial of the Chicago 7” maintains its top position in this craft category that is almost always tied to Best Picture. The only major changes here are “Ma Rainey’s Black Bottom” and “The Father” trading their spots in the top five. “News of the World” and “Tenet” also had a switcheroo, with “Tenet” hoping for a nomination based on its flashy editing, despite not being a likely Best Picture nominee. Non-Best Picture contenders do occasionally pop up in this category (“I, Tonya,” “Baby Driver” & “Star Wars: The Force Awakens“), but in the expanded era, it’s less likely.

After its Netflix debut, “Ma Rainey’s Black Bottom” maintains its hold on this category on the strength of its leading lady’s impressive transformation. The biggest advance for a film in this category was “Pinocchio,” with its flashy makeup work. It would appear that the fifth slot is a battleground in this category, with “Birds of Prey, “Pinocchio” and “The United States vs. Billie Holiday” all vying for the spot.

This category has seen a major overhaul since our last assessment. The period designs of “Mulan” and “Emma.” are surging, along with the general crafts contender “News of the World.” “Ma Rainey’s Black Bottom” and “The Midnight Sky” saw the most severe drop in predictions. For the latter, it’s almost certainly because of its mixed reception, which has made it a less competitive player in most categories.

Our top three remains steady. “Sound of Metal,” “Mank” and “Tenet” are all obvious examples of sound work in three vastly different ways, which makes them clear contenders for Best Sound. As in many categories, the recent release of “Ma Rainey’s Black Bottom” helped it to rise. Our newest contender here is “The Trial of the Chicago 7,” which just barely edged “Wonder Woman 1984” out of the rankings. Even though it will surely have impressive sound work, the lack of nominations for the first “Wonder Woman” could be a warning for its sequel’s Oscar potential.

This category has a good amount of movement, most impressively from “Sonic the Hedgehog,” which leaped into the top five. Despite receiving a fairly mixed response, “The Midnight Sky” didn’t show any movement, but it almost certainly helped solidify “Tenet’s” lead. That should seemingly only continue to grow, and it wouldn’t be terribly surprising if this becomes one of the clearest categories to predict on Oscar night.

Just like with Best Costume Design, this category saw no changes in our prediction consensus. Trent Reznor and Atticus Ross can feel fairly assured that they should have no trouble scoring two nominations in this category, and very likely their second win as a duo.

Dropped Out: Wolfwalkers – “Running With The Wolves” (ineligible)

Our top two contenders are still holding firm. Leslie Odom Jr. is hoping for a double nomination year in this category for “Speak Now” and in Best Supporting Actor, and Diane Warren looks to break her losing streak with her first potential win after 11 previous losses. Taylor Swift’s song for “Miss Americana” broke into the top five; she has previously had several songs in contention (she has three Best Original Song nominations from the Golden Globes), but this would be her first Oscar nomination.

You can find our team’s detailed predictions organized by category here. While there is still plenty of time before the Oscars, the race has undoubtedly begun. Keep an eye on our predictions as we chart which films are up and which are down across this long and winding awards season. Let us know your thoughts in the comments section below or on our Twitter account.