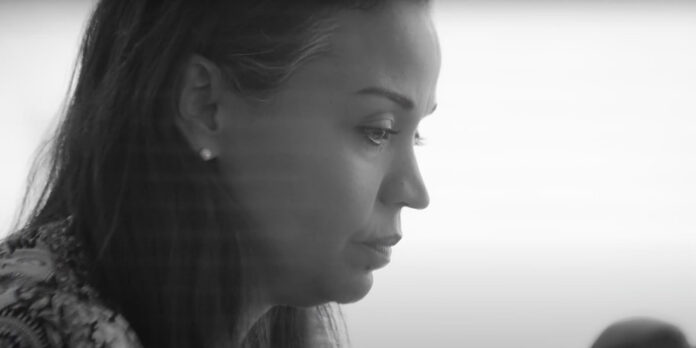 THE STORY – Indomitable matriarch Fox Rich strives to raise her six sons and keep her family together as she fights for her husband’s release from a 60-year jail sentence.​
​
THE CAST – Fox Rich & Rob Rich

The power of documentary filmmaking comes from its ability to effortlessly put the audience in the shoes of its subject. This can be achieved by archival footage, interviews, or any number of other methods. The best documentaries can also achieve this by just living in the world of its subject and simply letting their words and experiences speak for themselves. This is precisely the magic trick achieved by “Time,” the moving and rousing documentary from director Garrett Bradley.

The film chronicles Fox Rich, an entrepreneur, and mother of six boys who has spent two decades fighting for her husband Rob to be released from prison. In a moment of financial desperation in the mid-90s, the couple committed a robbery that led to Fox serving three and a half years and Rob sentenced to 60. Across the course of the film, we see her make endless phone calls and file appeals in her husband’s name, along with footage of her success as a lecturer and businesswoman. These modern-day video diaries are intertwined with archival footage she has recorded over the years of her boys growing up. The film weaves a tapestry of melding times, where the past informs the present and the present explains the past, and the search for justice is a continuing fight across both eras.

The film’s method of using selective video footage brings the audience fully into Fox’s world without editorializing. The audience is allowed to merely watch Fox’s daily life and ceaseless fight for her husband’s freedom. This hands-off approach forces the audience to face the objectivity of the injustice against which she is pushing back. The film presents impactful moments without comment, from which the audience derives further meaning. For example, in one scene Fox is seen speaking to her church congregation. She asks forgiveness of them for what she did that put her in jail, thus showing rather than putting to words the hypocrisy of a country that purports to follow a Judeo-Christian doctrine but doesn’t value the Christian idea of forgiveness.

The footage itself is contemplative and mesmerizing. It’s beautifully edited together and it’s all presented in gorgeous black-and-white. This smartly eliminates any glaring aesthetic differences between videos shot on devices of varying quality and technological advancement. This monochromatic choice also blends together the past and the present via visual uniformity, solidifying the film’s themes of the subjectivity of time.

The subject at the center of any documentary is of the utmost importance when it comes to selling the purpose and perspective of the movie. Luckily for “Time,” Fox Rich is a naturally engrossing and effortlessly captivating figure. Even just watching her go about her daily life and casually interacting with her boys is interesting because of her natural magnetism. But where the film really captures her well is in the moments that relate to her fight against the carceral state. She is composed and graceful during her endless phone calls with those with judicial power, but in one scene we are finally allowed to view her righteous and understandable anger at the slowness and impersonality of the justice system. It is a wave of understandable anger, and it is all the more powerful in contrast with her otherwise patient behavior.

“Time” is a documentary that does what few films of any kind can do: it easily gets the audience to sympathize with and completely understand the struggles of a stranger. It is a powerful and emotional call for fairness and equality.