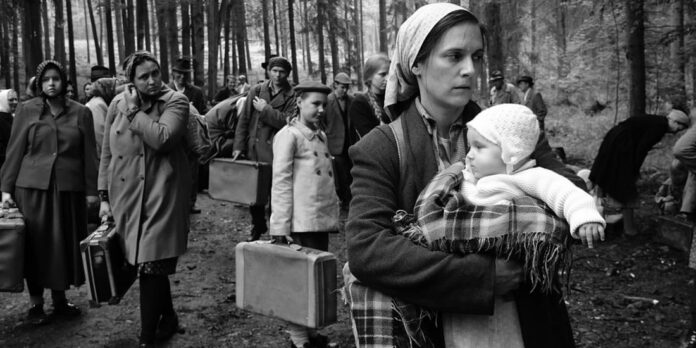 THE STORY – How to reconcile with killings committed by your own neighbors? How to face growing evil that nobody stands against? What can human will overcome and what is the value of humility and hope?
​
THE CAST – Magdaléna Borová, Stanislav Majer & Csongor Kassai

10/7/2020
​By James Palmer
​
Opening to a wide landscape, filled with fog and distant sounds, “Shadow Country” establishes a clear tone and sticks to it throughout its 135 minutes. Tins cans are heard as wind chimes, animals call from afar and the repeating sound of wind and drums acts as a score within the silence. Directed by Czech Bohdan Sláma, “Shadow Country” is not a story about anyone in particular but an ensemble of characters having to embrace the full spectrum of human behavior, kindness and most of all cruelness.

During the opening text, the question is asked “Who are we and where do we belong?”, a question that most of the townspeople may ask themselves as we see their lives alter throughout the 30s and 40s of a war town Czechoslovakia. The emphasis is predominantly on the Nazi’s occupation of this territory and how their morals (or thereby lack of) affect the townspeople, not just through cruelty and torture but through manipulation of a certain population. “Shadow Country’s” main conflict is through the variety of characters in this town – tension spreads throughout and creates a great divide between each individual character. It’s hard to empathize with anyone specifically when characters are as important as each other. This is definitely more of a performative piece than a narrative one – it feels like someone trying to say something rather than actually saying it. Although there is authenticity with the location and production design, there is something inescapable about “Shadow Country” that makes it feel like live theatre instead of a historical display of humility.

Whilst the emotive care for it is lacking, the sense of style is as clear as anything in Sláma’s historical drama. A score is not used for emotion bar a few scenes, instead choosing to let the ambiance dictate the scene. Sounds like sewing machines and carriages feel mechanical and provide a real grit to this town. Shot in black and white, the film can feel like machinery with how it delivers on a technical aspect but falls short on the emotion. Sláma’s “Shadow Country” is mostly long takes that wander through characters or the streets. We see multiple conversations taking place within the same shot and go where the characters go – there are little to no jump cuts except for the very obvious title cards indicating a new year. The film is mostly scenes for each year as tensions escalate during the Nazi’s occupation and reach a boiling point during the aftermath of World War II.

The inspiration for Sláma is very obviously in previous European films of the 60s and 70s that looked into a case study of humanity rather than an individual. Bergman’s work feels evident in the long shots and camera placement and whilst at times provides engaging cinematography, its cleanness seems to make the grit of everything else feel fake. This hazy atmosphere would have felt a lot more succinct if it was shot like these European films of the past on celluloid.

It’s hard to point out a specific moment that encapsulates the film or sticks with the audience long after its ending. The young men of the town being sent off to war feels like the point of no return in the film and from here is where the tone and story meet the atmosphere in this grey point of morality that Sláma is trying to convey. The film may not ask the questions that it stated at the beginning but does a good job in detailing the selfishness of human behavior and how when given the chance to be on top, humans milk it for as long as possible, regardless of how it may affect others. Whilst this could be a poignant message to apply to the 1% of today, “Shadow Country” doesn’t feel like a film trying to relate itself to anything happening currently but instead recognizing how human behavior has stayed throughout history and how it can affect a small town during one of the most horrid periods In history for central Europe.

“Shadow Country” is an endless cycle of anger, highlighting how this affects different people in different scenarios. From the rich to the poor, from youth to the old, it all affects us in one way, revealing what’s underneath the surface when humans are placed in situations of evil.