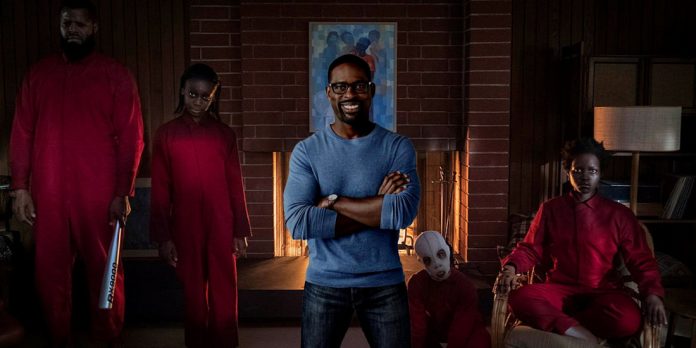 ​Jordan Peele has had little to say about what the more detailed elements of his recent film “Us” were intended to say as far as social commentary is concerned. We know there is an episode of “The Twilight Zone” that influenced some of the storytelling but for a film full of nuance, there are many questions about what is coincidence and what his ultimate intentions were with his latest horror film.

​Theories have abounded about the overall message of “Us.” Is it intended to speak to the current political climate, continued suppression and marginalization of much of the country?  There is speculation that it is a reminder that even God can’t save us now (see Jeremiah 11:11). In a recent Essence interview, Peele was quoted as saying, “This movie is about all that we tuck down into the recesses of our society and fail to acknowledge; all of those that suffer on the other side of the privileges we have.” He does go on to reference the prison industrial system as one of the manifestations of this truth.

I had this vision after viewing the film of Jordan Peele seated on his couch at home, along with the other 13 Million Americans, watching the widely popular and acclaimed NBC television family drama “This Is Us”.

Originally airing in September of 2016, this Emmy Award-winning, Superbowl-following series has made a place for itself within the zeitgeist, with a very presumptuous title. This is us? I would like to argue that “This Is Us” is not us. I could not help but extend my daydream to wonder if Jordan Peele just might feel the same way.

If “This is Us” is not us, then maybe…just maybe “Us” is us. A story about what it means to be raised in privilege and what we suppress and repress in order to validate as the current truth. This is not a new story, but it continues to be an evolving one as we unpack what it means to be an American in 2019. We can tell ourselves that things are better and we think progressively, but then we flock to a show like “This is Us.” Hailed for being groundbreaking because it tells the story of three siblings, a brother, and sister of blood, and an adopted sibling of color (played by Sterling K. Brown). It’s a perfectly fine show with some great messages, yes, but certainly still a skewed representation of who we are today, or “us,” in my opinion.

There is something intriguing to think of the film “Us” as a response to this current piece of pop culture. The layers of the main character’s Adelaide and Red (played by Lupita Nyong’o) certainly speak to an acknowledgment of origin and the influence of privilege on the construct of identity. I am not one who keeps up on the current developments of “This Is Us” (watched the first season only) but I have been told that there is even a ballerina storyline on the show in a later season. Coincidence? Most likely. But, Adelaide does mention coincidence as her omen for bad things to come and she turns out to be right. Considering the incredible relevance of the connection of dance and privilege on display in “Us” it is at least worth considering that these two forms of entertainment are connected? If not, I feel like I would be gaslighting my own intuition and besides, isn’t this just exactly what Jordan Peele wanted when he made the decision to not reveal the secrets surrounding “Us?” Multiple levels of interpretation, wild connections, and theories which will give his latest film an enduring legacy of debate and wonderous entertainment.

In 1986, 6.5 Million people joined the hands to fight hunger in “Hands Across America.” That is one-half of the viewership of the television show “This Is Us”. In “Us,” Jordan Peele subverts this ostensibly healing event to reveal a darker side of how sometimes even good intentions can be damaging in ways we can’t see or understand. When I see a widely embraced “version” of certain creators’ interpretation of “representation” I think it is fair to argue there is a similar danger to consider. It may not come up from the ground and kill us with scissors, but it might need a reckoning sooner than we care to acknowledge.

Have you seen “Us” yet? Do you have any theories or connections you want to share with us about the movie? Let us know in the comments section below or on our Twitter account.