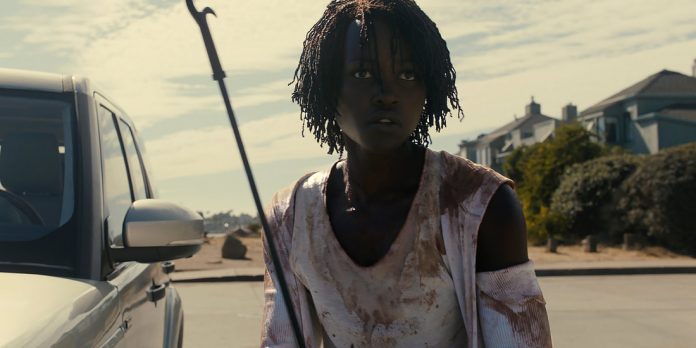 ​I’m about to suggest something a few weeks ago I was dismissing right and left: Lupita Nyong’o could earn a Best Actress nomination for “Us.” As a disclaimer, I’m writing this piece before seeing “Us,” as to not bias myself and instincts based on an objective case that can be made for Nyong’o’s Best Actress chances. I’m writing this purely because I see potential in a possible staying power with this performance.

​
​1. “Us” Is The Successor To “Get Out”
Jordan Peele lit the world on fire and defied every awards season precedent with his revolutionary commentary on race in America two years ago. He betrayed common logic of preferable release dates and overcame genre bias with “Get Out,” which earned four Oscar nominations and won Best Original Screenplay. Peele’s sophomore outing in “Us” has been met with great reviews, most reactions praising his increased ambition and technical improvements as a director. “Us” is already another box office smash for Peele (the film grossed $70 million over its first weekend), and if a relatively unknown actor like Daniel Kaluuya can earn a Best Actor nomination for “Get Out,” why can’t the Nyong’o use her bigger profile and arresting role(s) to earn one for Best Actress?

2. Toni Collette Put Up A Good Fight Last Year
This past year, Toni Collette’s performance in “Hereditary” started something of an Internet sensation. It was a triumphant portrayal that just happened to be in a genre-heavy horror movie. While Collette wasn’t able to break into the big awards (Oscar, Golden Globe, SAG), the Internet cheered her on and kept her in the conversation; she won the Gotham award for Best Actress; and she became something of a critics’ darling with regional awards and was nominated for Critics Choice. I would argue she made ample progress in making people more comfortable with considering performances in the horror genre for awards. Remember: all of Collette’s success was accomplished without a proper awards campaign for “Hereditary” from A24. “Hereditary” also lacked the star appeal of Jordan Peele and the buckets of cash “Us” will continue to bring in. It’s my contention that Nyong’o could benefit from the inroad Collette made last year. At the very least, I could see her showing up in many critics’ awards, like Collette.

3. She’s A Previous Winner Finally With A Role Worthy Of Her
The critical reviews for Nyong’o’s performance have vastly exceeded my expectations. Not only has she been showered with acclaim for her work, but most reviews have gone into extensive detail about just how complex her job as an actress was in “Us.” She has merit on her side, there’s no doubt about that. But what’s key for her is the fact that she’s already an Oscar winner, and she hasn’t had a role worthy of that title since “12 Years A Slave,” itself. There were revelations disclosed during the #MeToo developments last year, about Harvey Weinstein attempting to derail her career. She’s someone voters want to root for, a facet of her public persona she used to enchant everyone when she won Best Supporting Actress.

4. #OscarsSoWhite Still Prevails In Best Actress
Of the four acting categories, Best Actress is the one that lacks the most in racial representation in recent years. (This is mostly due to the fact that leading roles for women of color have been scarce for a long time. Thankfully, this is changing in the industry for the better, with more opportunities). Even though #OscarsSoWhite has been avoided for the past three years, representation is going to continue to be expected and expanded. Only three Black women have been nominated for Best Actress this decade — Viola Davis, Quvenzhane Wallis, and Ruth Negga. Along with Cynthia Erivo, who is also playing Harriet Tubman in “Harriet” later this year and has the potential to be a huge contender, Nyong’o, already an Oscar winner in a powerhouse performance, would create a viable option for there to be one or even two Black actresses to be nominated in the Best Actress category. It would be historic if Erivo and Nyong’o both made the cut since the last time it happened was 1972 with Cicely Tyson and Diana Ross.

This is a strong case to be cognizant of Nyong’o over the next year of Oscar predicting. However, some have pointed out how buzz for her dual-role performance may not be strong enough to surpass the hurdles: “Us” is already more divisive than “Get Out” ever was; the Academy proved they weren’t ready for an iron-clad performance in a horror movie last year with Toni Collette in “Hereditary;” and while “Black Panther” and “Get Out” maintained buzz from February through the following awards season, it’s not particularly common.

But just remember, I was someone stunned by how far “Get Out” went. Combine the woke power of Jordan Peele’s racial commentary with a sensation of a leading woman character, stranger things have happened. Right now, the momentum is with Nyong’o.

What do you think? have you seen “Us” yet? What do you think Lupita Nyongo’s chances are at getting a Best Actress nomination? Let us know your thoughts in the comments section below or on our Twitter account.

Share
Facebook
Twitter
Copy URL
Previous article
The Next Best Picture Podcast: Episode 135 – Oscar 2020 Preview, Disney/Fox & The Trailer For “Once Upon A Time In Hollywood”
Next article
This Is…Us?