“THEY SHALL NOT GROW OLD” 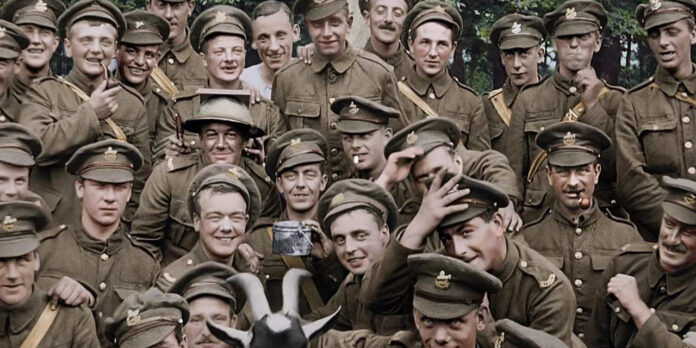 THE STORY – Using state-of-the-art technology and materials from the BBC and Imperial War Museum, filmmaker Peter Jackson allows the story of World War I to be told by the men who were there. Life on the front is explored through the voices of the soldiers, who discuss their feelings about the conflict, the food they ate, the friends they made and their dreams of the future.

THE CAST – World War I Veterans

​​​​On November 11th 1918, an armistice was called and The Great War which had raged for four years and taken millions of lives was finally over. Now, 100 years later, the British Imperial War Museum commissioned Peter Jackson to create a movie using only what was filmed at the time. In true Jackson form, he delivered a technological marvel that restored the original material to near pristine condition, colorized it, and then took it a step further and made it 3D. He combined that footage with the audio from interviews with men who fought in the war to tell the story of what life was like for the average infantry soldier in the British Army. The film weaves these two artifacts of a bygone era together, along with some additional materials, into a fascinating documentary that will appeal the most to those who are already interested in the topic of World War I.

“They Shall Not Grow Old” opens with an introduction by Peter Jackson giving a brief description of how the film came to be before opening on a long panning shot of London in 1914. There is a clarity and depth to this shot that looks antique. In contrast to how such old film footage usually looks, it feels so modern. The voices of old men narrate their own experiences and the footage that plays in the background seems to illustrate them. It becomes clear that many of the soldiers that went to fight were as young as 16 or 17. They joined up in the heat of the moment as the war began, all of them hoping for excitement and a chance to prove themselves. We see their training, being called to war, what their lives were like in the trenches and far behind the lines. Jackson takes us through a shortened version of the war, but all from the perspective of a man on the ground.

The limitations of the film become apparent as the documentary approaches describing what it was like to go ‘over the top’, meaning climbing up the trench wall and running across the empty no man’s land that separated the two front lines to make a direct attack. Cameras at the time were hand cranked and not exactly up to handheld usage, so once the men are over the wall there is nothing to show what it was like. Jackson chose to mostly use antique magazine illustrations (also of that period) as the visuals for that part of the film. While it works well to convey what happened in those awful moments, it loses some of its immediacy. Despite the lack of combat footage, “They Shall Not Grow Old” doesn’t shy away from showing the horrors of war and despite the high level of violence on screens today, the difference between pretending dead bodies and the reality of what death looks like is stark and affecting.

As soon as the film starts, it is clear that something near miraculous has been done to the original footage that Peter Jackson started with. There is none of the jittery speed, scratched film, or flecks onscreen, instead, it looks like a regular movie. It is certainly the best use I have ever seen of 3D, every scene with original footage pops off the screen. It adds a layer of realism that is breathtaking when applied to things like mines exploding or artillery weapons being fired. Despite the excellent job of recovering the film, it is still 100 years old and the touch-ups on the more destroyed parts of the film sometimes give the images a ghostly effect, which is all too appropriate for the documentaries subject matter. It is only somewhat noticeable on the big screen, so it will probably not be as obvious on a TV, which is where most people will see this film.

Despite the amazing reconstruction of the footage and important subject matter, “They Shall Not Grow Old” will not appeal to everyone or even a wide variety of people. It has a narrow focus that doesn’t allow for exploration of the wider history of the war or much at all beyond the infantryman’s experience. It does its best with impressive foley work and some cleverly constructed sound design that gives voice to the men on screen, but because there is no central story or narrator to guide the experience, it sometimes feels aimless. If you have an interest in The Great War or would like to see the magic that Peter Jackson and his small crew worked with film stock that has existed for more than a century, “They Shall Not Grow Old” is well worth seeking out.