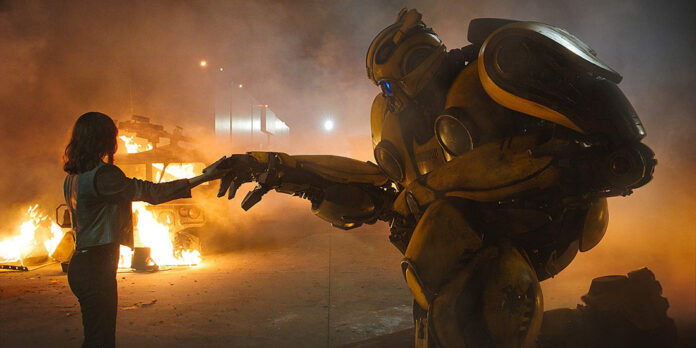 THE STORY – On the run in the year 1987, Bumblebee the Autobot seeks refuge in a junkyard in a small California beach town. Charlie, on the brink of turning 18 years old and trying to find her place in the world, soon discovers the battle-scarred and broken Bumblebee. When Charlie revives him, she quickly learns that this is no ordinary yellow Volkswagen.
​
THE CAST – Hailee Steinfeld, John Cena, Jorge Lendeborg Jr., John Ortiz, Jason Drucker & Pamela Adlon

​​​​​Five films. Five. Honestly, whether you like the first film in Michael Bay’s “Transformers” series or not, we can all agree that the franchise under his direction had run its course a long time ago and had by now, completely gone off the rails to the point that even yours truly stopped watching them after the third film. Now, we have a new “Transformers” film which also happens to be a prequel. Michael Bay is no longer directing and in his place is “Kubo And The Two Strings” director Travis Knight. We have a female screenwriter with Christina Hodson (“Shut In” & “Unforgettable”). And everything else you can think of that was terrible about the Bay-directed “Transformers” films has been stripped away, thus making “Bumblebee” a living piece of proof that having the right creative team behind a project is everything to creating a good movie.

It’s 1987, 20 years before the events of the first “Transformers” film. The Autobot known as Bumblebee (Voice of Dylan O’Brien) has been sent to Earth by Optimus Prime (A returning Peter Cullen in a reduced role) to seek refuge from the Decepticons and await further instructions on the Autobots’ next move for survival. After a misunderstanding with Sector 7 agent Jack Burns (John Cena), who is unaware of the large transformers’ allegiance, Bumblebee turns himself into a yellow Volkswagen and hides out in a California beach town junkyard. One day, he is discovered by Charlie Watson (Hailee Steinfeld), a misunderstood teenage girl who is trying to make sense of everything in her life after the passing of her father. Caught up in circumstances beyond her imagination, Charlie realizes that her new car is the Earth’s final hope for survival when the Decepticons arrive, seeking to destroy the good-hearted yellow Autobot.

Let’s first take a moment to examine why the “Transformers” films failed after the first effort from Michael Bay. An over-reliance on CGI and an overall lack of focus on character and story was probably the biggest reason why audiences grew tired of Bay’s films. With “Bumblebee,” the budget is considerably less than what Michael Bay was working with and the battles are more intimate as we follow only one hero instead of an entire group of them battling the Decepticons. There are no “the world is going to end” level stakes. Instead, “Bumblebee” dials everything back a notch including the scale, the effects, the sophomoric humor, the runtime and brings us back to the one thing that made the first film so relatable: the story of our lead character and their car.

Replacing the typical male protagonist with a female one gives “Bumblebee” a new perspective and makes it feel all the more fresh and alive. It’s amazing how much Travis Knight and Christina Hodson get right with this new film in the franchise. Whether it serves as a re-boot for other sequels leading up to the eventual 2007 Sam Witwicky timeline or not is irrelevant. What matters is how “Bumblebee” proves that you can take a stale property and reinvigorate it with the right people behind and in front of the camera. Which leads us to the wonderfully talented Hailee Steinfeld who continues to astound us with her range, charisma, and confidence on screen no matter what kind of role she is playing. Knight and Hodson keep the emotional core of the story centered on Charlie and her relationship with Bumblebee as she tries to cope with the passing of her father. If you never thought the “Transformers” films could make you cry, Knight, Hodson, and Steinfeld are here to push the boundaries and squash expectations.

For everything “Bumblebee” gets right in attempting to course correct the “Transformers” franchise, there are still a few nitpicky aspects which keep this perfectly enjoyable family film from being a full recommendation. The human characters, outside of Charlie, maintain their stupidity from the Bay films in dealing with the clearly evil Decepticons. You cannot possibly convince me that top-tier government officials are going to be so gullible and blind to the evil threat these dark, sharp, large machines clearly impose. Now, I understand that the shift in tone for “Bumblebee” has gone from senseless teenage action to a more family-friendly storyline, one that resembles live action PG family films from the ’90s. However, every goofy, nonsensical moment of dialogue or action from the characters in this movie (especially a distractingly miscast John Cena who is too serious for this movie) feels forced, inauthentic and pulled me out of the more heartwarming and engaging aspects of the story involving Charlie and Bumblebee.

“Bumblebee” might go down as one of the most underrated films of 2018 and one of the most satisfying, considering what came before it. It’s almost impossible to imagine that the “Transformers” series could ever fall back into our good graces again after years of disappointments but here we are. It’s rare to see a studio actually listen to its audience and try something new. Bring in only one writer to write the screenplay. Bring in a director with a vision which highlights character and story. Change the perspective and keep the stakes minimal. Make the runtime shorter. Add in a nostalgic soundtrack with fun hits to keep the mood levels high. Sprinkle in a warm and emotional center and you get “Bumblebee.” Yes, some awkward moments of dialogue and humor still managed to find their way into the final product but this is one transformer movie that has transformed itself enough to warrant the trip to the theater over the holidays with the whole family.