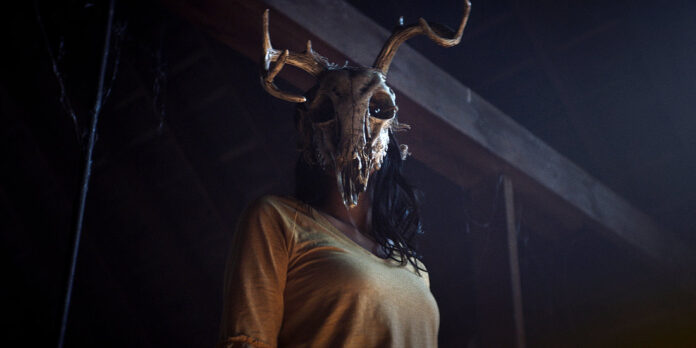 THE STORY – A defiant teenage boy, struggling with his parent’s imminent divorce, faces off with an old witch who has possessed the neighbor next door.

In a well-crafted opening prologue, set to an ominous ‘80s electronic track, we see distinct items from the decade scattered across the ground. A Rubik’s cube, cassette player, Etch A Sketch, and more are pelted with rain in slow motion. We’re made to believe that “The Wretched” will be yet another “Stranger Things” horror rip-off. Instead, writer-directors Brett and Drew Pierce give us a classic setup, complete with a babysitter who stumbles across a terrifying creature only to flash forward to the present, leaving the nostalgia and synthwave in the prologue where they belong. Don’t get me wrong, “The Wretched” still feels like a throwback, from the setup, the setting, and the big bad monster itself.

The entire premise will sound overly familiar. After getting in some trouble at home, seventeen-year-old Ben (John-Paul Howard) is sent to live with his dad (Jamison Jones) for the summer to work at the lakeside marina. Settling into his new town comes with the standards: spoiled rich bullies, hotties he can’t get, and drunken parties in the woods. Soon, Ben befriends his coworker Mallory (Piper Curda), who helps things start to feel a bit more comfortable. That is, of course, until Ben starts hearing creepy noises on his roof at night.

The audience is already more or less clued into the danger lurking around Ben’s home, as we see a creature emerge from the woods and focus its attention on the next-door neighbors (Zarah Mahler and Blane Crockarell). This boney, human-like thing almost seems to be a part of the forest, a woodland demon that sounds of branches creaking and snapping as it moves. Practical effects work well to bring the creature to life, like when it emerges from the carcass of a dead buck. It feels present in each scene, never artificial, contorting, and bending as it moves to take over a new life.

Initially, Ben simply hears something hair-raising, but soon, he catches up to what the audience already knows: something isn’t right with his neighbor, Abbie (Mahler). He begins spying on the neighbors to find out what’s going on. While not much of this plot is groundbreaking, or even surprising, the tone and brisk pace keep things interesting. The Pierce Brothers wisely don’t dwell on the details or else it would be all too easy to get bogged down in leaps of logic. A solid blend of just-enough story, paired with unsettling frights, keeps the hooks in. The mood is just right as well, equal parts “Jaws,” “Lost Boys,” “Rear Window,” and “It”.

Thanks to some help from Witchipedia (which apparently exists), Ben determines that the creature taking over his neighbors is, yes, a witch. He sets out to defeat the witch and stop her from taking over anyone else. The film becomes a classic “teen versus monster” horror movie, but it feels like a fresh new entry. Ben enlists Mallory to help before it’s too late, and they journey into the forest to cut off the creature at its home base.

There’s so much promise within “The Wretched”. While none of the cast is a household name (nor even vaguely familiar), they hold their own. Howard and Curda play well off of each other, while Mahler gets plenty of time to shine in both human and creepy demon mode. Of course, the Pierce Brothers show the most promise, delivering an economical and effectively eerie film. It never overstays its welcome, holding some unexpected moments up to the very last shot. Though the nondescript title “The Wretched” doesn’t do the film any favors, it’s a solid horror flick for the summer.