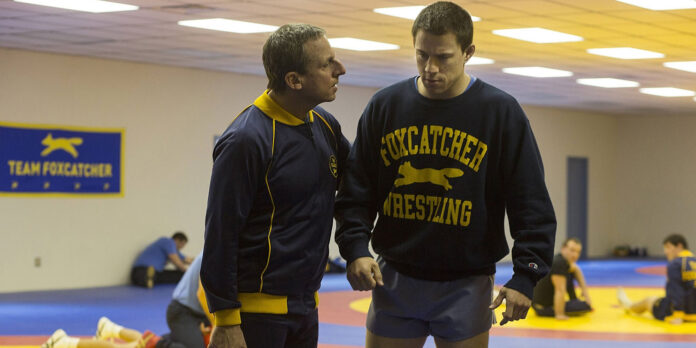 THE STORY – When wealthy John du Pont (Steve Carell) invites Olympic wrestler Mark Schultz (Channing Tatum) to move to his estate and help form a wrestling team for the 1988 Olympics, Mark sees a way to step out of the shadow of his charismatic brother, Dave (Mark Ruffalo). However, du Pont begins to lead Mark down a dark road, causing the athlete’s self-esteem to slip. Meanwhile, du Pont becomes fixated on bringing Dave into the fold, eventually propelling all three toward an unforeseen tragedy.
​
THE CAST – Steve Carell, Channing Tatum, Mark Ruffalo & Vanessa Redgrave

​​​There’s so much potential when it comes to telling a story that has inspirations from real-life events. There’s an opportunity presented to shine a spotlight onto a tale that may not have widespread recognition. At the same time, there’s also a chance to illuminate a deeper commentary about the state of the world. This is an area that director Bennett Miller has found himself in for most of his career, whether it be his early documentary work or subsequent feature films. “Foxcatcher” is a natural progression of the storytelling that has seemed of great interest to this director, and it’s another entry that yields incredible results through its methodical filmmaking and affecting performances.

The central character of this narrative is Mark Schultz (Channing Tatum), an Olympic wrestler who won gold at the 1984 Olympics but now struggles in his more mundane life. The sting is particularly felt as he fights to get out from under the shadow of his more respected brother Dave (Mark Ruffalo). An opportunity arises for Mark when he’s invited to help train a wrestling team for the next Olympics, bankrolled by John du Pont (Steve Carell). Du Pont and his family are insanely wealthy, and his interest in Mark feels oddly sincere at first before turning into something much more controlling and sinister. This relationship takes a toll on both brothers, eventually leading to the tragic day when du Pont murdered Mark on the family estate.

Miller may only have a handful of films credited to him throughout his career, but each one has been a stellar piece of work that takes a quiet and measured approach to tell deeply realized character studies. “Capote” and “Moneyball” both inhabit these spaces, and “Foxcatcher” is no different. Miller’s direction sees sequences played out with moody atmosphere, often with a thunderous silence, and it allows the drama to feel even more heightened. This has always been an element explored in his films, and it feels so refined here. He allows the voluminous spaces, both within the frame and between the sparse dialogue, to inform the world these characters inhabit. It’s a somber world in which people struggle with identity, control, and self-worth. Miller manages to translate these themes so well in his style, which includes a sophisticated soundscape and striking production design. He also always chooses a deliberate pace that manages to keep one engaged.

The screenplay by E. Max Frye and “Capote” scribe Dan Futterman is one that doesn’t indulge in great speeches or pithy retorts. It’s a minimal piece when it comes to the spoken text and finds more richness in its thematic exploration. This story showcases how powerful American mythology can be and the lengths it goes to persevere. It presents a world where the insanely rich prop up their legacies and, in desperate attempts to continue their influence, attach themselves to those with lesser means for exploitation and eventual disposal. Within this commentary lies a more intimate portrayal, a focus on damaged people that are trapped by the shining light of those around them and want to make something for themselves. These ideas run throughout the film and much credit is given to the script for molding such strong thematic material. It works in tandem with the direction to create a deeply compelling portrait.

The performances mainly focus on the trio of Tatum, Ruffalo, and Carell, with each one bringing much to the table. Tatum comes across as the strongest of these players, providing a deeply layered character filled with sadness and torment. Every moment sees his pain and desperation come through, and Tatum’s ability to convey all of this with his body language and facial expressions is something quite special. There’s a physicality that’s understated but incredibly effective. Ruffalo manages to provide a stable rock of support for these characters, and he can radiate warmth even in the coldest of arenas. It’s another characterization that appears subdued but finds a quiet strength to weather choppy waters, sincerely felt right up until his heartbreaking finale.

Carell is the one doing the most outlandish character work as he dons heavy prosthetic makeup and delivers a mannered tone of speech. Of the three, he could be considered the least effective, particularly as his presence can sometimes come across as both gimmicky and underplayed. However, the insidious nature of this character is never lost in his performance, and Carell deserves credit for bringing to life an isolated figure who harbors an unpredictability in the cruelty he dispenses. This is notably felt in the scenes he shares with Vanessa Redgrave, who plays the du Pont matriarch. She only appears in a handful of scenes, but her moments of brutal honesty inform so much of John du Pont’s emotional state, and she gives a memorable performance even in such a limited capacity.

The methodical nature in which this story plays out may not be for everyone. Miller has always been a filmmaker who has taken a more meditative approach to storytelling, but it often leads to a collection of profound moments that run deep thematic commentary. It’s a deliberately set pace, but it offers such a textured environment where the drama and characters can exist in an intriguing space. Armed with a layered screenplay and excellent performances, “Foxcatcher” manages to create another harrowing tale of true-life tragedy that speaks to something as grand as American dynasties, to an intimate examination of isolation and greed. It’s an astounding achievement that’s not only one of the year’s best, but also deserves to be considered as one of the great films of its decade as well.