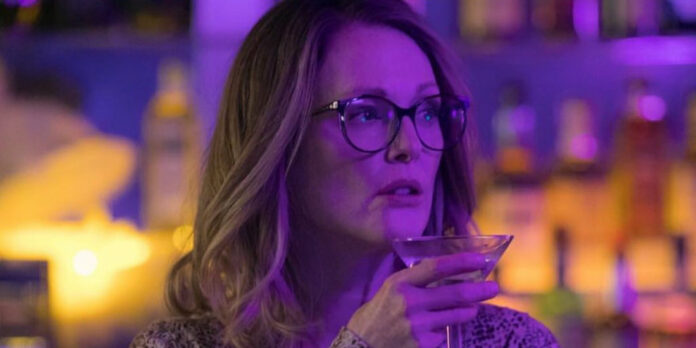 “Gloria Bell” opens at a dance club, the camera striding across the dancefloor. At center focus, we approach the back of a woman sitting at the bar having a drink. That woman is Gloria Bell (Julianne Moore), the mother of two adult children, now nearly twelve years divorced. Going to the club, a meeting place for single adults of a certain age, is one of several of Gloria’s routine activities, like going to her day job, exercising with her friends, singing ballads as she drives from place to place. Gloria is an average middle-aged woman living alone in LA, and she adores dancing. In “Gloria Bell,” this innocuous fact is meant to convey something significant about the character of our titular protagonist.

What is so remarkable about director Sebastián Lelio’s English language reprisal of his 2013 film, “Gloria” is that in calling attention to the quotidian facets of Gloria’s life, shown like a series of vignettes, Gloria feels nearer to us, like someone in our lives, dealing with things not so foreign to the imagination. Struggling with an unwieldy neighbor, learning to understand the sometimes inexplicable behavior of our family members. Dating. Falling in love. Feeling vulnerable. When Gloria meets Arnold (John Turturro), a man separated from his wife who recently underwent gastric bypass surgery to lose over one hundred pounds, her daily life is interrupted, but never consumed, by Arnold’s courtship, despite the emotional supplications of loneliness.

When Julianne Moore expressed her desire to make an American version of the original, she insisted that Lelio take charge of this project again. The resulting script, an adapted version of Lelio’s script by Alice Johnson Boher, is adjusted to the environment and social conditions of an entirely different woman, and the dialogue is corrected to follow suit, yet the final product traces a narrative that is practically identical to the Chilean “Gloria,” despite ample creative wiggle room. Nevertheless, “Gloria Bell,” and “Gloria” for that matter, are fun, feel-good movies, filled with funny, charming, sometimes sexy moments that showcase their radiant leading ladies. Julianne Moore undoubtedly breathes new life into the material, offering a vibrant performance tinged with melancholy, yet resolutely tenacious. “Gloria Bell” is a magnificent platform for one of Hollywood’s finest actors, whose nuanced performance is never over-the-top, but in fact evidence of Moore’s deep intelligence, which feeds her ability to fill out all the small psychological dimensions of her character.

While audiences should feel so lucky to see Moore find such fabulous expression through this character, the question still stands as to why rising star Sebastián Lelio chose to reinvest his time and efforts in re-staging such a humble project (though perhaps the enthusiasm of an interested superstar is reason enough). “Gloria Bell” is difficult not to like, but what it lacks in controversy is matched with complacency. Given the impressive artistry and dramatic weight of Lelio’s “A Fantastic Woman,” which won the academy award for Best Foreign Picture, “Gloria Bell” might feel like a step back for for Lelio’s fans, with a film that is visually safe and that emotionally never goes more than waist deep into the waters.

Like a glass of white wine, “Gloria Bell” is nevertheless a refreshing, deeply satisfying watch. Moms aren’t just moms, they’re human beings and they’re capable of having universally relatable stories without foregoing their distinguishing mom qualities. “Gloria Bell” reminds us of this truth, which is so often forgotten.