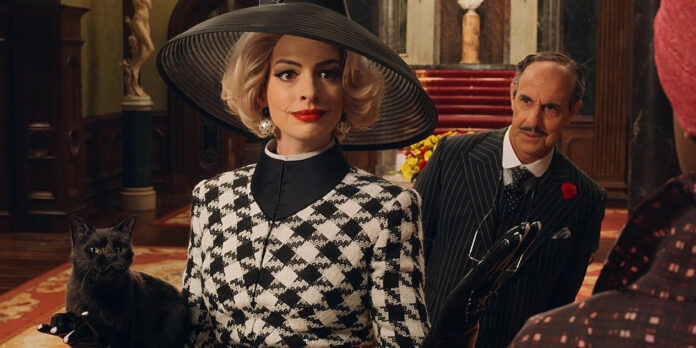 THE STORY – A little boy and his kindly grandmother thwart the efforts of a coven of witches to rid Britain of children by turning them into mice.

“Witches are everywhere. They could be a nurse, your teacher, the old lady offering you candy!” warns Chris Rock as our narrator in the opening of Robert Zemeckis’ remake of “The Witches.” It’s an engaging intro, and Rock’s narration sets the tone for some Halloween fun. “Most of all,” he warns us, “Witches hate children.”

Do you know what else witches hate? Decent CGI. The effects in this movie look like something you’d see in 2001. I’ve supported Robert Zemeckis him time and time again. Honestly, I think the man is a visionary. “Forrest Gump,” “Cast Away,” “Flight,” I’m even a “Polar Express” supporter (there are literally dozens of us!). I can’t even count the number of times I’ve told people to watch “The Walk” because it’s so underrated. Then he hits me with “The Witches,” a remake of the 1990 film adapted from the Roald Dahl novel. I wonder if anyone ever woke up one day and said to themselves, “please let today be the day Robert Zemeckis decides to remake the 1990 film “The Witches.” From the bottom of my heart, I don’t think that ever happened. Well, he decided to adapt it anyway, and the results are not perfectly splendid.

If there is one word to describe this film, it’s campy. Dare I say I got “Cats” vibes while watching “The Witches?” The plot is bonkers as we follow the narrator through his childhood after being orphaned and going go live with his grandmother (Octavia Spencer.) In rural Alabama, he meets a witch at a local supermarket. The boy’s grandmother warns him of dangerous witches who wear gloves to cover up their claws, wigs to cover up their bald heads, and caked makeup to disguise their monstrous smiles. They’re demons dressed as people walking around every town preying on children. The boy and his grandmother immediately flee to the Grand Orleans Imperial Hotel to get away from the evil witches. They don’t know that the witches are already there with their leader, the Grand High Witch (Anne Hathaway). It’s there that the coven is hatching a plan to use candy bars to turn children into mice and eradicate them. It’s bizarre, to say the least. I guess you could take a step back and say the movie is a metaphor to make children stay away from strangers. Is it? Or is it perhaps a movie about children being turned into mice by a bald Anne Hathaway?

Speaking of Anne Hathaway, from the moment she steps on screen in her checkered black and white suit, black cat in hand and coven surrounding her, there’s no doubt she’s ready to entertain. With her thick accent, fashion-forward outfits, and wigs (which do indeed fly), Hathaway gives this her all. It’s a zany performance that you can’t look away from, and she owns every second hamming it up on the screen.

Octavia Spencer is the saving grace of “The Witches” as Grandmother. She’s a caring and devoted woman who would do anything for her family. She charms in all of her scenes with her grandson and isn’t afraid to take on the Grand High Witch. She’s got secrets from her past that have prepared her for the witches, and she knows how to make potions of her own. Between this and “Ma,” I have started to wonder if Octavia Spencer is the queen of Halloween and the answer is yes.

I have to give props to the children in the film, particularly Jahzir Bruno. He holds his own with Anne Hathaway and Octavia Spencer. His scenes with Octavia Spencer are quite nice, displaying the grandmother/grandson dynamic. When he is turned into a mouse by the evil witches, he must rely on voice acting to carry his performance and he does so with no problem. He’s able to convey the emotions necessary to tell the story.

Stanley Tucci is heavily advertised in the marketing campaign as Mr. Stringer, the hotel manager. As an avid “The Devil Wears Prada” fan, I was thrilled by the prospect of Andy and Nigel reuniting on screen. Think of the fashion montage that could have been between The Grand High Witch and Mr. Stringer. Sadly, Stanley Tucci is underused in the finished product of the film…When you have Stanley Tucci, he should be in every scene. I don’t make the rules. It’s just how it goes.

The longer that “The Witches” went on, the more I began to wonder who the film was for? The writing and humor are intended for a younger audience. However, if I saw this as a kid, I would have been petrified of the witches’ monstrous grins and horrific plans to kill children. As an adult, the film isn’t scary, funny, or must-watch entertainment; it’s just an unnecessary remake with bad CGI. “The Witches” is a campy Halloween CGI-fest that never finds its footing. Anne Hathaway and Octavia Spencer turn in memorable performances but sadly can’t save this pointless remake.