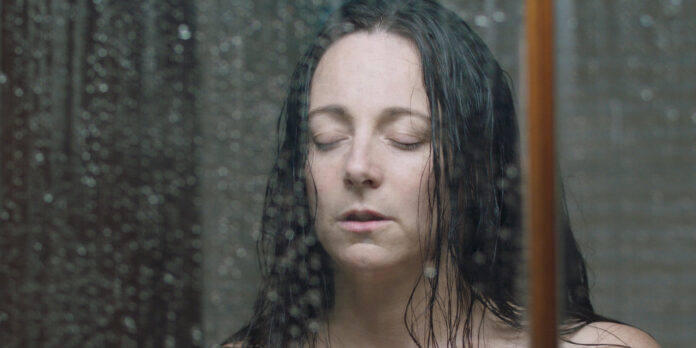 THE STORY – Middle-class economics lecturer Cecilia lives with her young son, Juan. Housekeeper Nebe helps out with chores and childcare. One stormy night, Nebe’s son knocks at the door, but Cecilia doesn’t let him in. On hearing that he has been ‘disappeared’ by the police, she is forced to face the consequences of a decision that betrays wider systematic inequalities. A formal and disarming brilliance characterises director Francisco Márquez’s eerie treatment of the aftermath of ‘the crime’, with a heightened sense of paranoia increasingly evident as Cecilia’s calm exterior begins to crack.
​
THE CAST – Elisa Carricajo, Mecha Martínez & Eliot Otazo

​As the film fades in we’re introduced to darkness which soon becomes filled with neon color. These aren’t just gels, these are landscapes, built to represent something. We continue to circle through all of this until daylight hits us and two small boys are sitting together on a track. The lights were just part of a haunted house, an attraction that’s supposed to have jump scares, gothic horror and frightful scenery. Much like “A Common Crime,” this haunted house seems to be a quiet and a more ordinary approach to a genre that’s pretty self-explanatory nowadays.

It may have just been marketed incorrectly, but from the description and promotional material, it seems clear that “A Common Crime” is supposed to be a thriller with elements of horror. Following sociology teacher Cecilia (Elisa Carricajo), it seems as if we will see our protagonist slowly unravel thanks to the unexplainable that will mess around with her psychosis. She’s initially pushed around by everyone, including her youngest sons who are rude, talkback and take things for granted. The camera remains subtle but ever moving, going with Cecilia but not enough to cause fear. Instead we pan around her house as her kids leave for school, something that seems very ordinary. There is too much craft and workmanship for this to just be lazy or misconstrued. Maybe the mundanity of her life is a horror in itself? Maybe it’s inescapable and even general horror movie tropes are themselves exciting? It’s hard to know with “A Common Crime” what’s intentional and what may just be there for no good reason at all.

A thriller without tension is hard to comprehend and when the inciting incident has happened, it rarely speeds up. One night, the son of her maid is heard desperately knocking on Cecilia’s door but she refuses to open. The next day he’s found dead and her conscience lies guilty, being haunted by his presence wherever she goes. It seems Cecilia is trapped in a routine, in being middle-aged and that this form of guilt is an approach to be rid of it. Supernatural elements begin to affect her more, as a scaletrix sets itself off at night while she merely watches it from afar. In probably the most visceral moment of the film, a red light continues to flash on her but she never looks away. There’s not much to delve into with Carricajo’s performance during the film as she remains the same but it seems that all of these incidents are waiting for an explosion at the film’s end.

The quietness of the film works in its favor and against it subsequently. When we’re moving through apartments at night, it’s hauntingly beautiful. Cecilia is clearly grasping at her own responsibility within his disappearance and there’s a lot to say with the class divisions of Argentina as Cecilia struggles to find answers. As she walks home from her maid’s house, she continues to walk through a street of the working class, a much rougher area to her house that we’ve wandered through previously. There’s a set of entrapment here. There’s no climbing the ladder or falling down from it. We’re rooted in our spots for the foreseeable future. It’s a thought that feels even more claustrophobic in the film’s given ratio of 4:3, a look that’s gaining popularity within more independent films lately.

But the final scene will either sell you on this film or the polar opposite. Cecilia sits on a rollercoaster alone and experiences its twist and turns before eventually screaming in agony, vocalizing all of her emotions that have stayed in during these supernatural events or encounters with people that may have known this boy. If you’re looking for possession or something otherworldly then “A Common Crime” isn’t for you. But if you’re sold on the film’s indistinct definition of a “thriller,” then it’s worthy of your time.