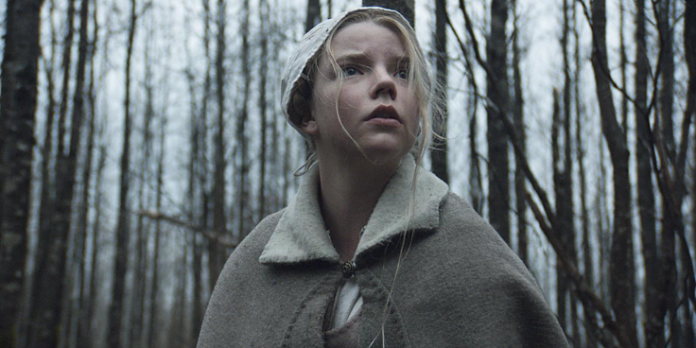 THE STORY – In 1630 New England, panic and despair envelops a farmer (Ralph Ineson), his wife (Kate Dickie) and four of their children when youngest son Samuel suddenly vanishes. The family blames Thomasin (Anya Taylor-Joy), the oldest daughter who was watching the boy at the time of his disappearance. With suspicion and paranoia mounting, twin siblings Mercy (Ellie Grainger) and Jonas (Lucas Dawson) suspect Thomasin of witchcraft, testing the clan’s faith, loyalty and love to one another.

Even now, as I write this, I’m still shaking. And trust me, you won’t be able to shake off the horror that is writer/director Robert Egger’s terrifying debut, “The Witch.” It’s easily the most disturbing yet artful film to come along in quite some time. The experience will render your blood cold and your mouth speechless. It’s the first great film of 2016 and a true breakout for the film’s director and star.
​
​It’s the 17th century in New England, and a Puritan family has been outcast from their village due to their strong religious beliefs, which come into conflict with those of the village. The family’s patriarch, William (Ralph Ineson), has raised his family of 5 children to hold firm in the belief of God and his teachings through their savior Jesus Christ. His wife Katherine is aided in this firm upbringing (Played by the always deeply disturbed Kate Dickie). However, after their infant son Samuel mysteriously vanishes into the woods without a trace, they begin to suspect the devil’s work may be getting done in the form of witchcraft by their daughter Thomasin.

Eggers’ ensemble for this film is wholly committed to their roles, and all turn in truly unnerving performances. Anya Taylor-Joy, who plays Thomasin, is as much of a discovery as Robert Eggers and does a reasonably convincing job of taking us through the emotional journey her family suffers throughout the film. Kate Dickie is also maniacally troubled in her emotionally crazed role of a mother who can’t seem to find an answer in the faith provided by her husband for their family’s troubles. Though her role here may be compared to her work on HBO’s “Game of Thrones,” it’s still a passionate performance that teeters the line in how far to push emotional distress before it becomes nearly comical.

This is not your typical horror movie filled with foolish moments, and cheap jump scares, which incites laughter from the audience (A pet peeve of mine when watching any horror film). Audiences will eagerly await with tension warping their bodies for the inevitable jump scare, which allows them to release that tension with laughter. However, under the guidance of Robert Eggers, that laugh never came. There was also a lack of jump scares, save for a moment or two here and there. This is a cold and bleak film. Its pace is perfectly calculated, allowing for the overwhelming sense of dread to wash over you slowly. The best kind of horror films leave you feeling disturbed, and that is what “The Witch” does supremely well. Some films want to achieve this goal with an overabundance of blood and gore moments. Robert Eggers instead goes the thought-provoking route with his screenplay. Here, he is punishing the practice of religious fanaticism inhabited by the Puritan family and tackling strong ideas of faith in one’s religion and their loved ones. Egger’s idea of what pure evil really is and what forms it can take (Get ready for the dark goat known as “Black Phillip”) is petrifying and stunningly captured by cinematographer Jarin Blaschke.

Many have said that this is the best modern-day horror film, as it harkens back to 1973’s “The Exorcist” in how it conveys its horror in a frighteningly realistic and grounded manner. However, the film’s final scene did leave me scratching my head at how tonally odd and misplaced the moment felt compared to the rest of the film. And for the sake of spoilers, I don’t want to go much further into it. Perhaps another viewing will clear this one tonal misstep for me. But I can tell you right now that I don’t want to watch “The Witch” again as of this moment. I’m simply not over the first viewing experience. And I mean that as a compliment.​