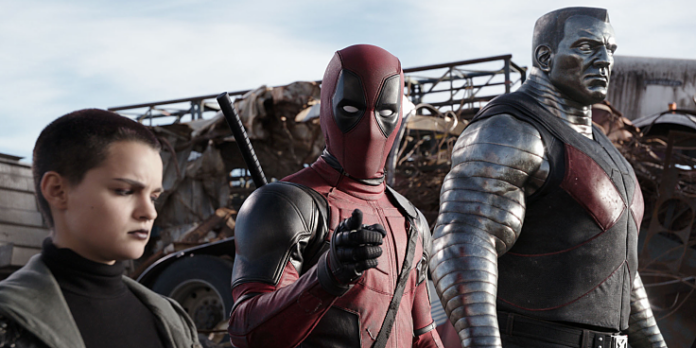 THE STORY – Wade Wilson (Ryan Reynolds) is a former Special Forces operative who now works as a mercenary. His world comes crashing down when evil scientist Ajax (Ed Skrein) tortures, disfigures and transforms him into Deadpool. The rogue experiment leaves Deadpool with accelerated healing powers and a twisted sense of humor. With help from mutant allies Colossus and Negasonic Teenage Warhead (Brianna Hildebrand), Deadpool uses his new skills to hunt down the man who nearly destroyed his life.

Deadpool is back on the big screen, and luckily (For us and its star) the film gets it right. It is brash, vulgar, offensive and downright fun. In an age where superhero films are becoming too familiar with their “origin stories” and genre trappings, “Deadpool” comes along, tears all of that down, and asserts itself as a different kind of superhero film. We may have gotten early glimpses of this kind of film in other superhero genre exercises such as “Watchmen” and “Kick-Ass,” but “Deadpool” gets more elements right than those and then some.
​
Wade Wilson is a former special forces operative, who was honorably discharged and now finds himself in the underbelly of his city, serving as a mercenary. He’s a bad man who is beating up worse men (As he puts it) and all in the effort to protect young women. He’s crass, has an answer for everything and completely 100% juvenile in all of the loveable ways you could imagine. He meets his match for these qualities in Vanessa (“Homeland’s” Morena Baccarin) and the two develop a strong relationship that goes beyond the physical and ventures into “You complete me” territory from “Jerry Maguire.” Everything seems to be going well until Wade is stricken with terminal cancer and in an effort to save his life so he can continue to be with the woman he loves, he volunteers for a highly illegal medical program (Led By Ed Skrein), which imbues him with superhero powers, at a cost.

“Deadpool” might be the most self-aware superhero film of all time. It’s more raunchy and juvenile than “Kick-Ass” and just as violent as “Watchmen.” There are two key components though which make it all work. One of them is Ryan Reynolds who has finally found the role which will hopefully make him into a household name after attempting for years to find the definitive role which would make his career. He tried it once years ago with “The Green Lantern” and even that disaster of a film is not safe from Reynold’s spews of sexual innuendos and creative (Yet not PC nor PG) humor. He has oodles of charisma and truly makes the character stand out, especially when he shares scenes with some side “X-Men” characters in the film. The other component is the love story. Baccarin and Reynolds click in such an organic, fun, and endearing way that you are constantly rooting for them to be together. The film is surprisingly all about love in the face of terrible circumstances, whether it’s the physical, intimate, or circumstantial. Wade Wilson and Vanessa are easily in the running for my favorite power couple of 2016.

As much as director Tim Miller and his writers get right, there are still a few beats that don’t quite land. The humor is so wild, fast and over the top that inevitably, some jokes do land better than most. Some may even go over the heads of some viewers (There is a breaking of the fourth-wall method on display here, which takes the opportunity to self-reference the movie itself, the film industry, and Reynold’s own career). The villains of the story are not as developed as Reynolds (And let’s be clear, this is Reynold’s show). Sure, they do terrible things, but Ajax (Skrein) and his partner in crime Angel Dust (Played by action female star Gina Carano) are one dimensional and not nearly as interesting as they should be. However, these minor distractions (Including the need to incorporate the “X-Men” into the plot of the film itself) don’t succeed in bringing the film down. The film moves along at a quick pace and does not overstay its welcome allowing this to be the most entertaining superhero film since “The Avengers.”

“Deadpool” establishes itself from the very beginning with its tongue-in-cheek opening credits where you realize that this is a film that clearly knows what it is, and is very comfortable putting that on display for the world to see. It may offend some while others who are disenchanted with the relentlessly tired superhero genre may stay away altogether. However, as Deadpool states in the film to the audience via voice-over “This is a different kind of superhero story.” It’s one with a seriously sweet love story at its center, which also happens to feature murder, cancer, cocaine, sexual innuendos, buckets of blood and total disregard for your opinion on the matter. Just roll with it and have a blast. ​