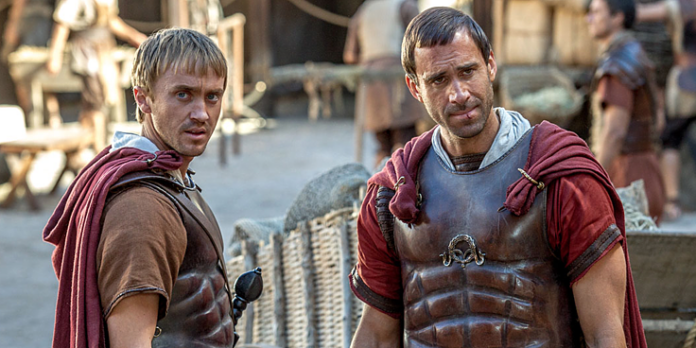 THE STORY – Roman military tribune Clavius (Joseph Fiennes) remains set in his ways after serving 25 years in the army. He arrives at a crossroad when he’s tasked to investigate the mystery of what happened to Jesus (Cliff Curtis) following the Crucifixion. Accompanied by trusted aide Lucius (Tom Felton), his quest to disprove rumors of a risen Messiah makes him question his own beliefs and spirituality. As his journey takes him to places never dreamed of, Clavius discovers the truth that he’s been seeking.
​
THE CAST – Joseph Fiennes, Tom Felton, Peter Firth & Cliff Curtis

Biblical epics can be very hit or miss. They have always been a fixture of Hollywood dating back to the early days of film in attempting to portray biblical events and its character on screen. Even this year’s “Hail, Caesar!” explored this very notion with humorous results. However, this is the real deal. “Risen” takes itself very seriously and succeeds as a story where most religious films don’t. This is due to its non-biblical adaptation of a unique story that unfolds as a detective film set in the times of the rule of the Roman empire. The film uses this structure to its advantage in its first half to great effect, that is until the second half starts to cater to the religious demographic a little too hard, and starts to lose its engagement with the more casual moviegoer.

There is an impending political/social unrest amongst the people of Jerusalem following the death of the prophet Yeshua. Pontious Pilate orders an agnostic Roman Centurion named Clavius (Joseph Fiennes) to investigate into the disappearance of the body. Along the way, he interrogates Yeshua’s apostles and other biblical figures in hopes of solving the mystery of where the deceased body has gone to. However, what he does not realize is how his own faith (Or lack thereof) will be tested as the mystery continues to unfold.

Joseph Fiennes sells the inner torment of the character Clavius with subtle effect. One wonders why he never truly broke out into the “Hollywood leading man” territory when his talents are perfectly used in films such as this. He is commanding, cynical, driven and sells the transformation that his character undergoes very well. However, he is not helped by the actors that surround him. Peter Firth (Pontious Pilate) is played as an evil villain lacking the subtlety, and some of the bit supporting players who round out the proceedings come across as untrained and mismatched when pitted against the gravitas that Fiennes is trying to bring to his role.

While the idea for the story may be fully engaging, and the film’s execution of it may be half-engaging, the visual look of the picture isn’t engaging at all. Director Kevin Reynold’s look of the film almost appears to be something that looks like it was made for television and the budget was spread too thin. It can’t hold a candle to films such as “Noah” and “The Passion of the Christ” in terms of their visual splendor and as a result, the film suffers for it. These faults are most apparent during the CGI-heavy scenes and the opening battle sequence which uses closeups and shaky handheld camera tricks to mask its inability to communicate a clear sense of what is really going on. The supernatural visuals are exceedingly bland and distracting, especially when they’re used as the emotional climax of the film to achieve Clavius’ transformation. Had the film’s second half kept itself grounded in reality as much as the first half does, then it’s possible the film could  have had a more global effect on its audience.

With that said, “Risen” will have to settle for being good for those it was created for. It fulfills its promise of being a spiritual film that shows a non-believer the true power and love of Christ. However, for those who are not so engulfed in the Christian faith, they will be left rolling their eyes in the second half of this film. It’s a missed opportunity to tell a riveting story with the proper execution. Fiennes does all that he can with the leading role and is the best part of the film, but when everything else that surrounds him is so shallow it results in a film that will be forgotten about in a month.