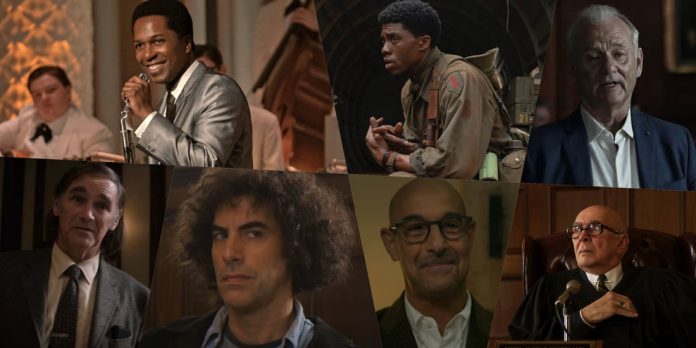 It seemed as if the Best Supporting Actor Oscar race was all locked and ready to go for a while. Knowing that Chadwick Boseman’s final performance in “Ma Rainey’s Black Bottom” was set to premiere this season, a posthumous win in the vein of Heath Ledger seemed all but certain. However, Netflix surprised Oscar prognosticators two months ago when they revealed that Boseman’s performance would be submitted for Best Actor. That switch put a category in flux that was once assumed to be complete. What does a category look like when the presumed frontrunner switches categories? With several unique contenders, Supporting Actor now has endless possibilities. As we begin to get a clearer sense of what the 93rd Academy Awards can look like, let’s breakdown the current state of the race.

While Chadwick Boseman’s work in “Ma Rainey’s Black Bottom” was originally assumed to be the contender here, we may end up seeing the late actor double-nominated across two categories. Shortly before his tragic death in August, Chadwick appeared in Spike Lee’s “Da 5 Bloods.” While his character of Stormin’ Norman only exists in flashbacks and hallucinations, the gravity of his performance really contributes immensely to the heart of the picture. Having now lost this brilliant actor, the performance has new resonance and weight. While his work seems primed to be honored in Lead Actor, it is not out of the realm of possibility that his name finds its way to the top of supporting competition as well.

Just like another film that will be discussed later in this piece, it was initially looking like the ensemble of Regina King’s “One Night in Miami…” was all set to compete as supporting actors. However, Amazon made it easier by splitting the ensemble across lead and supporting. That leaves Leslie Odom, Jr. and Aldis Hodge competing against each other in the supporting category for their roles as Sam Cooke and Jim Brown. Given that his “Hamilton” recognition reached peak popularity this summer with the Disney+ release, it seems that Odom’s moment is here. Whether he will be able to split the difference with his equally impressive co-star will be a matter of who AMPAS voters leave the film thinking about most.

When Bill Murray lost Best Actor in 2003 for his acclaimed work in Sofia Coppola’s “Lost in Translation,” many were quick to assume that the veteran comedian would be deemed overdue and win on his next try. As it turns out, he has yet to have another try back at the dance in the 17 years since. That may change now with his reunion with Coppola in “On the Rocks,” which will certainly be remembered as one of his best performances. As an eccentric father helping his daughter through a potential crisis, Murray brings both levity and a welcome depth to the film. He showcases what he does best and what he is capable of as a dramatic actor. But with an A24 production in conjunction with Apple TV+, it will be interesting to see how Murray’s campaign plays out. But with potential precursor love and the right narrative, this may be the year to make up for the 2003 ceremony.

Given Stanley Tucci’s vast and popular career, he has only been nominated for an Oscar once for “The Lovely Bones” in 2009. At the time, many were happy to see the veteran character actor recognized by his peers but were disappointed that he wasn’t nominated for his superior work in “Julie & Julia.” Instead, his nomination for “The Lovely Bones” seemed primary for being the best part of an otherwise bad film. This year, he has “Supernova,” which finds him paired opposite Colin Firth as a couple managing early-onset dementia within Tucci’s Tusker. While “Supernova” may not be an across the board contender, it would be a pleasure to see the always reliable Tucci back in the awards conversation.

​And then we have Netflix’s “The Trial of the Chicago 7,” which could fill two years’ worth of supporting actor lineups. Not since 1974’s “The Godfather: Part II” have more than two actors been nominated in the same category. It’s an incredibly rare feat and one that I don’t envision being broken this year. Sacha Baron Cohen, Mark Rylance, Frank Langella, Yahya Abdul-Mateen II, Eddie Redmayne, Jeremy Strong, Alex Sharp, John Carrol Lynch, Michael Keaton, and Joseph Gordon-Levitt are all in contention to some degree or another. Assuming the nominations max out at two, I’ll assume that Cohen, Rylance, and Langella are top tier

​The question isn’t so much who gets in, as it is who misses out. Given the success of his latest Borat venture and industry love for years now, I think Sacha Baron Cohen is the only one given. It also helps that his Abbie Hoffman is the closest thing the film has to a lead character, a showy one at that. After that, it’s the battle of the Tony-winners. Rylance won five years ago for “Bridge of Spies,” while Langella has yet to win or be nominated again since his work in “Frost/Nixon.” Looking at the state of the campaign, Langella has been far more active on the circuit, promoting his role as the corrupt Judge Hoffman. It is very traditional AMPAS-friendly work that voters should respond to. But the reason why it isn’t a slam dunk is that Rylance’s sympathetic attorney William Kuntsler is just as much an Oscar-friendly role. How the race ends up playing out will have to wait until precursors give us a clearer sense. But it looks like what was once the Chicago 10 is at least narrowed down to Chicago 3; things will start to be clearer.

This is clearly a fluid race. Even with these top tier contenders, we still don’t know what surprises are awaiting us. Does “The United States vs. Billie Holiday” have any contenders in store? Will one of the “Judas and the Black Messiah” men compete as supporting? While we still have many months to go before nominations are revealed, it’s nice to at least have a sense of where things are going. Here is a ranked breakdown of where I see the race as of now…

You can check out our most recent Oscar predictions here. Who do you think will be nominated for Best Supporting Actor? Let us know in the comments section below or on our Twitter account.