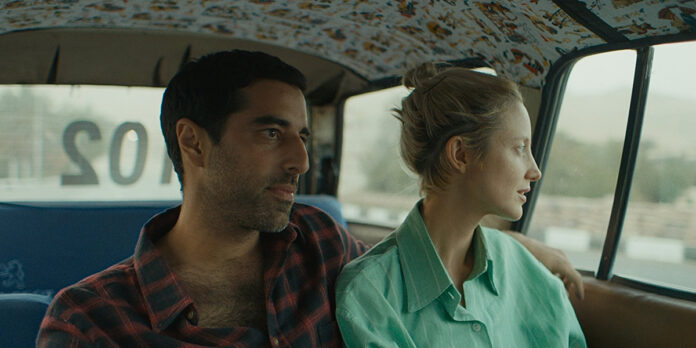 THE STORY – When British aid worker Hana returns to the ancient city of Luxor, she meets former lover Sultan. As she wanders, haunted by the familiar place, she struggles to reconcile the choices of the past with the uncertainty of the present.

In the essay, “Sigmund Freud’s Archaeological Metaphor and Archaeology’s Self-Understanding,” Julian Thomas explains that “archaeology encapsulates a series of evocative themes: of repression, of loss and concealment, of discovery and revelation.” These themes are fittingly present in writer-director Zeina Durra’s sophomore feature, “Luxor.” It also highlights what Thomas touches on: Freud’s archaeological metaphor. As a man obsessed with Egypt, he made a connection between the excavation of ancient Egyptian sites and psychoanalysis. As archaeologists dig through the earth to bring forth material hidden beneath, so too does psychology as it digs through the unconscious to bring forth repressed memories. Both processes are about the rediscovery of something and “Luxor” is about the rediscovery of love. With the mix of the hustle and bustle that the film’s titular city brings and a soft score of strings that accompanies it, the “world’s greatest open-air museum” has calming energy to it. Luxor is a character in its own right, and for a film without much conflict or action, it feels like you’re watching a virtual tour – a perfect escape during these quarantine times – but it’s also an intimate, spiritual story of second chances.

Hana (Andrea Riseborough) is a trauma surgeon on leave and arrives in Luxor to; one can assume, try to ease her mind from the horror she witnessed during her time spent serving in a war zone. She seems like a regular tourist, as much of the film’s first half sees Hana touring various tombs and temples. These crumbling, ancient beauties are all gorgeously and attentively shot, cinematographer Zelmira Gainza making sure to fill the frame with as much detail as possible. It’s quiet and pensive; the viewer is escaping into this environment with the film’s protagonist. But when Hana runs into an old flame, Sultan (Karim Saleh), we learn this isn’t Hana’s first visit to what was once the Egyptian capital city of Thebes.

“Luxor,” as previously said, is a film about rediscovery – or you could also say reconnection. As Hanna and Sultan reconnect after 20 years, they also rediscover the city’s magic where they first met. The narrative then slowly peels back the layers of this relationship and themselves as individuals; how they have both changed over these past two decades, and how Luxor has changed too. While Sultan laments the renovation of a hotel – “there’s something lovely about it being so faded and imperfect” – they both reflect on aging, and in Hana’s case, what aging means to a childless woman in her early 40s. As Hana is confronted with her fertility and sees the window of motherhood closing, the script comes dangerously close to saying that a woman’s only purpose is to bear children. But luckily, the focus quickly shifts to other things: the couple’s long, albeit vague, history and how time shapes and rewrites a person (or an ancient city’s) history.

“Luxor,” for lack of a better word, is perhaps the most chill movie of the year as, while its themes intelligently tie together, there’s not much to it but two people falling in love with each other and a city again. It’s far from perfect, though. It could benefit from more subtitle translation for added context, and there’s one character connected to Hana whose purpose is unknown and they eventually disappear from the narrative entirely. Despite some hiccups, the chemistry between Riseborough and Saleh makes the film. For such a transformative actress, it’s nice to see Riseborough in an interesting role that doesn’t demand too much. “Luxor” is about the importance of history, preserving it, and giving love another chance. But will they take it?