“THE VAST OF NIGHT” 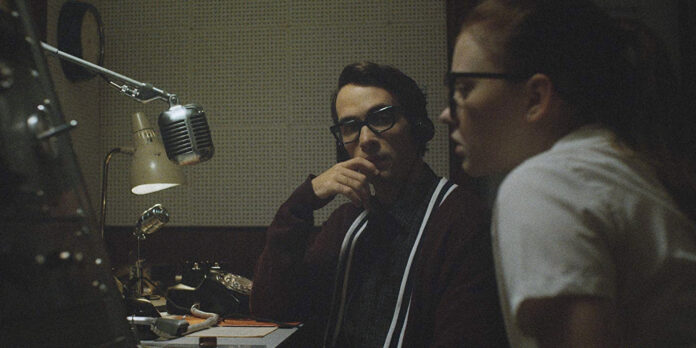 THE STORY – In the 1950s, two kids search for the source of a mysterious frequency that has descended on their town.
​
THE CAST – Sierra McCormick & Jake Horowitz

​A black and white program titled “Paradox Theatre” plays on a television in a 1950s living room. Zooming in on the screen, the name of the episode appears: “The Vast of Night”. The black and white image expands, filling the screen, and turning into color. The opening of Andrew Patterson’s directorial debut is a clear nod to Rod Serling and his celebrated anthology series, “The Twilight Zone”. But while the film’s introduction may hint that it’s meant to play out in the style of the series’ science fiction narratives, it becomes more of an homage to the 1938 radio broadcast of “The War of the Worlds”.

With snappy, quick-paced dialogue – in a script by James Montague and Craig W. Sanger – we are introduced to charismatic radio host, Everett (Jake Horowitz), and 16-year-old switchboard operator, Fay (Sierra McCormick). The relationship between the pair feels much more like a person of stature and his protégé than a friendship at first as Fay seeks Everett’s guidance on how to use her new voice recorder and he playfully teaches her how to conduct interviews. They both have a fondness for technology, especially Fay who, as the excitable school girl she is, talks Everett’s ear off about what the future has in store including self-driving cars, tube trains, and “tiny TV telephones”. Futuristic elements were frequent in “The Twilight Zone,” and as the pair part ways, the film’s nod to 1950s sci-fi television continues as, once again, the scene is transformed for a few moments into the old circular boob tube, the screen flickering in a blue hue, and Fay settles at the switchboard. In the background, she has Everett’s radio show playing, but as he’s about to go over the news of the day, he’s interrupted by a strange sound coming through the airwaves. Soon after, the sound comes through Fay’s switchboard and she receives calls from frightened residents who claim to see flying objects in the sky.

Everett replays the signal on the radio to get some answers, to see if the sound is familiar to anyone who may be listening. It’s in this moment that “The Vast of Night” becomes reminiscent of a famous episode of the radio anthology series, “The Mercury Theatre on Air”. The episode being the one narrated by Orson Welles titled “The War of the Worlds,” an adaptation of the H.G. Wells novel. The broadcast was famous for its breaking news style of storytelling in its first half which made many listeners believe that an alien invasion was actually taking place. The panic that ensued made it perhaps “the most notorious event in American broadcast history,” according to “Slate” writers Jefferson Pooley and Michael J. Socolow. However, the scale of the panic, which was previously described as “upwards of a million people,” was debunked as “fake news” created by newspapers in an attempt to paint radio, their new news competitor, as “irresponsible and not to be trusted.” It has been said that there were actually very few who tuned into the broadcast, but panic was among them all the same. The same can be said for Everett’s radio show. While most of the town is watching a basketball game at the local high school, some begin to call the radio station to speak of their experiences with the “people in the sky” and others seek him out in a panic. Conspiracies are laid out, military secrets uncovered, and a long history of visitation and its effects on the residents turn this town into its own Roswell, New Mexico. The film is excellent here at creating real tension and atmosphere as the screen goes to black and we are made to feel we are at home listening intensely to a “The War of the Worlds” type radio program – our living room slowly losing all its comfort.

Together, Fay and Everett become their own Mulder and Scully as they team up to figure out what the signal could be. Horowitz and McCormick have fantastic chemistry and shine in their superb performances as they take it on themselves to try to unlock the mystery of what’s hovering above their town. Along with the first-time director himself, Horowitz is a talent to watch. While the biggest fault of the writing is the lack of backstory for its leads, especially Everett, the film’s production design by Adam Dietrich, cinematography by Miguel Ioann Littin Menz, and score by Erick Alexander and Jared Bulmer are its triumphs, creating an atmosphere that feels apocalyptic. In 1954, Ben Gross, a “New York Daily News” radio editor, recalled in his memoir a taxi ride in deserted Manhattan streets just as “The War of the Worlds” was ending. The streets in “The Vast of Night” are also deserted. The film takes place at night, and no matter how small the town is, it feels incredibly vast in its darkness. The vastness is also emphasized by the lack of transition. Instead of cutting from one location to the next, the camera moves in one continuous shot through town, traveling from Fay’s location to the high school to the radio station. The camera moves close to the ground like a snake slithering through the grass. Some of the best cinematography of the year, no doubt.

“The Vast of Night” is as much commentary on the power of the media as it is on the power of myth. The myth of “The War of the Worlds” and its effects on America is just as alluring as the myth that there’s life among the stars. And despite this frightening and mysterious force, we want to believe.