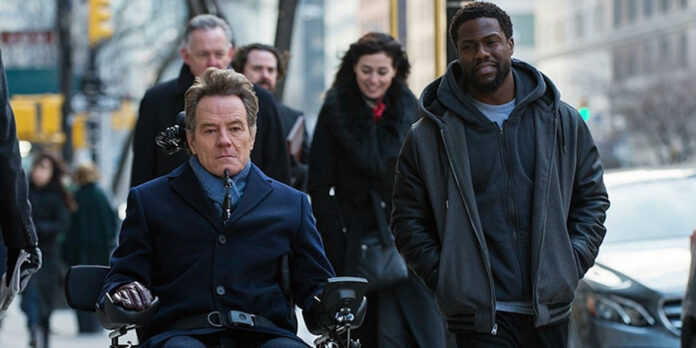 THE STORY – Phillip is a wealthy quadriplegic who needs a caretaker to help him with his day-to-day routine in his New York penthouse. He decides to hire Dell, a struggling parolee who’s trying to reconnect with his ex and his young son. Despite coming from two different worlds, an unlikely friendship starts to blossom as fun-loving Dell shows curmudgeonly Phillip that life is worth living.

​​​And you thought “Green Book” had problems? Trading in racial issues for disability issues, “The Upside” is the newest take on the tired formula of two people from opposite sides of life who come together and formulate a friendship and ends with each of them learning something from the other. Neil Burger’s new, tone-deaf film is not funny, entertaining or as uplifting as the original French foreign film it is based on, “The Intouchables.” Couple that along with recent events surrounding stars Bryan Cranston and Kevin Hart and you have a film that is manipulative and more awkward and uncomfortable than it is sweet and charming.

Dell Scott (Kevin Hart) is an ex-convict who is on parole and needs a new job. Not only does his parole officer require he receives three signatures proving that he is actively searching for work but he also has an ex-wife and son that he needs to provide for. He decides to go on a job interview for what appears to be a “janitor” position but turns out to be a live-in life auxiliary for the wealthy Phillip Lacasse (Bryan Cranston), a middle-aged businessman with an affection for opera and modern art. Unable to utilize any part of his body below the neck, the wheelchair-bound Phillip needs constant care every day and his outlook on life is looking pretty bleak. Though he is unqualified for the job, Phillip hires Dell because he believes that Dell will not treat him with pity, nor resuscitate him should he stop breathing. Dell moves in with Phillip, under the strict yet caring eye of Phillip’s secretary Yvonne (Nicole Kidman) who disapproves of Dell and gives him a three strikes rule should he fail in caring for Phillip. As time goes on, the two men form an unlikely friendship that will have a lasting impact on both of them.

One can’t help but think of Kevin Hart’s recent remarks made about hosting the Oscars and his thoughts (or lack of action towards) the LGBTQ community while watching “The Upside.” There is a scene played for laughs where Dell must change Phillip’s urinary catheter, which involves touching his “penis,” a word that Dell cannot even seem to say out loud without getting grossed out and an act he cannot commit because it involves one straight man touching another straight man down below, even though Phillip can’t feel it, thus can’t get sexually aroused. It’s tacky, homophobic, and not at all funny given Hart’s recent display of thoughts and actions towards the LGBTQ community. Another moment that hits a little too close to home is when Dell talks about his “past” and how his character would rather “choose to forget about it and move forward” which also bears similar uncomfortable ties to his recent remarks regarding his homophobic jokes from his past and not offering a sincere apology when the time called for it, choosing to move on instead. Even without these cringe-inducing parallels, “The Upside” would still have to deal with criticism for its other lame jokes (some offensive and some simply uninspired), poor digital cinematography and conventional direction provided by Neil Burger.

In terms of the performances, Bryan Cranston is exactly how you would expect him to be, in the role of a grumpy rich disabled man. However, with a script this cliched and direction this routine, his performance will certainly not rank up there with one of his best when all is said and done. It also doesn’t help that the film’s portrayal of this character’s outlook on his condition is offensive when you consider that he’s a rich disabled person and has more opportunities as far as a quality of life is concerned than many others. There is an unneeded subplot involving his wife which is used to justify his outlook on life since the accident, but this feels more like an excuse. And in case anyone is wondering, regarding Cranston’s recent remarks about being an able-bodied actor playing a disabled person, his character is disabled throughout the entire film, thus making the need for an able-bodied person to play the role completely unnecessary and only supported due to the studio’s stubbornness to grant leading roles in films to actual disabled actors. How can we expect disabled actors to gain and notoriety in Hollywood to open up a movie if the opportunity is never given in the first place?

Kevin Hart admittedly does offer a performance that has a bit more depth and humanity than his other outwardly loud and obnoxiously funny performances that he is more commonly known for. But once again, due to recent events and a poor script, it is very hard to give his performance high remarks. Nicole Kidman is a welcome presence in any movie she is a part of (see also her recent work in “Aquaman“), but “The Upside” commits another crime in making her character unmemorable and saddling her with not much to do other than to scold Del and offer warmth for Phillip’s supposedly miserable existence. It also doesn’t help that her relationship with Phillip, her employer, also brings back memories of the Harvey Weinstein sexual harassment scandals, further illuminating much larger issues that go well beyond this film but are unfortunately supported through their portrayal here rather than condemned. Ironically, the Weinstein Company was the original distributor for this film before it declared bankruptcy.

As stated above, nearly every aspect of “The Upside” is tone deaf to a major fault. Hitler jokes, disability jokes and more, make the film feel dated, out of touch, and completely unaware of the larger issues it is touching upon. There’s one scene involving Julianna Margulies and Cranston which is the best scene in the film, but that’s where the praise ends. One of the messages “The Upside” pushes is to see potential in others and encourage it. Taking that positive and upbeat message, I would like to recognize that we have the potential to be better in what projects we choose to write, greenlight and create for a mass audience. I can understand why some general audience members will still respond positively to this movie but that does not mean we cannot still educate them on the issues this movie deliberately and inadvertently touches upon. How they choose to respond then is totally out of our hands but hopefully, the only good thing that will come out of “The Upside” is, it will bring conversations regarding disability in Hollywood, homophobia, sexual harassment, and other systemic issues to the forefront.