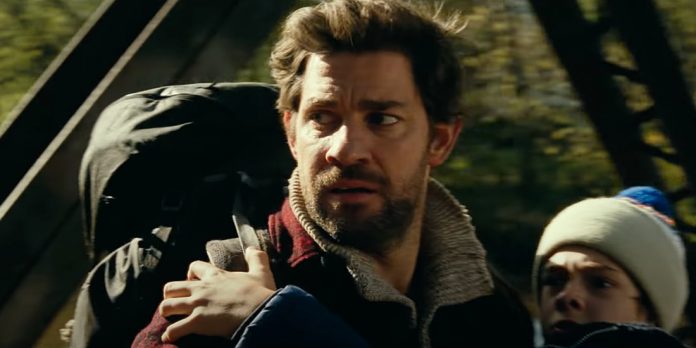 Marco Beltrami has been developing film scores since the 1990’s. Exploding onto the scene with the iconic music for “Scream,” and a 2-time Academy Award nominee for “3:10 To Yuma” and “The Hurt Locker,” his latest film is John Krasinski’s horror hit “A Quiet Place,” for which he received a Golden Globe nomination for. With Oscar voting currently underway for nominations and “A Quiet Place” showing up throughout the guilds, we decided to take a moment to talk to Beltrami about his work on “A Quiet Place.”

​
​So how did you and John come to work together on this project?

I was going to New York to visit my parents and my agent told me to take this script and read it. So I read it on the plane and said ‘wow, this is unlike any script I’ve ever read. There’s like no dialogue in it.” I get off the plane and he says “wanna go upstate and meet them?” I knew they were shooting in upstate New York and when I saw some of the scenes they were shooting and how they brought it to life, I was amazed.

Were there any musical inspirations John particularly wanted you to adhere to?

No, but there was a cover of a David Bowie song, Heroes, by Peter Gabriel that he listened to a lot as he was working on the script and shooting, and that was sort of the first inspiration I had in terms of this movie. It wasn’t so much a horror movie at first as it was creating an emotional background to the family, you know, a family theme. If you can get people invested in the family, then the movie becomes scarier. I think in an abstract way, that’s what my family theme was inspired by. And then we just started sending ideas back and forth on the phone. He was in New York and I was in LA and we talked a lot. Finding common ground is one of the tricky things in the composer-director relationship when you first start working together. You have to work together to come together to find a language and see what works and what doesn’t.

Ultimately, how did you both decide to make a film about silence so music heavily ultimately?

The beginning part of the movie is pretty sparse actually. There are a lot of places in the film that are complete radio silence. I was very conscious that the first goal in this project because it was so well acted and well shot, was just to…not ruin it. To let it breathe and sort of stay out of the well. And I knew that because the film was so quiet, my music was always going to call attention to itself. There are definitely bigger moments later on when the monster is in the picture and stuff. But then there are also some more subdued emotional moments that are more emotional like when John is on top of the silo and he’s making the signal fires or in the truck, pretending to drive, you know, things that sort of bond the family and cement the emotional stakes and sort of invest the audiences in that.

​I know the film is full of sound effects. What did you record beyond the usual strings and piano this time around for your own sound effects?

The piano itself was a little unusual. I wanted to make it almost like the memory of a piano. So I took a piano and de-tuned all the black notes by a tone, so it sounded a little bit off. Besides that, we had two recording sessions where we took orchestral instruments and then manipulated them electronically to come up with much more aggressive and intense sound for the monsters and then used that like elements in the score almost as you would use a sample. So that became a featured part of the sound. The main thing that John wanted was that the creature has a presence almost so that you could almost feel it even if it wasn’t in the room. It was almost like a “Jaws” theme where you hear a little of it and all of the sudden, you’re aware of the creature’s presence. So that was something sonically he tried to accomplish.

We recorded a lot of percussion in this project. There’s a long cue where Emily is down in the flooded basement and the kids are getting attacked in the silo, and there’s a rising shepherd tone that keeps rising and never stops and this big percussive brass and percussion moments that happen behind it…you know it’s a question of upsetting your audience’s sense of rhythm and keeping them on the edge of their seat. Percussion played a big part of that.

Did you have much of an interaction with the film’s sound team overall?

The sound team would send samples of what they were doing to us and we would send music to them. We were working together, and I think one of the great things about this movie is the way it integrates the sound and music as sort of a collaborative work. They work in tandem together and I think it’s better achieved here than in many other pictures where it feels like the music is fighting the sound. The fact that we were of each other as the process was going on really helped.

Ballots are out to voters this week. Is there anything else you’d like Academy voters to know?

I’m proud of the score. I think it functions well. It’s very simple but very effective.

You’ve got a full slate ahead of you it looks like. What projects are on the agenda?

I’ve got “Velvet Buzzsaw” and “Extremely Wicked, Shockingly Evil and Vile” up at Sundance. And I actually just finished a comedic score for a movie called “Flarsky,” which is unusual for me. That comes out next fall. I’m working on the “Ford vs. Ferrari” with James Mangold that’s coming out. I’m really excited about that one. He’s an amazing director.

“A Quiet Place” is currently available on 4K, BluRay and DVD.