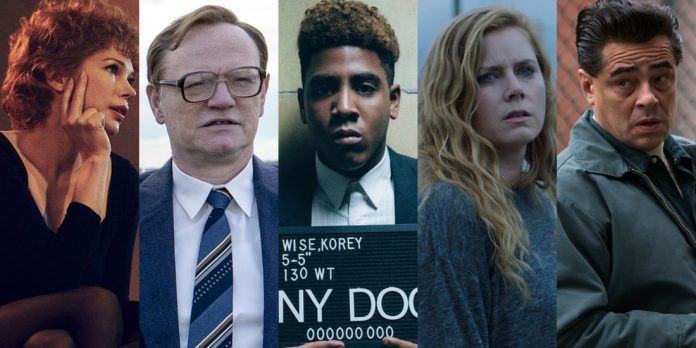 ​Despite my intense studying, following, and analyzing the Emmy awards for the past six years, I have never held the limited series/TV movie categories to the same standard which I do the Drama and Comedy races. When I really began to become invested in the Emmys to a similar degree as my investment in the Oscars and film awards, many called it the “golden age” of television, when “Mad Men,” “Game of Thrones,” “Homeland,” “The Good Wife,” “House of Cards,” “Downton Abbey,” and “Breaking Bad” were all fighting for the golden trophies from the Television Academy at full throttle. Heck, during this time, when Matthew McConaughey and Woody Harrelson’s first season of “True Detective” set the world on fire, HBO made the strategic decision of entering the seven-episode narrative in the Drama series categories, rather than Limited/Miniseries. “True Detective” would have had a guaranteed sweep of every category that year had it proceeded as limited series, instead of only winning the directing achievement in the drama series category. Due to this decision, McConaughey lost to Bryan Cranston in a stunning upset. In my view, HBO made this decision because they didn’t want their prized possession winning the second fiddle, small potatoes, less prestigious categories at the Emmys.

My, how times have changed.

​Even though that “True Detective” 2013-14 cycle was only five years ago, the landscape of television and storytelling has changed drastically. In this Emmy cycle, the limited series categories are more competitive and have more substantial contenders than the drama and comedy series categories, which have been mostly resigned to HBO’s one last hurrah for “Game of Thrones” and “Veep.” The dynamics have shifted so pointedly in this year specifically, though we saw the first hints of this with “Big Little Lies” and “Feud: Bette and Joan” two years ago, where Oscar-winning actors and revered filmmakers made substantial storytelling narratives using this medium as opposed to film.

Many have characterized the trend of limited series storytelling as the way of the future before, and while many of us timidly agreed, I didn’t necessarily believe the change would happen so quickly. More specifically, many projected in the coming years, A-list talent (actors, writers, directors, etc.) would eventually drift to this mode of expanded yet limited storytelling for adult audiences that television and streaming services offered.  I’m going a step farther: this year’s limited series Emmy contenders represent a step which reduces the role of both film traditional drama and comedy series have in prestigious storytelling.

Fifteen years ago, the level of quality in storytelling and artistic skill in shows like “Escape at Dannemora,” “When They See Us,” “Sharp Objects,” “Chernobyl,” “Fosse/Verdon,” “The Act,” “A Very English Scandal,” “True Detective,” “The Hot Zone,” and “Catch-22” would have been reserved for the film industry. And now, they are all on television, or streaming platforms which characterize them as television. If a survey was taken for a consensus among high-information television viewers and critics, I imagine most would agree that a majority of the best shows last year were among the miniseries listed above, and there would be fewer admissions of shows found in the comedy and drama races. At this point, the ten series referenced above could probably rival the eight Best Picture nominees at the Academy Awards last year in terms of the artistic and storytelling quality being produced in the industry.

Securing a spot on the Best Limited Series nomination shortlist this year will be a bloodbath. I’d argue only two shows are really safe: “When They See Us,” due to its buzz hitting at precisely the right time during the voting period, as well as the star power of writer/director Ava DuVernay, Netflix’s aggressive campaigning, and the devastatingly important events it depicts; and “Escape at Dannemora,” which got off to a strong start at the Golden Globes and SAG awards in the winter, has two Academy Award-winning actors headlining the project, and benefits from being Showtime’s only focus in these categories. That last bit is important because compare that to HBO, who is juggling three miniseries in this category. It’s much easier for Showtime to funnel all of its resources into one critically acclaimed show, rather than HBO pushing their three products onto voters at once. Although I’d argue, HBO is supremely more competent at getting their shows nominated and winning at the Emmys than Showtime or anyone else is.

​I’m firmly predicting “Sharp Objects,” too, though some of my colleagues have decided to leave it behind. Yes, it aired long ago and it was didn’t unite viewers in the same way Vallee’s previous miniseries, “Big Little Lies,” did. However, with so many contenders being released at the last minute over the past month, viewers have had time to actually see “Sharp Objects,” and voters typically endorse with what they’ve seen, as long as it’s competent. There’s so much star power behind the limited series, and it’s likely to be nominated in many individual branches across the board. Nominating important people in the entertainment industry makes the Emmys look good: Directors aren’t going to pass up the opportunity to nominate Jean-Marc Vallee, who just won two years ago and this show is even more engineered by the directing; actors won’t pass up the chance to nominate Academy darling Amy Adams and veteran Patricia Clarkson in roles that critics call career highlights for both actresses; writers aren’t going to pass up the opportunity to nominate Gillian Flynn, who is one of the few writers in Hollywood who the general public know by name; and the technical branches are going to overlook it in categories like cinematography, art direction, costumes, editing, sound mixing, sound editing, etc.

“Sharp Objects” may seem easy to take out of the Best Limited Series categories when you see the influx of new, fresh shows hitting the ground right at the moment, while forgetting it will receive support branch-by-branch, has an enormous claim to name recognition, and most voters probably saw it at some point over the past year. HBO is not going to let this one slide, and for all the apathy you hear regarding the show, it does have its passionate supporters, too.

“Chernobyl” has connected with audiences in an intense way, so it’s likely going to be voted in, aided by HBO’s push for it. It is the #1 rated show on IMDb.com, which is really something radical for a show that has barely been airing for a month. My worry for “Chernobyl” is, it’s so newly released that all voters may not have gotten to see it before voting begins, and its overall claim to nominations could be hindered due to the fierce competition of shows with bigger names and that have been around longer. “Fosse/Verdon” will likely round out the category by appealing to the old-school Emmy voter through the fun of the biopic topic, the craft of the period piece, or the big-name stars in Michelle Williams and Sam Rockwell as the title characters. However, we must acknowledge the fact that it is the most poorly reviewed shows of the top five I have predicted so far. “Fosse/Verdon” has a 68 on Metacritic, while “Escape at Dannemora” and “Sharp Objects” have 78, “Chernobyl” has an 83, and “When They See Us” an 87. The common complaint from critics is, how generically it approached a complicated marriage of two complex individuals. But the songs, the costumes, and pizzazz may make voters disregard the criticism.

I see those five as the safe lineup to predict. However, “A Very English Scandal,” which as an 84 on Metacritic, is well established as being among the top contenders, and I predict it’s forced *just* outside of the top five. But really, Stephen Frears’ period piece could be interchangeable with any of the shows above on the right day, at the right time. Emmy voters could opt for it rather than two HBO selections: They could ditch “Chernobyl” if they didn’t have time to see it or “Sharp Objects” if they found it boring. I’d watch out for the better reviewed “A Very English Scandal” to replace “Fosse/Verdon,” if voters felt the latter didn’t live up to the hype and the former fulfills their biographical Emmy bait option better. There’s no doubt, Frears, Grant, and Wishaw will be nominated individually, but it’s really about the luck of the draw at this point in the game.

​The real spoiler I could see upending the entire establishment is “The Hot Zone.” National Geographic managed to get “Genius” nominated with mediocre reviews in years past, and they have been pulling out the big guns with a campaign for the newly released miniseries about the Ebola virus. “The Hot Zone” is timely, has friendly faces of TV (three-time Emmy winner Julianna Margulies), and was smartly structured with distribution and within the campaign. It’s a wild card, but could seriously happen and people will lose their minds on nomination morning.

There are so many options to break into the category, but none that make me confident enough to fully predict them. Mahershala Ali brought “True Detective” back from the dead this year, and his stock has risen since winning his second Oscar this decade. There’s no doubt he will face off against Rockwell for Best Actor, and the show has potential to appeal to voters out of a sense of familiarity, but I think the year has too many strong contenders to go with the “rebound season after a deplorable year” option. “Catch-22” would be an easy option in a weaker year as well, riding on the World War II bait and the impressive cast, including Hugh Laurie, George Clooney, and Kyle Chandler. But it struggled critically too much to be considered safe this year. “The Act” could be a choice popular with mainstream audiences, having come from Hulu, but I think it will have better luck with acting nominations. “Maniac” struggled with the Golden Globe voters, but I wouldn’t be surprised if the Emma Stone and Jonah Hill-lead project were to make an appearance.

What do you think? Which shows will survive and make into the top five slots at the Emmys for Best Limited Series? Do you agree with the view that there is a trend toward high profile filmmakers and actors toward this medium? Will all the talent in the industry flock to television eventually? Let us know in the comments section below or on our Twitter account.