The Next Best Picture Podcast – “Spotlight” 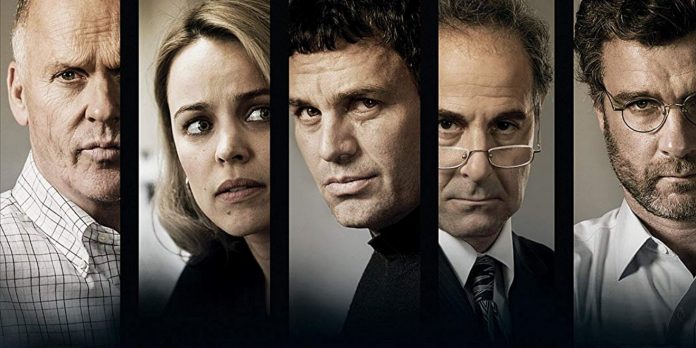 We have now come to the point in our 2015 retrospective review series where we are talking about the Best Picture winner “Spotlight,” which also went on to win the Academy Award for Best Original Screenplay. With a celebrated ensemble cast which includes Michael Keaton, Mark Ruffalo, Rachel McAdams and more, “Spotlight” follows the Boston Globe’s investigative reporter division as they uncovered the Catholic Church priest sex scandal of the early 2000s. Joining me for this 2015 retrospective review I have Josh Parham, Daniel Bayer, and Patreon supporters Jeffrey Kare and Charles Bright.
​
This is a preview of the podcast, the full version of which is only available to those who subscribe to us on Patreon. For the small price of $1 a month, you can receive this review along with other exclusive podcast content, so be sure to subscribe here.
​
Thank you so much for listening. You can subscribe to the Next Best Picture Podcast on SoundCloud, Apple Podcasts, Spotify, Stitcher, GooglePlay, Tunein, PlayerFM, Acast & Castbox or you can listen down below. Please take a moment to review us on Apple Podcasts here. ​​

You can follow Matt, Josh, Dan, Jeffrey & Charles and hear more of their thoughts on the Oscars and Film on Twitter at @NextBestPicture, @JRParham, @dancindanonfilm, @JeffreyKare & @charlesbright