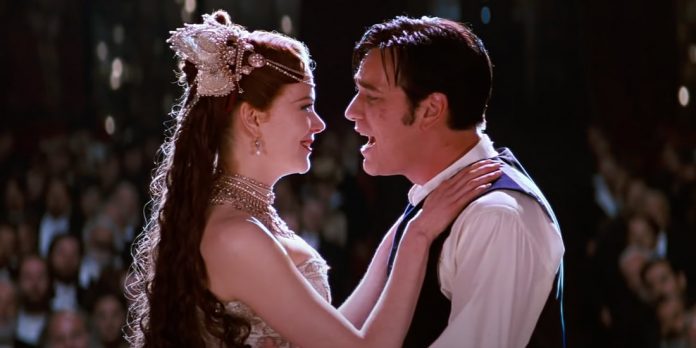 Wherever you find yourself on the Baz Luhrmann scale of love or hate, you are bound to feel something when watching his movies. His glittering filmography is full of so much energy – you can practically hear “More, more, more!” echoing from the visionary’s chair. His films may seem chaotic, but there is a method to the madness. His commitment to the material used is unapologetically rooted in pure emotion and truth. From his sweltering adaptation of the two star-crossed lovers “Romeo + Juliet,” to the spectacular 1890s underworld of the “Moulin Rouge!,” Luhrmann has reached impressive heights. When he’s good, he’s good, but there are the misfires. Take his oversaturated, lukewarm stamp on F. Scott Fitzgerald’s American dream with “The Great Gatsby,” for example. Minding the highs and lows, Luhrmann’s signature voice is imbued with a love of music. Part of what makes his storytelling so invigorating is how certain songs are used to elevate a given moment. In the way a great song can transport you to places you’ve never been, he brings a similar sensation to the screen. In celebration of his upcoming release, “Elvis,” premiering at the 2022 Cannes Film Festival and starring Austin Butler in the title role, here are the top ten musical moments of Baz Luhrmann’s filmography.

This sparkling ’90s dance sequence would be just the beginning of many musical scenes from Luhrmann. Atop the Kendalls’ School of Dance building, free-spirited dancer Scott (Paul Mercurio) and new partner Fran (Tara Morice) practice for the Pan-Pacific ball championship. While forced to pair with a beginner, Fran teaches Scott more than he ever imagined. The two flourish together, and this practice scene is a sweet example. They dance next to a glittering Coca-Cola ad, which gives the moment a burst of color, while Morice and Williams’ version of Cyndi Lauper’s “Time After Time” swells in the background. It’s a classic song choice about not moving forward alone, which mirrors the gift Scott and Fran have found in one another.

The MTV generation was blessed. Imagine the sensation of watching Romeo’s sun-kissed introduction on a big screen as “Talk Show Host” by Radiohead creeps up in the background. The scene is powered by emotion: a moody Leonardo DiCaprio on Verona beach (Luhrmann’s Verona, Italy), glaring at the sight of his parents, who are seen driving past. The teenaged angst! But the scene is so much more than that. Romeo is lost at the beginning of the story, and not until he meets Juliet does he awaken from his gloomy slumber. The misunderstood vibes of his introduction stand out like a sore thumb against the starry-eyed lover he becomes when he and Juliet find each other. As a product of the ’90s, the movie makes the best use of Radiohead’s alternative sound in this scene, which conveys exactly what the lyrics do: “You want me? Come and find me.”

Before their practices begin for the Pan-Pacific ball championship, Scott and Fran share a spontaneous backstage dance to the Doris Day version of “Perhaps, Perhaps, Perhaps.” The precision of this scene emotes a power that the film doesn’t reach anywhere else in its runtime. But even for a brief moment, it’s a simmering dream to watch. It’s the kind of moment between two people when the world melts away, and all that remains are memories. The spontaneity opens up a possibility of partnership, much to the curiosity of fellow competitive dancers who gather around in undeniable reverence. The clarity in Day’s voice brings an irresistible quality to the scene; you can’t help but take a peek from behind the curtain to experience just a sliver of what the two characters are feeling.

This list would be incomplete without a nod to the sparkling diamond of “Moulin Rouge’s” Satine (Nicole Kidman). Her glittery moonlit introduction conveys layers about this character who, existing under the thumb of cabaret host Harold Zigler (Jim Broadbent), has grown accustomed to exploitation for money. Not only does the scene showcase Kidman’s incredible star presence, but it’s a strong example of Luhrmann paying musical homage to icons. It’s a dizzying spin on “Diamonds Are a Girl’s Best Friend,” a song performed by Carol Channing in the 1949 Broadway production of “Gentlemen Prefer Blondes,” then performed by Marilyn Monroe in the 1953 movie adaptation. Plus, bits of Madonna’s smash hit “Material Girl” are sprinkled into the sequence. Icons are everywhere, and Kidman’s Satine joins the club.

You’d think that people would have had enough of silly love songs. But there will always be a place for them. Sometimes, you just want to belt one out. The options to choose from are endless, as Christian (McGregor) and Satine (Kidman) demonstrate in their pop duet, “Elephant Love Medley.” The scene is a delightful jukebox for two, and they do a dance of courting each other with the help of famous lyrics. Working alongside co-screenwriters Luhrmann and Craig Pearce, music supervisor Anton Monsted looked to the classics for inspiration. Songs from The Beatles and David Bowie are showcased, to name a few. “Elephant Love Medley” is a tribute to what many artists have given to the ballad genre. It’s also a toast to the love that seals Christian and Satine’s romance. A dramatic operatic conclusion by Plácido Domingo brings the intensity and raises the anticipation of what is to follow.

With the energy of fireworks, a glittering Mercutio (Harold Perrineau) makes his grand entrance in “Romeo + Juliet.” He rides in with his friends in a red convertible to the backdrop of the disco smash hit, “Young Hearts Run Free” (a song originally recorded by Candi Staton). It’s a song Mercutio would lip-sync to perfection at the Capulet ball. Of course, the Capulet ball is where Romeo meets Juliet, but the moments beforehand give insight into Mercutio’s psyche, showing he is the most interesting character in this Shakespeare tragedy. As the cynic to Romeo’s teenage dreams, Mercutio moves to the melody of the lyrics, “Young hearts, to yourself be true.” A fantastic performance by Perrineau makes the character’s lines sing with an unparalleled passion for self-love. Kym Mazelle’s vocals bring both dreamy magic to the film and a burst of energy for realists.

This song is a journey. Jam-packed with guttural intensity, it’s the embodiment of a rollercoaster ticking away until that first plunge. Up until this sequence, “Moulin Rouge!” basks in the lovebird glow of its two leads. “El Tango De Roxanne” marks a shift in tone. When Satine misses her promised meeting with Christian, he sings of heartbreak at potentially losing her forever. Meanwhile, Satine is trying to break free from The Duke (Richard Roxburgh) once and for all. Co-written by Luhrmann and Craig Pearce, the lyrics interweave growling bellows of jealousy with the ache of lost love. The sequence reimagines the song “Roxanne” by The Police as a thunderous tango, used to frame the film’s climax. Not just lyrically but through dances and vocals. The competing sounds of Jacek Koman’s raspy voice and Ewan McGregor’s softness convey lovers at odds. The quickening violin in the background turns up the volume to the point where their voices are shouting to be heard. Luhrmann conveys the energy of it all, the quickness of the dancers’ feet, and the power of the vocals synonymous with his direction.

“Truth! Beauty! Freedom! Love!” “Moulin Rouge!“ delivers on all exclamations. If there could be one anthem from the boisterous soundtrack to drive the message home, “Come What May” lives up to the challenge. The duet is first performed during a rehearsal scene for “Spectacular, Spectacular” (a.k.a. The Pitch served to The Duke that gets him to invest in the production); giddy sparks fly between Christian and Satine as The Duke annoyingly looks on. The duet is reprised later in the film for the grand finale. The lyrics find Christian and Satine at a whole new level in their romance. The reprised power of this duet calls on both characters to find each other freely, to live truthfully above all else, and choose love until the end of time. “Come What May” delivers on both occasions, tweaked ever so carefully so that it suits what each scene calls for.

Coupled with Luhrmann’s laser focus on devoted infatuation, the entire “I’m Kissing You” sequence is one of the best movie musical moments, period. When Des’ree starts singing this ballad at the Capulet Mansion party in “Romeo + Juliet,” her stunning voice has partygoers at a standstill. The world stops, and the titular star-crossed lovers meet at the fish tank in that lull filled only with a beautiful love song. The song plays at the perfect time; the lyrics reflect their instant chemistry and eventually melt into an orchestral version that plays during their first kiss in an elevator. “I’m Kissing You” becomes Romeo and Juliet’s recurring theme for good reason ­– the song communicates their lovesick longing to the point where you are emotionally invested in following them, even though we all know how their story ends.

“Your Song” is the epitome of a Baz Luhrmann musical number: It is a whimsical feast for the ears and eyes. Luhrmann bows to the heart-swelling power of this song by leaning into McGregor’s gut-wrenching rendition. The moment Christian belts out the opening lyric, whether Satine thinks he is a Duke or not, is suddenly irrelevant. “Your Song” is a stunner, a magical scene of falling uncontrollably in love. It captures the imagined giddiness of being transported to another world, someplace where it is possible to leap from a dazzling elephant room atop the Eiffel tower as stars sparkle, and the moon sings an opera. None of this sounds like it should work, but it does. “Your Song” is an absolute fairytale and the best example of Luhrmann’s unapologetic commitment paying off.

What new musical moments will Baz Luhrmann give us with his upcoming film “Elvis?” What do you think of our list? Is there anything missing you would’ve included? Please let us know in the comments section below or on our Twitter account.