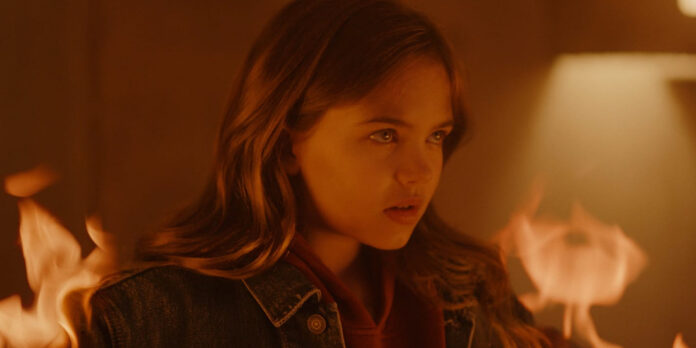 THE STORY – A couple desperately try to hide their daughter, Charlie, from a shadowy federal agency that wants to harness her unprecedented gift for turning fire into a weapon of mass destruction. Her father taught her how to defuse her power, but as Charlie turns 11, the fire becomes harder and harder to control. When a mysterious operative finally finds the family, he tries to seize Charlie once and for all — but she has other plans.

​​​For the last several decades, author Stephen King’s worlds have jumped out of his pages and taken over big and small screens. Adaptations have been critical successes – “Carrie,” “The Shawshank Redemption,” “The Green Mile,” and “Misery” each earned Academy Award nominations (and a Best Actress win for Kathy Bates) – and have made their mark at the box office – the “It” remake in 2017 made over $700 million.

But not every King adaptation is a success, and the newest remake of “Firestarter” falls flat in almost every way. Scott Teems’ script rushes through the story and glosses over everything that would interest viewers the most. Rather than improve on the 1984 attempt at telling the story, which currently has a 37% on Rotten Tomatoes, this remake manages to score even lower.

The film opens with a heartwarming, tender feeding scene between baby Charlie and her mother, Vicky (Sydney Lemmon). Father Andy (Zac Efron) looks on lovingly at his two girls. As they put their infant to rest in her crib, Andy senses something is wrong. Sure enough, when he checks back on Charlie, her mobile, dangling above her, is on fire.

We soon learn that Charlie (later played by Ryan Kiera Armstrong) can start things on fire with her mind. Her parents also have powers of their own: Andy can control people’s minds, which he uses to help people quit smoking and get some quick cash, while Vicky chooses to suppress her telekinesis ability. However, they have to be careful with their powers, as “The Shop,” an organization that gave them their powers through a drug experiment, is after them. But that proves to be a challenge because Charlie doesn’t know how to control her deadly power and begins to act out and draw attention to herself at school.

At this point in the story, the viewer would likely be most interested in learning about how these three, especially Andy and Vicky, gained their powers, but the film moves past it very quickly. We’re only given an opening credits-length insight into the experiments the parents underwent when they were in college. It definitely is the most intriguing part as it’s shown via. grainy interviews with experimenters, but also most frustrating since that’s all we get that sparks any intrigue in the film.

Once the family’s cover is blown following an explosive incident at Charlie’s school, a mysterious and dangerous man named Rainbird (Michael Greyeyes) – who we, again, don’t learn anything about – is sent to find the family. What follows is a very lackluster fight sequence between him and Vicky, and later another uninspired scene between him, Andy, and Charlie. The rest of the film follows in a similar fashion as Andy and Charlie go on the run, and they later come face-to-face with The Shop. It ends up playing out in a very by-the-numbers way, with no creativity or surprises in store.

With such a lackluster script presented to them, Armstrong, Efron, and Lemmon do what they can to portray these extraordinary people. However, there is very little in these characters that will pull audiences to them. Not to mention, there is barely any love or affection shown between this family unit. The script also doesn’t seem to know what kind of film it wants to be. There are no scary elements to make it a horror film; there’s certainly nothing that thrilling going on from start to finish, and at times it makes you wonder if it’s supposed to be a superhero/villain origin story. It just seems like the film was thrown together hastily without much rhyme or reason.

Just when audiences thought the original “Firestarter” was as lackluster as it could get, in comes the 2022 remake to take its place. It’s a shame, too, since there is precedent for a film about a young girl with extraordinary abilities to be spectacular (“Carrie”). Instead, the newest “Firestarter” lacks creativity and risk-taking with its storytelling, and it completely blows past elements that would suck viewers into the film. While the cast does what they can with their characters, not even they can save this movie from fizzling out.