“THE TALE OF KING CRAB” 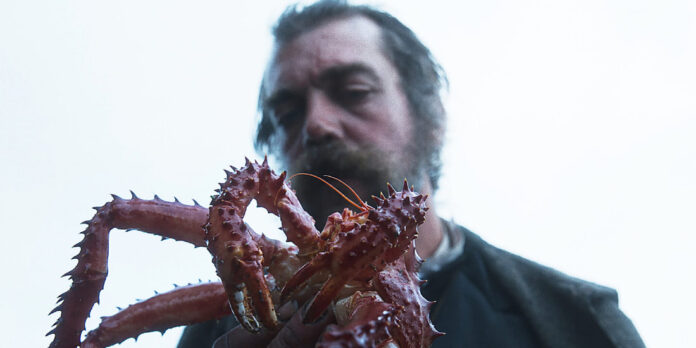 THE STORY – In the 19th century, a wandering drunkard in Italy is cast out of his village for a crime. He is exiled to Tierra del Fuego, where he searches for a mythical treasure, paving his way toward redemption.
​
THE CAST – Gabriele Silli, Maria Alexandra Lungu & Ercole Colnago​

​Directors Alessio Rigo de Righi and Matteo Zoppis are interested in legends and outsiders. Following their 2015 documentary “Il Solengo,” which chronicles the life of a hermit, they have returned for their narrative feature debut, “The Tale of King Crab,” which played at last year’s Cannes and New York Film Festival. The film takes place in the late-19th century, as we watch the wandering drunkard Luciano’s (Gabriele Silli) legend unfold across two continents.

The film begins with and occasionally returns to a group of older Italian hunters in modern times eating dinner and telling the “dark tale” of Luciano. It’s a legend of a man who was the subject of many rumors, and even the men telling the tale aren’t aware of what is fact or fiction. Their story is divided into two sections: a pastoral tale of forbidden love and a more fantastical hunt for treasure. The first half, set in the Italian countryside, serves as a prologue for the later action but takes up a significant amount of the film’s modest runtime. Luciano is the son of a doctor, giving him privilege above the peasants he is surrounded by, but he struggles with alcoholism and (if the rumors are to be believed) madness. He is involved with a young woman Emma (Maria Alexandra Lungu), but her shepherd father, Severino (Severino Sperandio), disapproves of their match. Luciano also has angered the local prince (Enzo Cucchi) by breaking the locked doors on a path he believes the people should have the right to traverse. All of this results in him being extradited from Italy, and we next see him in Argentina, posing as a priest and following a crab who will supposedly lead him to treasure. This second half of the film resembles more of a Western, particularly in its climactic shoot-out scene.

Silli is a writer and director making his acting debut in the film, and from this perspective, his performance as Luciano is even more impressive. It’s highly naturalistic in its execution but with a compelling physical presence to boot. However, the character himself isn’t engaging enough to sustain the film’s story, and his development sometimes feels erratic. We’re given minimal insight into motivations, and the dramatic shift from the first to the second chapter occurs without explanation. The film’s saving grace is how beautiful it is, primarily due to the gorgeous scenery as it was shot on location in Italy. It manages to reflect a sense of magical realism while still feeling rooted in its time period and setting. There is a specific quality to the filmmaking that lends itself to feeling like a film shot in the 70s or 80s as opposed to the 21st century. Cinematographer Simone D’Arcangelo makes particularly good use of water, with several shots of light sparkling off of bodies of water which are visually appealing.

Unfortunately, the film’s beauty cannot make up for how unengaging and disjointed the narrative is. The plot is confusing at times because of how little is explained to the audience and doesn’t delve far enough into its themes of legend and folk tales to make any sort of revelations about the topic. While “The Tale of King Crab’s” visuals are all style with very little substance, Alessio Righi and Zoppis do show some promise as narrative feature directors.