“THE SHADOW OF VIOLENCE” 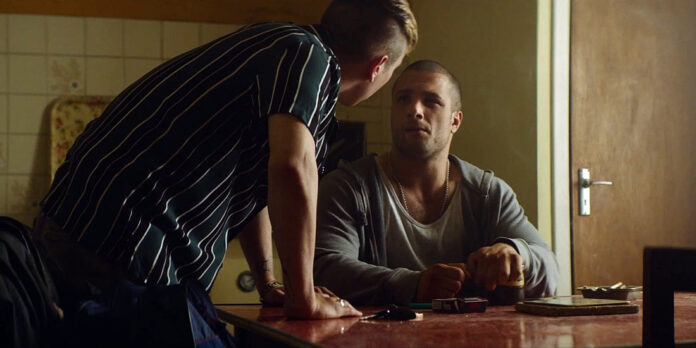 ​​The world may be going through unprecedented events these days, but some things remain a constant: No matter how much we all seem to be existing in a new reality, the steady stream of films about British gangsters will always be there. There’s plenty of variety to choose from, with one released earlier this year called “Villain”. However, “The Shadow of Violence” chooses to take a slight deviation and cross the border into Ireland. While the setting may have changed, it’s unfortunate that little else did, despite an impressive performance at the center.

The central character here is Douglas ‘Arm’ Armstrong (Cosmo Jarvis). He’s a former boxer turned low-level criminal that has ingratiated himself into the Devers clan, a family of nefarious drug dealers in the quiet Irish town. Arm’s closest confidant is Dympna (Barry Keoghan), a brash young man who carries the burden of seeking approval from his more senior family members and often directs Arm to the more insidious activities. Arm tolerates most of this so he can provide support to his partner Ursula (Niamh Algar) and their autistic son, even though their relationship is strained. However, he eventually finds himself at a crossroads when he may not be able to complete a particularly violent task. This leads to severe consequences he must face if he is ever to find solace for him and his family.

As mentioned before, this has become a very familiar subgenre that has seen its fair share of variations. While the setting may have changed from the urban London streets to a somber Irish landscape, the elements are largely the same, and not much is done to truly innovate. To his credit, there are moments where director Nick Rowland showcases skill at creating tension that keeps the audience invested, but they’re few and far between the more pedestrian exchanges. His directorial efforts are mostly sufficient, though the lack of anything extraordinary on display often contributes to the lagging pace the film suffers from. Overall, the filmmaking isn’t terrible, but it also doesn’t compensate for the failings within the story.

Such failings are harshly felt within Joseph Murtagh’s screenplay. It’s unfortunately riddled with shallow characters and weak dialogue, all wrapped within a mediocre premise that comes across as quite stale. To be fair, there’s a somewhat interesting character study at the center here. The portrait of a man who lost out on the potential of his youth and is trapped fleeing toward one desperate situation after another is a compelling notion. Unfortunately, little in the script contributes toward making this story interesting, and the portrayals of these players offer little nuance in their standard archetypes. These shortcomings are compounded even further once the third act begins to unravel and concludes with a poorly executed anti-climax.

While much of the film fails to be captivating, the performance from Jarvis almost single-handedly saves it. It’s another element that finds itself operating in similar modes that have come before, particularly when it comes to the quiet but brutal gangster. However, Jarvis manages to still find layers of depth within this character. There’s a harsh yet effective charm he radiates that makes him an oddly alluring screen presence. At the same time, he’s able to convey such internalized emotions that bring a complexity here that’s greatly appreciated. It becomes astoundingly clear that Jarvis carries much of the film on his shoulders, and it’s not solely because he plays the protagonist. He truly offers an interesting and surprisingly emotional performance that more than makes up for some of the shallowness as written.

It’s a shame that such compliments are not widely distributed amongst the supporting cast. Keoghan is probably the most recognizable out of this bunch but delivers an underwhelming performance. It’s a particular disappointment given how well he has been in previous work, but his presence here never creates a compelling persona despite very few occasions where his natural charisma peaks through the dull surface. Algar does her best to carry a good deal of emotional weight of her own and actually delivers an impressive turn. Sadly, she’s saddled with a character that isn’t that developed so her impact is limited. This is true for so many others in the ensemble. Nobody ever really strikes a false note, but none get to reach the emotional depths of the central role due to the ill-defined nature of their characters.

Despite the laudable performance from Jarvis, there aren’t too many other elements that are worthy of significant praise. There are moments of finely crafted tension and some supporting players manage to hold their own, but what befalls “The Shadow of Violence” are the same deficiencies that have come to many of its kind before. This story just doesn’t feature much innovation in its execution, and it leads to shallow characters and a mostly uninteresting premise to explore. Everyone knows that this won’t be the last foray into the world of gangsters in this type of setting, and if anything may be given to its credit, it’s far from the worst. However, there are still intriguing avenues to take that this effort mostly finds itself avoiding.