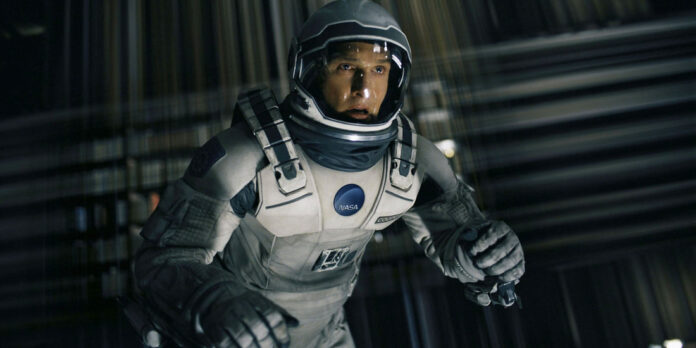 THE STORY – In Earth’s future, a global crop blight and second Dust Bowl are slowly rendering the planet uninhabitable. Professor Brand (Michael Caine), a brilliant NASA physicist, is working on plans to save mankind by transporting Earth’s population to a new home via a wormhole. But first, Brand must send former NASA pilot Cooper (Matthew McConaughey) and a team of researchers through the wormhole and across the galaxy to find out which of three planets could be mankind’s new home.
​
THE CAST – Matthew McConaughey, Anne Hathaway, Jessica Chastain, Bill Irwin, Ellen Burstyn & Michael Caine

​​​For better or worse, there is something incredibly unique regarding a filmmaker like Christopher Nolan. He’s had a steady and consistent fanbase for some time now, but “The Dark Knight” is what catapulted him into another plane of appreciation for many dedicated cinephiles. As such, his films have often garnered acclaim along with an aggressive set of defenders. However, the reception to Nolan’s 2014 science-fiction epic “Interstellar” was received in a much different fashion. The critical consensus at the time was far more mixed, but divisiveness has only helped to keep the film in the conversation after all these years. Whether a passionate defender or detractor, it has remained one of the most discussed films of the decade and for good reason. While not all-together perfect, the film represents a monumental cinematic achievement that deserves to be placed high within the caliber of Nolan’s filmography.

“Interstellar” takes place in a dystopian future where things are looking quite dire on Earth. Vegetation is producing fewer crops with each passing year and the land is quickly turning into giant swaths of dust that cover entire landscapes. Human life is racing toward extinction, though Cooper (Matthew McConaughey) does his best to support his family on his own farm. However, a serious of unusual phenomenon lead him and his daughter Murph (Mackenzie Foy) to discovering the now-secret operations of NASA. The goal of this organization is to investigate a set of planets hidden through a wormhole that hopefully will be a new world to move all of the world’s population to before it is too late. The higher-ups manage to convince Cooper to join their expedition, a perilous journey that will end up crossing through time and space and eventually a revelation about the true purpose of life.

Such a brief synopsis doesn’t do justice to all that’s packed into the story here. At times, it does seem like it’s filled to the brim with so much thematic weight and plot mechanics that it can come across as ungainly and messy. However, its ambition is precisely what makes it so engaging. Nolan’s precision as a filmmaker shines through once again, showcasing a vast world with a truly awe-inspiring spectacle. The grandiosity of the filmmaking is a highlight that utilizes the impressive cinematography, production design, and visual effects to create some thrilling sequences, particularly in the masterful ways in which practical effects are prioritized. An important element as well is Hans Zimmer’s mesmerizing score that helps to sell so much of the emotional impact.

That emotional connection is also what sets this apart from most of Nolan’s filmography. For as celebrated as he is, a common criticism is that his controlled direction often suffocates the real humanity in his stories and what’s left can be appreciated from a cold distance. There is nothing that can be labeled as lacking in emotion here. The film boldly wears its heart on its sleeves, and for as much as it accomplishes to convey the operatic scale of this space odyssey, it also manages to communicate an intimate familial drama that stretches through layers of time. It could come across as melodramatic for some, but it perfectly captures the tone of the piece. That poignant journey is a great asset that keeps the film endearing on a very rewarding level.

At the same time, the film isn’t without its flaws, and most of that is buried within the screenplay that Nolan co-wrote with his brother Jonathan, a frequent collaborator. While the script serves as the foundation of a rich tapestry of resonating emotional themes, it does feature moments that convey wooden dialogue and some illogical leaps that complicate the organization. It also features scenes that can come across as overstuffed. It would be false to say that these elements never impede the film, particularly in its pacing near the beginning. At the same time, there is still a level of craft given to the scope of this story, and to disregard the totality of its commentary regarding connections of love, science and humanity would be a disservice as well. The screenplay here is far from perfect, but it provides the structure for so much of the other assets the film utilizes beautifully.

What is also well employed is a well-rounded ensemble who all deliver excellent performances. McConaughey provides such an anchor to the film that immediately creates an endearing bond that solidifies itself as one of the best of his career. He maintains the same level of swagger and charm while also showcasing some incredibly heartbreaking moments. McKenzie Foy is also a standout amongst the supporting cast as she manages to provide just as much of an emotional resonance that is even more impressive from such a young performer. There are also notable turns from the likes of Jessica Chastain, Anne Hathaway, Casey Affleck, and the Nolan stalwart Michael Caine. Admittedly, some of these actors inhabit characters that get more material to dive into than others, but all of them provide performances that are fascinating to watch unfold.

“Interstellar” is a film that has all sorts of imperfections that one will either fully accept or dismiss. For as much good there is on display, the faults of the screenplay do rear up enough to be a consistent issue to keep it away from complete mastery. However, the magnitude of all the other elements that work so well in this film does a great deal to compensate for what’s lacking on the page. There is still a great group of actors all delivering effective performances and Christopher Nolan continues to showcase a level of cinematic artistry that is compelling in its ambitions. All of this is enhanced by a story that connects such rich emotional themes to grandiose philosophical commentaries that are staples of the genre. Of course, not all will agree with this assessment. However, that is exactly the most endearing part of this film’s legacy. It continues to inspire conversation years after its initial release and that is a mark of a film with considerable value.​