“THE SECRET LIFE OF PETS” 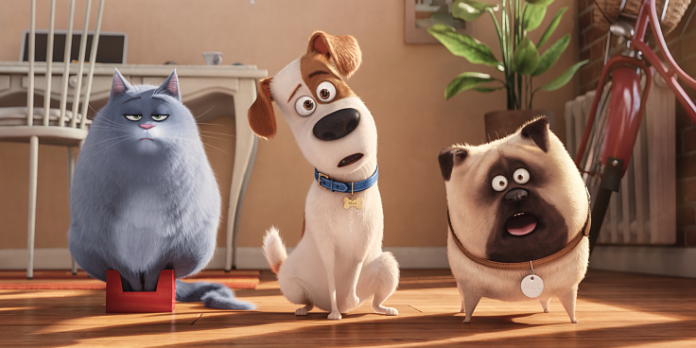 THE STORY – Max (Louis C.K.) is a spoiled terrier who enjoys a comfortable life in a New York building until his owner adopts Duke, a giant and unruly canine. During their walk outside, they encounter a group of ferocious alley cats and wind up in a truck that’s bound for the pound. Luckily, a rebellious bunny named Snowball swoops in to save the doggy duo from captivity. In exchange, Snowball demands that Max and Duke join his gang of abandoned pets on a mission against the humans who’ve done them wrong.
​
THE CAST – Louis C.K., Eric Stonestreet, Kevin Hart, Steve Coogan, Elie Kemper, Bobby Moynihan, Lake Bell, Dana Carvey, Hannibal Buress, Jenny Slate & Albert Brooks

“The Secret Life Of Pets” wants to be “Toy Story” meets “Zootopia.” Illumination Entertainment wants to show us what happens with our pets when we leave home for the day. However, the answers are not as captivating as one would have hoped. While children will most certainly get a kick out of the potty humor, the eccentric voice acting and overall cuteness of the film’s character animations, adults will be left with an empty and shallow film that doesn’t even come close to offering the level of depth found within not only Disney but Dreamworks Animation films.

​Taking place in New York City, Max (Louis C.K.) is a loved terrier dog who has the best relationship with his owner Katie (Ellie Kemper). However, that relationship is disrupted when she unexpectedly brings home a homeless large Newfoundland dog named Duke (Eric Stonestreet). The two immediately don’t get along as Max feels his position within Katie’s life is threatened by the new dog’s arrival. he hatches a plan to get rid of him when they both unexpectedly find themselves outside of their apartment and stranded without their owner. They are found and rescued by a maniacal bunny named Snowball (Kevin Hart) who has made it his personal mission to strike back at the human population who have done wrong by their pets. With the help of Gidget (Jenny Slate), who is smitten with Max, and a few of their friends, the two dogs set off to find their way back home to Katie.

If you allow it, “The Secret Life Of Pets” can be an enjoyable time at the cinema. It made me giggle and chuckle on more than one occasion. My delight towards the film’s humor, however, can mostly be attributed towards my relationship with my own pet. For those who do not have their own pets, I cannot see how they will find much to relate to in this film. Most of the jokes stem from the point of view of the animals who are left alone when their owners leave home for the day and even then, the jokes are mostly directed towards children without a hint of targeting the adult audiences who must take their children to see this film. There is only one moment towards the film’s end where the status of Duke’s previous owner is brought up and it’s here where you think the film is going to head into some dramatic territory and make a commentary on the relationship between owner and pet. But the film quickly glosses over this development and takes the easy way out, paving the way for a light-hearted film without many takeaways or emotional depth.

At least the voice acting is top notch. Louis C.K. does a good job bringing Max to life and Kevin Hart steals the show as Snowball, the renegade white rabbit who leads an underground society of homeless pets. Eric Stonestreet and Jenny Slate turn in memorable turns as the two animals who form the closest bonds with Max, while everyone else is merely serviceable. The animation is some of the best that Illumination Entertainment has done yet, but they are still not at the same level of Disney or Dreamworks yet, even though their designs create some of the cutest nonhuman creatures around.

There is a line that Kevin Hart’s Snowball character says in the film after he hears a story from Max and Duke saying “Well that story bored me to death.” And that exactly sums up how I feel about “The Secret Life Of Pets.” It’s a well-intentioned, competently made film that will appeal to younger audiences and leave adult audiences wanting more. There is no true laugh out loud moments, although there are some varying degrees of humor involved. And most importantly, the storytelling is inconsistent as we don’t know early on who should have our sympathy and why we should care about the story in general. “The Secret Life Of Pets” is one of those movies where all of the best parts are in the trailer which you can watch down below. If you have kids, feel free to take them and take a nap.