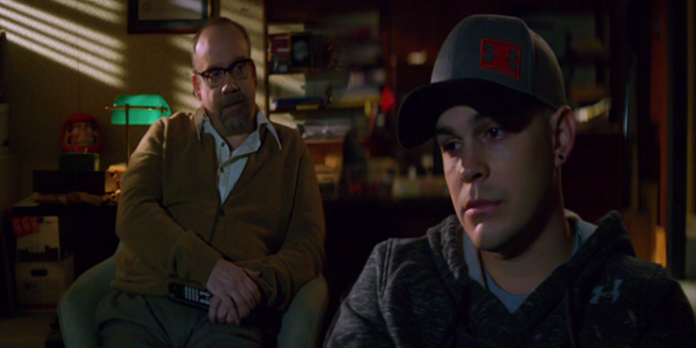 A phenom is described as an individual who is incredibly gifted or admired, especially an up and comer such as Hopper Gibson who in writer/director Noah Buschel’s film “The Phenom” is talented from an early age and has extraordinary expectation placed upon him to perform to the highest level of his abilities. However, this film is not so much about baseball as it is about the psychological trauma and after effects an abusive father can have on his son. “The Phenom” is interested in exploring dark aspects of the human psyche through memory and paints a vivid picture of its character’s thoughts and behaviors for film fans to fascinate over and explore. Noah Buschel’s film may frustrate many viewers but you cannot deny the power on display in this little indie film.
​
Hopper Gibson (Johnny Simmons) has been a gifted pitcher from an early age. He has finally made it to the Major Leagues where he has all of a sudden hit a slump where he’s throwing wild pitches and embarrassing himself for millions of people to see. With a lot of money invested in this young rookie, he is sent to a sports therapist named Dr. Mobley (Paul Giamatti). Hopper needs to get his head back into the game, but the memories of his abusive father (Ethan Hawke) who pushed his son towards greatness in his own way, constantly keeps getting in the way of Hopper forging his own destiny.

Noah Buschel is concerned with some thematically complex ideas within “The Phenom.” The first thing that sticks out to the viewer is how unconventional this movie is. The music choices, the shot selection, the editing (Especially in regards to the film’s ending) and the story itself, defies convention and sometimes succeeds and sometimes does not. The film is constantly fascinating in how it examines the pressure put on one’s self by everyone else’s expectation of you. When your whole life has been built around this idea that you are gifted and the best in your field and then you throw millions of dollars into the mix, what does that do to an individual? Buschel wants to not only explore this but also wants to explore how parental abuse (Emotionally and physically) plays into this mentality that Hopper experiences throughout the film.

Constantly sizing up everyone around him much in the same way his father always did to him, Johnny Simmons is completely convincing as the quiet, yet tortured baseball prodigy who is constantly struggling with the pressures of being a professional athlete. Paul Giamatti provides the right level of warmth and wisdom as the psychologist hoping to understand the struggling pitcher. But it is Ethan Hawke who lights up the screen as Hopper’s abusive father every time he appears much in the same way J.K. Simmons did in “Whiplash.” As the film moves forward and reaches its thought provoking climax, you finally realize that the film is not so much only about Hopper, but it’s also about Hopper Sr’s. emotional psyche as well.

While “The Phenom” will irk more than it satisfies, it will provide for a lot of thoughtful conversation surrounding psychological abuse and self-inflicted pressure. There are many artful shots and choices made by Noah Buschel which will excite and baffle audiences throughout. There is also a side romance between Hopper and his girlfriend Dorothy (Sophie Kennedy Clark) which feels a little forced but still manages to highlight the film’s layered themes. Luckily, those deep themes and powerful performances of its cast keep “The Phenom” from striking out completely.