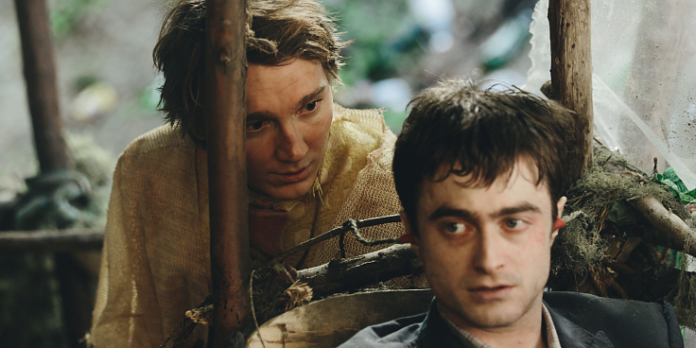 THE STORY – Being stranded on a deserted island leaves young Hank (Paul Dano) bored, lonely and without hope. As a rope hangs around his neck, Hank prepares to end it all, until he suddenly spots a man (Daniel Radcliffe) laying by the shore. Unfortunately, he is dead and quite flatulent. Using the gassy body to his advantage, Hank miraculously makes it back to the mainland. However, he now finds himself lost in the wilderness, and dragging the talking corpse named Manny along for the adventure.
​
THE CAST – Paul Dano, Daniel Radcliffe & Mary Elizabeth Winstead

​”Swiss Army Man” is one of the most bizarre, original and beautiful films I have ever seen. It’s committed performances from Paul Dano and Daniel Radcliffe does wonders to suck you into the film’s maddening premise. If by the time the main title appears on the screen you are not already bought into the overall premise of the film, I would urge you to give it some time for “Swiss Army Man” to fully reveal itself as one of the most poignant and celebratory film of the year concerning what it means to be human.
​
​Hank (Paul Dano) is stranded on a deserted island and has lost all hope. Right before he is about to kill himself, he see’s a man (Daniel Radcliffe) washed up on shore. Upon inspection, Hank realizes that the man is already dead and is continuously farting. Using this to his advantage, Hank rides the dead man across the water, using his farts as a force to propel themselves to a larger island filled with sustenance. Not sure as to how long they will be on this larger island before being rescued, Hank learns that the dead man’s name is Manny  and that he may not be as dead as he appears. Together the two form a relationship in the wilderness, separated from society, that will change both of their lives.

This is one absurdly ridiculous film. However, Paul Dano and Daniel Radcliffe embrace the bizarre nature of the film and turn in two very dedicated performances that are all in service to the message of the film. Our society is slowly killing us because there are societal norms and expectations over how we should behave and express our emotions  to others. “Why do we have to hide our thoughts?” Manny asks Hank at one point in the film. Hank does not have a good answer other than to say “it’s weird” or “because that’s just what people do.” Life is short, and you need to take risks and accept whatever joy or heartbreak those experiences offer you. There are some questionable thoughts concerning the nature of stalking someone, which is brought up later on, but writers/directors the Daniels are not being creeps with this subplot. Instead, they are commenting on how stalking is one of the effects of the loneliness that society impacts upon one’s self. Manny has already died, but he is reborn and re-educated by Hank to understand the ways of the world and how we suppress our basic human urges of truth, love, joy and a few sexual thoughts. By talking about his own feelings towards this, he gets Hank to confront his own personal demons of loneliness, fear and self-loathing. At one point in the film, it is said that “We’re all scared and we’re all a little ugly and it only takes one person to be ok with that.” Their conversations revolve around discussions about girls, masturbation, and death, and it’s  one of best relationships between two characters I have ever seen in any movie.

The Daniels creates a magical film filled with some lively and propulsive montages set to an atmospheric indie rock soundtrack by Andy Hull and Robert McDowell. The origin of the score starts onscreen between the characters talking or humming to themselves and grows to fill the film with a liveliness and energy that is absorbing. The editing of the film is perfectly paced as well, even as the film heads into its final act where you fear that the film might fall off the rails and not stick the landing with its ending. But the Daniels, are committed to their vision all the way through to the end, leaving on a high note that will hopefully have audiences grinning from ear to ear.

Now, some audiences may not be grinning ear to ear. In fact, there were quite a few reported walkouts at Sundance earlier this year and there was even a walk out or two during my screening of the film. Fart jokes, a dead man’s erected penis and a truly odd premise, all contribute towards audiences making their own minds up about the movie before giving it a chance to wash over them. It’s a shame really. Because “Swiss Army Man” is one of the most thoughtful, effective and beautiful films I have seen in quite some time. It’s proof that no matter how ridiculous, you can always find beauty in cinema. In the controlled hands of the Daniels, it’s one of the year’s best.