The Race Has Only Just Begun – Chastain vs. Stewart 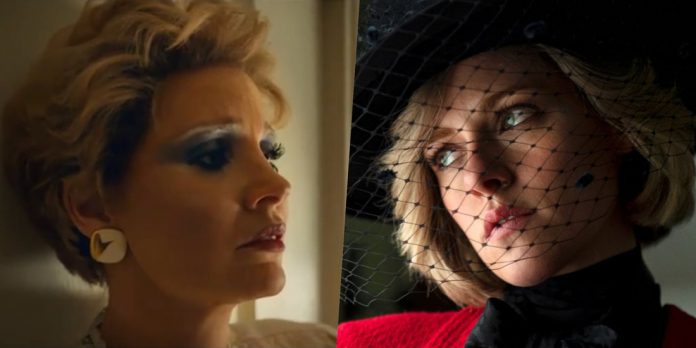 Yes, I am aware that it is September, and some would consider it “too early” to discuss this topic, but after the Venice, Telluride, and Toronto Film Festivals, Oscar pundits finally got to see some of the anticipated films of the season. This means we finally know some of these films are legitimate Oscar contenders. After the last few weeks, it is apparent that we may possibly have a major race in one of the top categories: Best Actress, between former Academy Award nominee Jessica Chastain for “The Eyes Of Tammy Faye” and seeking her first nomination, Kristen Stewart for “Spencer.”

Chastain, a previous nominee at the Oscars (for Best Supporting Actress in 2011 for “The Help” and Best Actress in 2012 for “Zero Dark Thirty”), is starring in the titular role in “The Eyes Of Tammy Faye,” the biopic centered on the evangelical television host. Since the first trailer, critics noticed that Chastain was providing a potentially transformational career-best performance. In addition, she also had two other projects premiering at the subsequent festivals (HBO’s “Scenes from a Marriage” premiered at Venice and “The Forgiven” premiered at TIFF). And to add more coins to the table, Chastain was also the recipient of the TIFF Tribute Actor Award. It was clear that the month of September belonged to Chastain, and for an experienced actor with two Oscar nominations under her belt, it is apparent that she is here to stay throughout the rest of the awards season, even if her film didn’t do financially well at the box office.

On the other hand, Kristen Stewart stars as Princess Diana in Pablo Larraín’s “Spencer.” The film, which is said to be a mix of biopic and nightmarish ghost story, chronicles a weekend in the Princess’s life in 1991. During the days that led up to “Spencer’s” premiere, it was evident that the film’s stars were both Stewart and director Larraín. Known for his untraditional biopics, Larraín scored Natalie Portman a Best Actress nomination for her portrayal in “Jackie” back in 2016. However, despite being highly praised as one of the year’s best films, the film was only nominated for three Oscars (Best Actress, Best Costume Design, and Best Original Score), and winning none on the night. But at the Venice premiere, “Spencer” was given nothing but enthusiastic praise for Stewart as well as Larraín. Both artists have generated a massive fanbase over the last decade for their work, and since the first trailer and subsequent reactions from Venice, Telluride, and most recently TIFF, it seems that “Spencer” is also in the Oscar race for the long haul. This means that at this stage, if we’re going to have a showdown for Best Actress this year, it’s most likely going to be between these two.

Interestingly, Chastain and Stewart both have very strong attributes, which could easily translate to an Oscar win for either performer. Both are playing real people (which has been proven time and time again to be favorable in the acting branch), which requires a form of transformation. On the one hand, Chastain is covered in heavy makeup and is at times unrecognizable as she ages throughout the film. While Stewart, who spent much less time in the makeup chair, still looks fantastic and disappears into the role of the late Princess, donning a British accent and taking on a more internally complex journey through her character’s emotional state.

Also, where one actress ‘falls short’ in her campaign, she makes up for it in another area. For example, Stewart has never been nominated for an Oscar before; therefore, it is more critical that “Spencer” is loved as a whole rather than just her performance for her to win. Luckily for her, she’s in a Pablo Larraín film. Larraín can easily be the director that the Academy feels has paid his dues enough and is ready to receive his first Best Director nomination (especially since he didn’t receive one for “Jackie“). It is also important to mention that “Spencer” also stars Sally Hawkins (a previous nominee), was written by Steven Knight (a previous nominee), with music by Jonny Greenwood (a previous nominee), and was designed by Guy Hendrix Dyas (a previous nominee). It is also shot by Claire Mathon, who was the director of photography for “Portrait of a Lady on Fire.” So even though, on paper, Stewart doesn’t have the advantage of being a previous nominee, she is center stage in a powerful film with Academy-friendly names that is centered around a woman that the entire world loved and still does (see Netflix’s Emmy-winning show “The Crown” for evidence of this). Also, Stewart won a César award in 2014 for Best Supporting Actress for “Clouds of Sils Maria” and is the first and currently only American to win the award. So, if she can win a César without a home-field advantage, I would say her Oscar prospects are still looking strong.

But again, “Spencer” is not a conventional biopic which is not typically something the Academy favors. This is where Chastain comes back in. “The Eyes Of Tammy Faye” is the more traditional biopic that chronicles the rise and fall of a familiar face that was once covered in scandal (think Margot Robbie in “I, Tonya“). This type of formula has been successful in the past with audiences and has been proven time and time again to be popular among Oscar voters in the acting branch. They love to see an actor go under an intense transformation, and there is no doubt that Chastain does in “The Eyes Of Tammy Faye.” She is under intense makeup, performs with an accent, sings, and plays Tammy from her college years to her mid-50s (Chastain has also been trying to make this film for ten years as a producer, which could also help her narrative). Plus, Tammy Faye’s world is presented lavishly with lots of makeup, period production design, and costumes. All of these elements lend themselves to be Academy-friendly in those departments as well. But, the early September release can be detrimental as new films will be coming out weekend after weekend for the next three months, pushing “The Eyes Of Tammy Faye” further out of the conversation (“Spencer” is currently slated for a November release). Such an early release date, unfortunately, makes the film as a whole weaker. Still, a powerful acting performance from a previous nominee should be able to handle the long time season ahead (think Renée Zellweger in “Judy“). And since she is a previous nominee in an Academy-friendly role, Chastain can still win as either a lone nominee or alone above-the-line nominee if she has to (a corresponding makeup nomination at the very least seems inevitable).

At this point in the race, the possibilities are still endless. There is a world where Stewart only wins critics’ awards, and Chastain sweeps the televised awards, landing her the Oscar. But, there is also a world where “Spencer” lands Best Picture and Director nominations which pushes Stewart ahead of Chastain. There is also a world where Stewart and Chastain divide all the awards, and it then becomes a question of which performance the Academy prefers and which woman had the better campaign? Or maybe, someone else comes along and breaks up this race we have at this current time. So much can (and will) happen between now and Oscar voting, but it looks pretty likely that we will have an exciting Best Actress race (again) this year.

Have you seen either “The Eyes Of Tammy Faye” or “Spencer” yet? If so, who do you think deserves to win Best Actress between Jessica Chastain and Kristen Stewart? Do you feel it will be someone else? Let us know in the comments section below or on our Twitter account.