The Probability Of Three supporting Actor Nominations For The Same Film 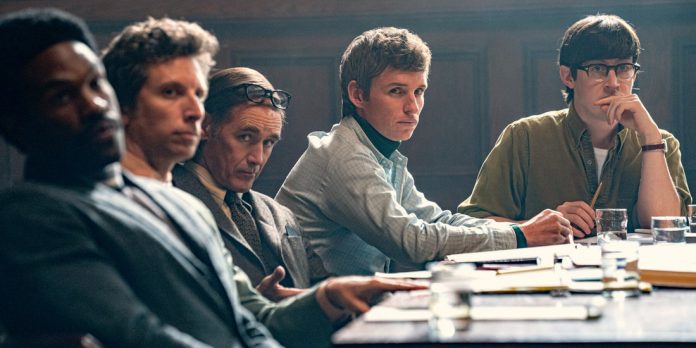 ​By combining two things he’s known for, politics and courtroom drama, Aaron Sorkin delivers “The Trial of the Chicago 7.” With a predominantly male cast, they’ve strategically all decided to campaign for Best Supporting Actor. Should three actors for “The Trial of the Chicago 7” receive a nomination, it would only be the sixth time in Oscar history that this has ever happened.

Ironically, a Sorkin film could receive multiple Supporting Actor nominations as his television series “The West Wing” did consistently throughout its run. But the Emmys could teach “The Trial of the Chicago 7” a valuable lesson – if you’re going to win the category, you must be the clear choice over your costars. If taking down one costar is hard, two is almost impossible. Only five times in the Academy’s 92-year history have three performers contended in the same category for the same film.

Best Actor 1935: Clark Gable, Charles Laughton, and Franchot Tone for “Mutiny on the Bounty.” They lost to Victor McLaglen for “The Informer.”

Best Supporting Actor 1955: Lee J. Cobb, Karl Malden, and Rod Steiger for “On the Waterfront.” They lost to Edmond O’Brien for “The Barefoot Contessa.”

Best Supporting Actor 1972: James Caan, Robert Duvall, and Al Pacino for “The Godfather.” They lost to Joel Grey for “Cabaret.”

De Niro played a young Vito Corleone in the same role that won Marlon Brando Best Actor for the first “The Godfather.” De Niro’s victory is all the more impressive considering his performance is mostly in Italian. While “Part II” did receive three nominations in supporting, John Cazale and his performance as the overlooked Fredo was snubbed.

Who amongst the impressive cast of “The Trial of the Chicago 7” is most likely to be in the hunt for an Oscar nomination? Leading the pack is Sacha Baron Cohen, who may be mostly known for his comedic films such as “Borat,” but he shows new depth as Abbie Hoffman. Cohen has the advantage of giving a flashy performance and semi-narrating the film via his standup routines. Next up is a duo of past Oscar winners: Eddie Redmayne as the clean-cut Tom Hayden who delivers that ending of protest in court, and Mark Rylance as their lawyer. Next up for the Academy’s FYC is a pair of recent Emmy winners: Yahya Abdul-Mateen II (“Watchmen”) and Jeremy Strong (“Succession”). Of the two, Abdul-Mateen II is the most likely as Bobby Seale, co-founder of the Black Panthers.

It has been 46 years since one film occupied three slots in Best Supporting Actor. Maybe the Academy’s acting branch wants to spread the wealth, or possibly it’s because there are more films in contention. If a trio of actors from “The Trial of the Chicago 7” is about to clog up Supporting Actor, and assuming one isn’t about to join De Niro as only the second winner to best two costars, who does this benefit? Currently, prognosticators believe that Lesley Odom Jr. will take home the prize for his performance as Sam Cooke in “One Night in Miami” or Daniel Kaluuya in “Judas And The Black Messiah.” However, it’s still too early to be sure.

Another possibility that should concern “The Trial of the Chicago 7” is a lead actor dropping down to supporting. For example, Odom Jr.’s costar, Kingsley Ben-Adir, who plays Malcolm X, is currently being campaigned for lead and could strategically decide to drop down to supporting if he believes he has a better chance of making the Supporting lineup. Regardless, we should see at least two in Best Supporting Actor for “The Trial of the Chicago 7,” depending on whether or not the race for Best Supporting Actor is about to get more complicated than we believed earlier on in the season. Maybe the love that Academy members have for “The Trial of the Chicago 7” will translate to more nominations than we think? It’s still tough to say but the possibility is there.

How many nominations do you think “The Trial of the Chicago 7” will receive for Best Supporting Actor? Who are you currently predicting? Check out our current Oscar predictions for the category here. Let us know your thoughts in the comments section below or on our Twitter account.