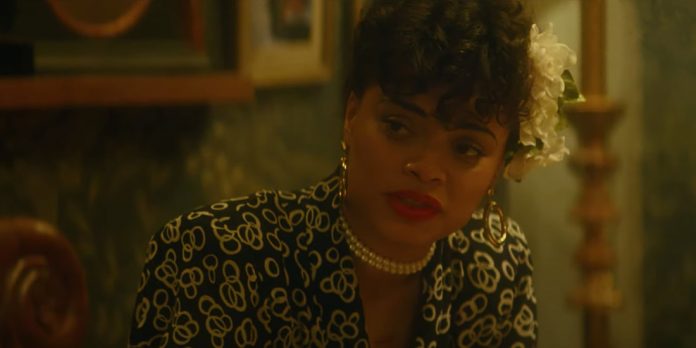 By Matt Neglia
​
Hulu has released the trailer for “The United States vs. Billie Holiday” starring Andra Day, Trevante Rhodes, Garrett Hedlund, Natasha Lyonne & Da’Vine Joy Randolph. It will be released on February 26th, 2021 on the streaming platform.
​
​Click below to see the trailer.

​Plot Synopsis: The legendary Billie Holiday, one of the greatest jazz musicians of all time, spent much of her career being adored by fans across the globe. Beginning in the 1940’s in New York City, the federal government targeted Holiday in a growing effort to escalate and racialize the war on drugs, ultimately aiming to stop her from singing her controversial and heart-wrenching ballad, “Strange Fruit.”

What do you all think of the trailer? I’ve been lucky enough to see the film early and while I don’t think it’s as good as Lee Daniels’ Oscar winning film “Precious,” there are still some elements in play for awards consideration. Andra Day is fiery and soulful in a very committed performance as the iconic Black singer. She’s easily the highlight of the movie. While the film’s screenplay and editing leave much to be desired, the production design and costumes are first rate (as you can tell by the trailer) and could also make a play for some awards consideration. Enough from me though! Let us know your thoughts in the comments below or on our Twitter account.