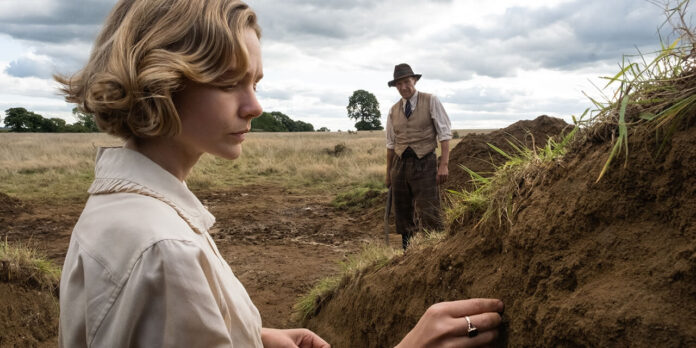 THE STORY – An excavator and his team discover a wooden ship from the Dark Ages while digging up a burial ground on a woman’s estate.

1/13/2021
​By Nicole Ackman
​
​​There are some period dramas that make you want to curl up under a blanket and watch them while it’s raining outside. Simon Stone’s new film “The Dig” definitely falls into that category. Moira Buffini’s screenplay is based on the 2007 novel by John Preston about the true story of the 1939 excavation of the Sutton Hoo, which contained two early medieval cemeteries. While some will find the film slow, fans of the genre will likely enjoy it.

The film opens in Suffolk, England as Basil Brown (Ralph Fiennes) makes his way to the beautiful large home of Edith Pretty (Carey Mulligan), who has offered him a job excavating the mounds on her property. “We’re standing in someone’s graveyard, I reckon,” Basil guesses at the beginning and he turns out to be right. The excavation of the Sutton Hoo was incredibly important to England’s understanding in the sixth and seventh centuries as that period lacks documentation.

Mulligan is as fantastic as always as Edith, a widow passionate about archeology and determined to see the excavation through despite her failing health. Edith was actually 56 years old at the time of the excavation, compared to Mulligan’s 35 years (though, to be fair, Nicole Kidman was originally tied to the role). I wish that the film had delved a bit more into Edith’s fascinating history as a nurse in World War I, but it’s still an interesting role. Archie Barnes is also good as Edith’s imaginative son, Robert, who bonds with Basil and who isn’t as blind to his mother’s deteriorating condition as everyone thinks. Overall, the performances from all are solid, though certainly not a stretch of the casts’ talents and Fiennes’s accent is sometimes difficult to understand.

The film starts to kick into gear a bit when more people arrive to help with the dig and the looming presence of World War II becomes stronger. First of these is Edith’s cousin Rory (Johnny Flynn), who loves photography and plans to join the Air Force. He catches Peggy Piggott’s eye (Lily James), whose relationship with her archeologist husband Stuart (Ben Chaplin) leaves much to be desired.

Stuart is older and completely uninterested in Peggy romantically or sexually, much to her dismay. Despite only being valued for her small size by most of the crew, Peggy bonds with Edith and Rory while helping on the dig. The plotline around Peggy is intriguing, James does a good job with the role, and her costumes (designed by Alice Babidge) are gorgeous. But it feels a bit strange that the film focuses so much on this even though it introduces it fairly far into its runtime.

The real star of “The Dig” is its visuals by cinematographer Mike Eley of the beautiful English countryside. Filming took place near the actual site it’s depicting and the production design of the archeological dig itself is very well-done. The film also has a lovely score by Stefan Gregory that is fairly typical for a period drama but pairs beautifully with the views of the English countryside, even if it’s occasionally overdramatic.

As a small town self-taught archeologist, Basil Brown’s work on the Sutton Hoo excavation went unheralded for a long time. This film seeks to reilluminate his role in the discovery. While it moves fairly slowly, there are more exciting moments like an accident on the site or when they make a discovery. It tampers with history a bit but remains true enough to step away, feeling that you know something about a topic that you likely had never heard of before. Though it’s not flashy or anything particularly new, period drama fans and admirers of Fiennes or Mulligan will enjoy this quiet and unassuming film.