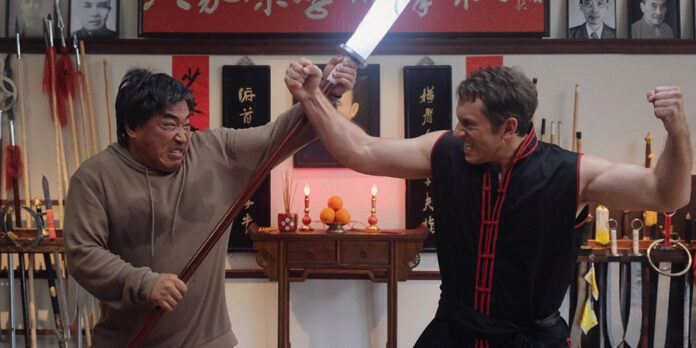 THE STORY – Three childhood kung fu prodigies have grown into washed-up, middle-aged men—now one kick away from pulling their hamstrings. But when their master is murdered, they must juggle their dead-end jobs, dad duties and overcome old grudges to avenge his death.​

​In a year full of martial arts action extravaganzas like “Mortal Kombat” and “Shang-Chi and the Legend of the Ten Rings,” it’s easy to see how “The Paper Tigers” – a comparatively “smaller-scale” indie covering similar subject matter – might get lost in the shuffle and overlooked when released amidst all of these big-budget blockbusters. Moreover, with a lack of any “epic, fantastical elements,” how can such a story ever possibly compete with its higher-profile counterparts? Thankfully, in his feature film debut, writer-director Quoc Bao Tran proves that he doesn’t need any iconic IP or media-friendly main characters to make a movie that is equally as entertaining and even more emotional than its contemporaries. “The Paper Tigers’s” snappy script and endlessly engaging ensemble cast imbue the film with its own singularly stirring spirit and show that you shouldn’t count out the underdog.

As teens, Danny (Alain Yu), Hing (Ron Yuan), and Jim (Mykel Shannon Jenkins) were a trio of uber-talented martial artists that couldn’t be touched, best known amongst their peers as “The Three Tigers.” Trained by the commanding Sifu Cheung (Roger Yuan), each excelled in their craft, earning adoration and acclaim throughout the community. Flash forward 25 years later, and the former friends now find themselves estranged and lacking the finesse of their youth. Danny, Cheung’s star student, and intended successor, is a dejected divorcé working as an insurance agent. Hing has put on a few extra pounds and seems to injure himself even at the mere sight of a fight. As for Jim, though he keeps busy as a trainer, he’s long forgotten the specifics of Sifu Cheung’s teachings. However, when the three hear of Cheung’s unexpected demise, they reunite, putting past grudges and grievances behind them, and search for the truth about his sudden death.

A “revenge plot” such as this may sound stereotypical and stale on the page, but it’s to Bao’s credit that “The Paper Tigers” still feels so fresh and fun despite its familiar trappings. Case in point, Bao crafts the character dynamics within his titular trio with such specificity that it almost seems as if we know these men on a personal level by the time the film ends, enhancing our engagement with the story exponentially. The dialogue he devises is simultaneously side-splitting and skillful at subtly bolstering each individual’s backstory with amusing asides or offhand one-liners, comprehensively contextualizing these characters while still remembering to make us chuckle. In addition, while “The Paper Tigers” isn’t the first movie to make fun of “middle-age malaise” (see any Judd Apatow comedy ever made), Bao’s innovative insight and the specialized setting here help it stand out amongst the crowd.

Bao is aided considerably by a cast that completely understands his brilliant balance of tone, deftly handling both the dramatic beats and the broader comedic banter with ease. Yu is an endearing entry point for the audience, scoring our sympathy from his first scene solely due to his sweet-natured relationship with his son, which serves as the foundation for most of the film’s more sentimental moments (where Yu delivers in spades). However, it is Yuan’s Hing who truly steals the show, gifted with the most gut-busting gags and carrying himself with an irresistibly idiosyncratic charm that just jolts the film to life whenever he walks on screen. In comparison, Jenkins’ Jim is given a bit less to do, but his convincing chemistry with Yu and Yuan still improves our investment in the story’s central trio. Aside from these three, Matthew Page also makes a significant impression as a former foil from the boys’ youth who remains comically committed to trouncing “The Three Tigers” all these years later.

Though the combat scenes here may not hold a candle to the stylistic skirmishes of recent stunt-driven action flicks like “John Wick,” the fight choreography is still reasonably compelling, and Yu, Yuan, and Hing do a decent job wholly inhabiting the physicality of these parts. Likewise, Bao’s direction is distinctly dynamic, placing us right in the middle of these melees. Still, he is careful not to turn his leads into “superheroes” of any kind, occasionally giving in to slapstick-esque twists or turns when these out-of-shape martial artists are amusingly outwitted and forced to reconcile with the fact that they are no longer the “invincible icons” they once were. This choice allows Bao to have his cake and eat it too, delivering on the duels he knows audiences will want to see while still remaining realistic to the current conditions of these characters.

At nearly two hours, it’s easy to see where time could’ve been trimmed here or there or where specific story beats could’ve been consolidated (especially as the narrative initially takes a tad too long to really “get going”), but, for the most part, Bao’s clever script and the cast’s continual commitment are enough to hold the audience’s attention. “The Paper Tigers” may not “revolutionize” revenge stories, and it won’t rewrite the rulebook for movies about middle-aged men reconciling with their pasts, but, in the end, this tough-hearted trio is simply too endearing to not root for. As they rediscover their spark, viewers too will see what exactly made them so unique from the start.