“THE PAINTER AND THE THIEF” 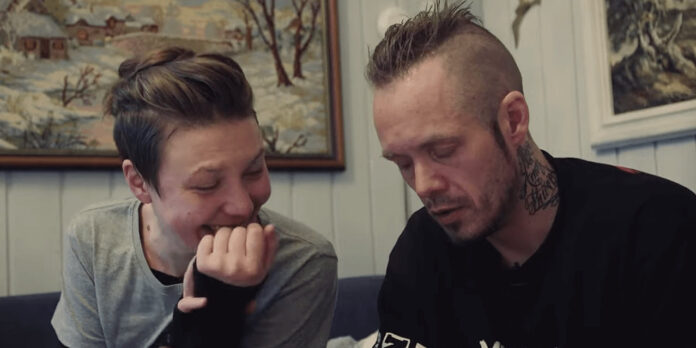 THE STORY – Czech artist Barbora Kysilkova develops an unlikely friendship with the man who stole two of her paintings.
​
THE CAST – Karl Bertil-Nordland & Barbora Kysilkova
​
THE TEAM – Benjamin Ree (Director/Writer)

5/25/2020
By Casey Lee Clark
​
​Two large paintings by Czech artist, Barbora Kysilkova, were stolen from an Oslo gallery. While the paintings were never found, the two culprits were eventually apprehended. Hoping to find out the whereabouts of her precious works, Kysilkova attended the trial and approached one of the thieves, Karl-Bertil Nordland. As they continually met up and she got to know him, she decided to paint his portrait. What follows is an unlikely friendship and bond between these two complicated souls, and, like the paintings in question, there always seems to be something missing from their story.

“The Painter and the Thief“ is a documentary directed by Benjamin Ree that premiered at Sundance earlier this year. The film employs a unique structure of jumping back and forth between the two subjects to tell this story as it unfolds. A particular aspect of this that I enjoyed was learning about each person’s background and struggles from the other: Kysilkova telling us about Nordland’s criminal history and struggles with drug abuse, and Nordland telling us about Kysilkova’s past abusive relationship. It incorporates the unique idea of someone else telling your story, particularly those who hide their true selves and put up a front of being tough and strong.

The film’s structure allows the viewer ignorance as to where the story may go as it unfolds, never exactly hinting to what the outcome of these circumstances may be. However, with the latest trend in documentaries being about uncovering stunning truths and shocking the audience, the twists in this never feel that great or significant. While you keep waiting for the other shoe to drop or something big to happen, it never fully goes there and you’re left wanting more. Without getting into spoilers, the end of the film (specifically the final shot) feels like it came out of nowhere. You’re left wondering what clues you may have missed and should have figured out, but really, it comes across like something was missing and you wonder what the point of the film was to begin with. It’s a conclusion that results in the film feeling hollow.

Because of the subject matter shown surrounding Nordland, there’s a great amount of raw authenticity on screen as you follow his struggles. He’s completely vulnerable in front of the camera when discussing his battle with addiction, his complicated relationship with his family, and his various toxic relationships. It can be hard to watch, but his honesty is refreshing and it’s impressive that the film embraces all of that.

With Kysilkova, the film begins and sympathizes with her, but as it goes on, there are gaps in the story between events and it feels like she is withholding information from the viewer. It feels like there’s something missing, specifically revolving around her role in everything going on in the film, and it doesn’t feel like the film is giving you enough to infer her motivations and inner thoughts on your own. While the first half is engaging, it becomes repetitive and redundant as it goes on and the missing pieces of the story play a factor in slowing down the film and lowering the interest of the viewer as it goes on.

The film is well shot, especially in its shot composition despite being such an intimate story at times. The use of time-lapse to showcase Kysilkova working on her various paintings is a nice way to show her process and the true scope of her work. Though a much smaller aspect of the film, it does highlight a unique perspective on being a professional artist in the modern world and the struggles that come along with that: from varying levels of success over the years and attempting to show pieces in galleries, to the realistic money struggles of choosing that line of work.

I can see why many people would enjoy “The Painter and the Thief“. It shows unique circumstances in a world and culture unfamiliar to most Americans about an unlikely connection between the titular people (both of which do live up to more than just those titles). However, speaking personally, the film drags quite a bit in its second half and constantly feels like something is missing in the final edit or it’s choosing to withhold information from the viewer, but in a poorly done way. The various struggles and conflicts become repetitive, and the film wraps up too quickly and neatly to be believable. Ultimately, you wonder what the point of it all was.  It’s far too withholding to be a fully honest real-life character study and too monotonous to be a true-crime thriller.