“THE ONE AND ONLY IVAN” 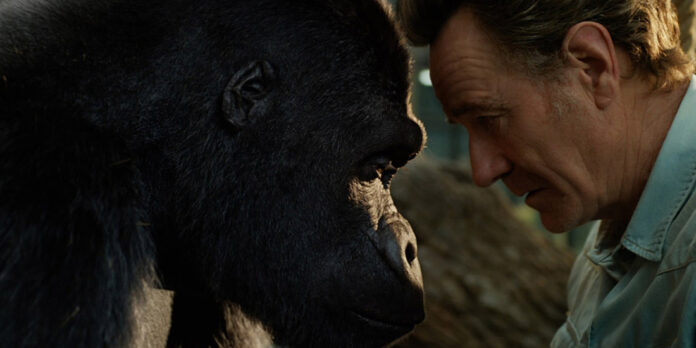 THE STORY – A gorilla named Ivan tries to piece together his past with the help of an elephant named Stella as they hatch a plan to escape from captivity.​

​“The One and Only Ivan” is Disney’s latest live-action/CGI project to premiere on Disney Plus this Friday. The film, an adaption of the bestselling book of the same name by Katherine Applegate, is a moving story based on true events. For years, Ivan the silverback gorilla lived as an attraction in a mall, unable to set foot in the outside world. He is the main draw at the Big Top Mall until business plummets and owner/circus ringleader Mack (Bryan Cranston as the pushy animal handler/over-the-top ringleader) isn’t thrilled. How could people possibly not want to see Ivan? To boost visitor traffic, a baby elephant named Ruby is brought to entertain guests (if you’re thinking this sounds like “Dumbo,” you’re not alone). Ivan realizes captivity is no place for Ruby and sets out on an adventure to set her free.

With “The One and Only Ivan,” director Thea Sharrock and screenwriter Mike White craft a family-friendly movie highlighting the importance of friendship, kindness, and freedom. As I mentioned, this feels a lot like “Dumbo,” right down to the baby elephant forced to perform for a packed circus. However, instead of the focus being on the elephant, this time it’s about the baby elephant’s friend and mentor, the gorilla (Someone has to tell his story too). I would say that the film fits well into Disney’s recent catalog of live-action/CGI hybrid films, and they may even have a new cinematic universe on their hands. We’ll call it the CACU (Circus Animal Cinematic Universe).

Considering this is a Disney film with an A-list cast including Sam Rockwell, Angelina Jolie, Danny DeVito, and Helen Mirren, it’s no surprise that the animals talk. Sam Rockwell brings a lot of depth to Ivan, the gorilla who feels the pressure to make the circus successful as the main draw.  Brooklynn Prince, who was a standout in “The Florida Project,” lends great voice work to Ruby the baby elephant. Ruby and Ivan’s bond is the emotional core of the film, so it’s imperative that the voice work is strong. Thankfully it is. Angelina Jolie has a small but moving part as Stella the elephant, a motherly figure to Ruby and friend to all the animals. However, it’s Danny DeVito as Ivan’s best friend Bob the dog, who didn’t always work for me. I’m sure the character will be a hit for the kids, but the intended comedic relief of fart jokes falls flat at times in a story of animals attempting to escape captivity.

The recent Disney live-action/CGI hybrid adaptions can be hit-or-miss with their visual effects, and this one falls somewhere in the middle. The effects used for Ivan look good, but some of the CG supporting animal characters like the chicken look rather fake. That leads me to something I’d personally change about the film. It’s “based on a true story” and Ivan’s story is indeed, incredible. He’s a gorilla who went from the wild to captivity in a suburban mall to be put on display like an object. We also get a quick glimpse of the real Ivan before the end credits roll. As I viewed the photos of Ivan, I couldn’t help but wonder if this could’ve been a more impactful adaption without some of the childish slapstick jokes. I know, this is a movie catered towards children, but there’s really no need for that. It’s possible to make a movie funny without cheap humor.

“The One and Only Ivan” will probably be a hit with kids when it arrives on Disney Plus this weekend, and there is plenty to like in this movie. The cast is stacked with stars who lend their voices to an affecting tale. But I can’t help but feel that it could have a larger impact if it went a route that told Ivan’s story without the needless slapstick humor.