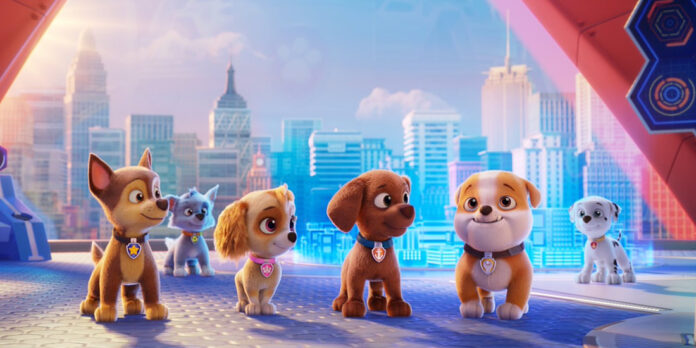 THE STORY – When their biggest rival, Humdinger, starts wreaking havoc as the mayor of Adventure City, Ryder and everyone’s favorite heroic pups kick into high gear to face the challenge. Armed with exciting new gadgets and gear, the PAW Patrol joins forces with a savvy dachshund to save the citizens of Adventure City.

As the father of twin two-year-olds, I can personally attest to the power that “PAW Patrol” has on young kids these days. This unassuming Canadian animated television show has dominated children’s entertainment since 2013. My kids, along with millions of others, clamor for the show, along with the assorted toys, books, shirts, songs, stuffed animals, and any other piece of merchandise you could possibly imagine. The appeal for little ones is understandable; the show doesn’t get bogged down by a deep plot but features some good pups saving the day whenever there’s trouble. A “PAW Patrol” movie was inevitable, and thankfully the film from filmmaker Cal Brunker and the rest of his team doesn’t phone it in. “PAW Patrol: The Movie” elevates the things kids know and love about the show while providing a more meaningful message that we typically get in the 20-minute episodes but here, it’s presented in a lengthier but still lean 86 minutes.

For those who might be new to this crew, “PAW Patrol: The Movie” follows Ryder (voiced by Will Brisbin), a young boy who leads the six puppies that make up the PAW Patrol. Chase (Iain Armitage), the police dog, serves as the de facto lead pup of the group, along with Skye (Lilly Bartlam), Rubble (Keegan Hedley), Zuma (Shayle Simons), Rocky (Callum Shoniker), and Marshall (Kingsley Marshall). While they usually stick to their town of Adventure Bay, trouble in the nearby Adventure City brings the pups out of their comfort zone. Their old nemesis, Mayor Humdinger (Ron Pardo), rigs the election to become Mayor of Adventure City and soon wreaks all kinds of havoc. No, really, this movie is about the rigged election of an unqualified, power-hungry politician. Who said this material was only for kids?

While “PAW Patrol: The Movie” likely would’ve still been successful if it was simply an extended episode of the show, both the story and the animation are clear steps up from what came before it. These puppies and their town have received a significant upgrade as the movie’s visual style adds much more depth and clarity to the world, making the action sequences all the more thrilling. While this may not be Pixar-level quality animation, it’s a stark and much-needed step up from its television origins worthy of the big screen.

When the PAW Patrol is called to Adventure City, Chase initially refuses to go. We find out that Chase used to live in Adventure City when he was very young. He’s traumatized by how big, and scary the city was to him, and he’s terrified to return. Of course, Ryder convinces him to join the team to save the town, but this theme of conquering fear is woven throughout the film. Typically, while wholesome, the short episodes don’t have time to dig into more meaningful themes, making Chase’s journey here all the more impactful.

Similarly, we’re introduced to a resident Adventure City pup named Liberty (Marsai Martin). She’s admired the PAW Patrol for years and dreams about becoming a hero like them. Liberty reports for duty in her little wagon as she helps the PAW Patrol find their way around the city. This idea of belonging and being “good enough” emerges as Liberty seeks to find her place within the group. The themes may not be terribly deep, but they’re written seamlessly into the plot, avoiding any sense of preachiness, thus making it still enjoyable for kids and slightly pleasant for adults.

Like the series, there’s plenty of silly humor that the kids will eat up. There’s the obligatory dance party sequence that feels like a requirement for every non-Disney animated film. The film also has some specific jokes just for parents, like when Skye asks how Ryder can afford their new place in Adventure City. “Officially licensed PAW Patrol merchandise,” Ryder replies while holding up an exact shirt that my children have. “This stuff sells like hotcakes!” He’s not wrong.

“PAW Patrol: The Movie” is very straightforward, but the simplistic plot makes it easily accessible to kids (and parents) who may not be familiar with the “PAW Patrol” series. Having watched far more episodes than I can count, this feature film was a pleasant surprise. It’s a charming upgrade to one of the better TV shows for kids with crisp animation and an empowering message for our little ones while providing just enough for adults to enjoy and partake in the experience with their children as well.